I just had to do it. Despite the excellent write ups about our offense and our defense from Cyentist (or Prairie Springer); I just got the urge to write a preview for tomorrow's Cyclone Gridiron Club Spring Game. It wouldn't be a Friday before a football game if I'm not scrambling to put the finishing touches on a preview that mixes optimism with reality and a dash of Cyclone flavored Kool-Aid mixed in. I did call the Oklahoma State upset after all, but on the same token, I also said Wally Burnham would solve Missouri and beat them in Columbia.

No reaching on predictions here. Tomorrow's game will be best on best (1s vs 1s, 2s vs 2s, etc). None of the Dan McCarney 1st and 3rd string vs 2nd and 4th string with the 2nd string being spotted 21 points. None of the Chizik Scoring System that somehow awarded two points for a first down (how'd that work out for you Gene?).

This is just good, old fashioned football. The last hits we'll see in person until September 1st against Tulsa, which is only 140 short days away.

Jump with me to a preview of the three Cyclone units that we'll see at 2 PM on Saturday.

No "When We Last Left Off.." or "A History" sections this time around, and for good reason. I'll open up the wounds of the bowl game later this summer and again when I preview Tulsa, but for now it's water under the bridge.

What Happens When... Iowa State is on Offense

Many of the spring story lines have centered around the quarterback competition between Steele Jantz and Jared Barnett but there is competition at every single position on this side of the ball.

At running back James White is desperately hanging onto his starting job as young bucks DeVondrick Nealy and Rob Standard breathe down his neck. In the mix is Jeff Woody but his skill set is so specialized in a spread system that he cannot really be considered to be in the "starting" mix. Whomever wins the nod between White, Nealy, and Standard will be the 1A to Woody's 1B. The positive out of all of this though is all four will see the field in the fall and all four will have a chance to prove their worth to fans tomorrow afternoon. Someone will have to step up and fill the void left by Shontrelle Johnson and the competition this spring will go a long way towards developing that. 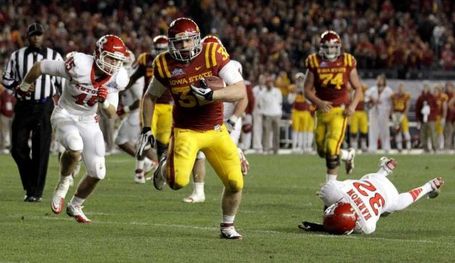 Offensive line coach Bill Bleil is looking to replace All-American tackle Kelechi Osemele and multi-year starter Hayworth Hicks, but is doing so with the deepest offensive line group the Cyclones have seen in the last 10 years. Three starters return but ten linemen saw action last season. When a coach is looking for eight men for a rotation this is an exceptional problem to have. Carter Bykowski filled in for Osemele on the left side more than once last year and held his own throughout the season. The competition here is harder to evaluate but the results should pay dividends in the fall. Keep an eye on Jacob Gannon, who I felt was one of the unsung backups at the guard position last year.

Wide receiver is probably the second most watched battle this year as multiple redshirt freshmen look to replace the departed Darius Reynolds and Darius Darks. Preview favorite Aaron Horne is out for the spring game with a broken collar bone and thus we will get to see more of Jarvis West. Add in the intrigue of Jerome Tiller's position switch and redshirt freshmen Tad Ecby, Quenton Bundrage, and Ja'Quarius Daniels and there will be plenty to watch for here.

I remember the 2005 spring game and seeing R.J. Sumrall lighting people up left and right. Of course, he ended up being the perfect example of the "spring game trap". While Mr. Sumrall was a great Cyclone he was still caught from behind by a Nebraska linebacker that fall on what should have been a game sealing touchdown. At that point we realized that Sumrall just wasn't as fast as we thought in the spring. Numerous Cyclones have fallen victim to this trap with our most recent disappointment being Mr. Real World himself, Bo Williams.

What Happens When... Iowa State is on Defense

Competition is fierce on the defensive line and the defensive backfield but the defense on the field Saturday will look different than what we see this fall.

Roosevelt Maggit is still recovering from his ACL tear in 2011 and has only recently been cleared to be in contact drills. All Big XII linebacker Jake Knott is rehabbing the shoulder that was surgically repaired this winter (we aren't doctors but we're sure popping it back in twice during the Baylor game had nothing to do with the need for surgery). Needless to say, those two injuries are huge for young guys like defensive end David Irving and WLB Jevohn Miller. Both men have been getting valuable reps at the top of the depth chart and should be ahead of the curve come fall camp.

In the defensive backfield the Cyclones must replace departed seniors Leonard Johnson and Ter'ran Benton along with secondary coach Bobby Elliot. Troy Douglas has been brought in from North Carolina to coach up a young, but more athletic, secondary. Jacques Washington is the most consistent performer and he's only a junior with one year of starting experience. Jeremy Reeves is also out this spring recovering from wrist surgery and this gives young corners Jansen Watson, Kenneth Lynn, and Sam Richardson the chance to prove their worth. Douglas has been emphasizing interceptions this spring so it will be exciting to see if this group can force some turnovers on Saturday. 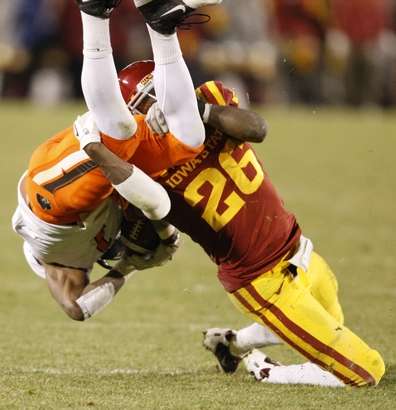 I cannot emphasize enough how important spring ball is to developing this young talent. Paul Rhoads has admitted it, and we have seen it some of it with our own eyes, but a lot of these young players are more athletic than what we have seen in the past. The key will be whether or not they can develop into important players that are as technically sound as someone like Leonard Johnson but more athletically gifted to boot.

What Happens When... Iowa State is on Special Teams

Kirby Van Der Kamp is the known quantity here and will be booming kicks in Jack Trice Stadium again on Saturday. It's unlikely we see the kick and punt return units tomorrow but Jarvis West will once again be a threat to break a kick return this coming fall. New wide receivers coach Todd Sturdy has been promoted into coaching the return units and takes over for Courtney Messingham after his move to offensive coordinator.

Take the kicking game with a grain of salt. Incoming freshman kicker Cole Netten will not join the Cyclones until August so kicking duties will fall to redshirt freshman Chris Moore, sophomore Mitch Amundson, and junior Edwin Arceo. All we can hope for is one of these guys can put it through the uprights in a semi-normal style.

Unlikely to Happen but We'll Light a Dumpster on Fire if it Does: The clouds break, the sun shines, and the rain stays away from Jack Trice Stadium before and during the game. Not a spring game has went by in the last few years without some rain and cold weather.

Not going to give you a score prediction here since it will be pointless but I will say that this is probably the most interesting spring game to watch since the debut of Paul Rhoads in 2009. The depth on this team has not been seen in years and the potential for numerous guys to take starting roles is an intriguing prospect.

It's safe to say that only a handful of guys have starting jobs stamped down heading into the fall (Knott, Klein, Washington, McDonough, Laing, and Farniok are the only ones who I feel safe saying that nothing will change), and this type of competition is incredibly exciting. We obviously want one quarterback to step up and take the job but the rest of the positions will do just fine platooning players in and out. Running back will likely go four deep this year, and it's conceivable both the wide receivers and offensive line could play eight or more.

Defensively it's more of the same. The defensive end position could see see up to five players rotating in and the the tackles will likely play at least four. In the backfield you will see upwards of six guys getting quality reps. The only concern is depth in the linebacking corps and even the development of Jeremiah George and Miller will help stem that.

They say competition breeds success and the 2012 Iowa State football team is in the thick of it. Paul Rhoads knows that to win at Iowa State he and his staff have to develop players better than the other Big XII teams and this spring is a good indicator that it is happening.

The only thing remaining is getting to the game tomorrow. Show up early, partake in some tailgating, grab a 2012 poster, watch the young starts of tomorrow take the field, and know that while someone on the team has to be the next over-hyped Internet sensation, Iowa State as a whole is trending upwards. 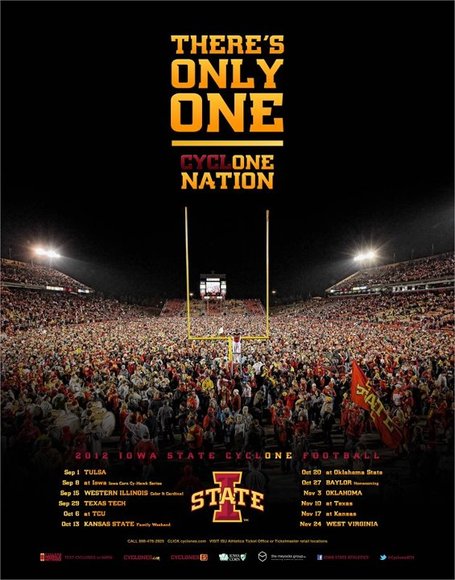