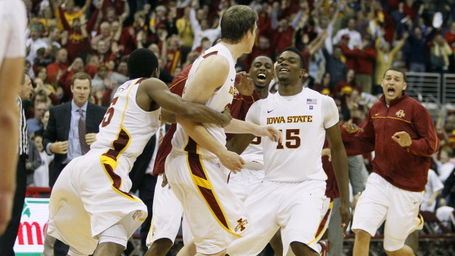 "We are proud to host these four outstanding men's college basketball teams at Wells Fargo Arena. The Big Four Classic will bring friends of the institutions and fans of their teams from across the state to Des Moines for an exciting event the entire Iowa sports community will enjoy." - Greg Edwards, president and CEO of the Greater Des Moines Convention and Visitors Bureau

Last week, the ADs of Iowa's four major basketball schools announced the creation of the Big Four Classic, an annual tournament pitting Drake, Iowa, Iowa State and Northern Iowa against each other. Actually, tournament is a misnomer. A tournament would imply all teams playing each other, perhaps spread out over a couple days. The Big Four Classic provides none of that.

What the Big Four Classic does provide is Iowa State matching up with Drake in 2012 and 2014 and with UNI in 2013 and 2015 while Iowa plays the mirror of this schedule. The inaugural games will be played Saturday, December 15 (a holiday treat!) with the one game immediately following the other.

This format is a little strange for several reasons. First, each school is getting an equal allotment of tickets, good for both games. Are that many Cyclone/Bulldog fans going to show up early to watch the Hawkeye/Panther game, and are any Hawkeye/Panther fans going to stick around for the Cyclone/Bulldog game? So is each game going to be played in front of a half-empty arena?

Actually, there's a better chance that the fans that DO stick around are just going to be heckling the shit out of the Hawkeyes or Cyclones, depending on allegiance. This has the opportunity to turn ugly quickly, as drunken fans with no rooting interest in either team (besides seeing their rivals get their asses kicked) rain boos mercilessly down upon the Hawks/Cyclones. And while it would be fun to see Herky get pegged with a full cup of beer, it seems like it would just create more bad PR than it's worth.

Second, why not make this a true tournament spread over two days? Iowa State could play Iowa and Drake could play Northern Iowa the first day, while the winners and losers of the first games meet the next day. This keeps the Cy-Hawk series intact and preserves Drake/UNI's Missouri Valley conference game, while adding an extra level of competition with a tournament format. And the mythical state championship in basketball has existed in Iowa for years now; this seems like it would be an excellent chance to settle it in on the hardwood in one weekend.

Granted, these are all fairly minor details, and putting this event together required a lot of behind-the-scenes logistics that fans will never know about. And the Big Four Classic does provide some benefits over the current system. The fact that ISU will only play Drake or UNI every other year opens up another game on the schedule. So look out UMKC 'Roos and New Jersey Institute of Technology, Iowa State has an open slot on their schedule saved for you!

Additionally, the fact that the Big Four Classic will be held in Wells Fargo Arena is a nice nod to the alumni living in the Des Moines area who can't get back for games as often as they'd like. Jamie Pollard has been trying to get more Cyclone events in Wells Fargo Arena in recent years to capture the Des Moines market. True, Des Moines to Ames is a 45-minute drive at most, but still! On a weeknight? Going to a game at Hilton puts people back home at nearly 11:00!

But one of the biggest benefits of hosting games at Wells Fargo Arena is the fact that the arena serves beer. Refreshing, life-sustaining beer; a substance that sadly still is not served at Hilton Coliseum or Jack Trice Stadium. The athletic department has been putting feelers out in recent years about the possibility of serving beer at certain games, but nothing has come of these inquiries yet. So this year, for at least one game, fans can watch their favorite team with a frosty beverage in hand, the way God intended. And for that, if nothing else, the Big Four Classic is a success.