Dan Gable Leaves Wife For a Jar of Pickles

Share All sharing options for: Dan Gable Leaves Wife For a Jar of Pickles 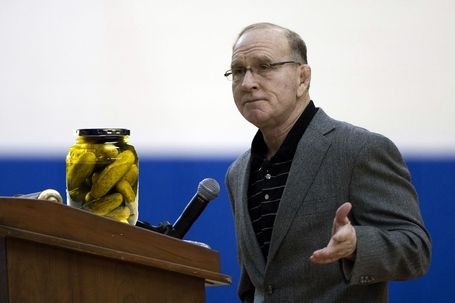 When bandages for an injured knee became difficult for Gable to obtain as he prepared for the 1972 Olympics, who outside of the cloak-and-dagger group knew that five dozen rolls valued at $100 would turn into one of the best investments in Hawkeye history?

In a stunning development Friday morning, Dan Gable announced that he was leaving his wife of 28 years over a disagreement about groceries. The former Iowa State and Iowa wrestler/coach indicated that he was no longer able to reconcile his differences with his wife Kathy over her refusal to buy pickles.

"Look, all I want in my life is a nice pickle spear to go along with my sandwich at lunch," Gable stated today. "Is picking up a case of kosher dills when you're at the store that much to ask? I don't think so, and I let Kathy know it. But she always brought up something about being "allergic" or whatever, I don't know. I wasn't really listening."

Gable's announcement is the latest in a string of high-profile defections for the legendary coach. Gable famously left his alma mater in 1972 to join the Iowa Hawkeye coaching staff after he couldn't, in his words, "get a roll of tape" at Iowa State. More recently, Gable switched dentists after being unable to get the latest issue of Newsweek in the waiting room; he left his recently-purchased car on the side of the road when he couldn't find a good song on the radio; and fled from a Bennigan's parking lot when the parking spot next to the door wasn't available.

Gable clarified these moves further, saying "I'm a guy who knows what he needs in life; be it a roll of athletic tape from a school, a jar of pickles from my wife or my insistence that none of my daughters look me directly in the eye. If I can't get what I need from a place or a person, I'm moving on. It's how I lead my life, and what I try to teach my children. "All or nothing," that's my motto. I tell my kids that all the time. That, and "Eyes on the floor, girls."

Dan Gable is expected to try and remarry quickly, reportedly to the stork mascot of the Vlasic Pickle Company. When it was pointed out that Vlasic's mascot was a fictional cartoon bird and unsuitable for marriage to a human man, Gable quickly left the press conference he had called and ducked out the side entrance of the building.