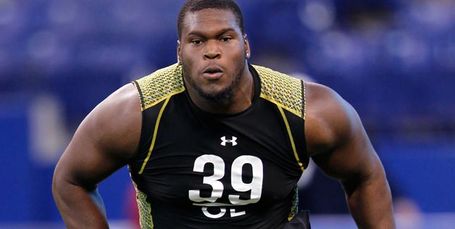 Kelechi Osemele at the combine, demonstrating why he's clearly a giant pussy.

A scout on Iowa State tackle Kelechi Osemele: "I just don't know if football is that important to him. He was raised by women, which bothers me. I mean, how tough can he be? It's not his fault, but it's still reality."

In this context, please read "darnedest" as "most brain-damaged." This quote arrives via an unnamed NFL scout, who may or may not be a time-traveler from 1922; a time when dames knew their place in the kitchen and all boys grew up with a strong father figure to give them whuppin's with a hickory switch when they got out of line. In the small chance this scout is NOT a visitor from a bygone era of casual misogony and chauvinism, the scout is just a huge douchebag. There are a number of questionable things about this scout's reasoning, so it might be helpful to break them down on a point-by-point basis.

Kelechi Osemele is soft: This is the observation that prompted this scout to temporarily lose the filter between his brain and mouth and decide to engage in a little amateur psychology. As anyone who's watched Iowa State over the past four seasons can tell you, Osemele has been the anchor on the left side of the line. He's played in every game since his redshirt freshman season, and started every game from his sophomore year to his senior year. During that time, he's collected an armful of awards, including Sports Illustrated first-team All-American, first-team All-Big XII and Iowa State co-captain in his senior season alone.

Osemele's career has played out in this fashion, despite the fact that he's had to come out of a number of games due to lingering issues from an ankle injury suffered earlier in his career. Osemele started 44 straight games from 2008 to 2011, sometimes wearing braces on both legs that made him appear to be half-man, half-robocop. There are some legitimate complaints about how Kelechi Osemele's game will fare at the next level, but his toughness isn't one of them.

Being raised by women makes someone weak: This complaint, which the scout has structured his argument around, basically makes no sense. As of 2010, 34% of children in the United States were being raised by single mothers. That's a third of the population. In the African-American community, that number rises to 66%. 90% of the players in the NFL are African-American. That means this scout just accused 59.4% of the players in the NFL of not being tough enough to participate in the game they currently play at an extremely high level.

And to go beyond this point, what evidence does this scout have for the claim that being raised by women makes someone weak? It's a completely specious argument, something that probably "feels" right to a certain sect of the population but falls apart completely when looked at more closely. In a 2005 study Peggy Drexler, a Ph.D at Cornell University, found no difference between the "manliness" of boys raised by a mom and a dad vs. a boy raised by just a mom (or two moms). While gender may be a cultural construct, the differences between the men and women are probably genetic. So although Osemele was raised in a female-centric household, it probably had no impact in his aggressive tendencies on the football field.

Women are weak: This is the big one, the logic that this scout's entire argument is predicated on. Again, it's so mind-blowingly stupid that it's hard to even take seriously, but we're in this deep, so why not tackle it head on?

While it's true that the majority of women don't have as much muscle mass as the majority of men, that's probably the limit of their "weakness." It's 2012. Women serve in the military, as police officers, as firefighters, as astronauts... At this point, women have proven just as adept as men in performing the traditionally masculine roles that society offers. And until something radically changes, women are still the only gender able to give birth, which is akin to pushing an eight-pound turkey out of your body.

And being a single parent breeds its own kind of toughness. Working while raising kids forces someone to survive on a limited set of options; working enough to provide for a family while simultaneously making time to take care of their children. That's the equivalent of two full-time jobs, and it's hard to believe that Osemele's mother was able to raise such an accomplished son without being just a little strong.

So congratulations, unnamed NFL scout. At a time of year when every concussion-addled former player and ornery ex-coach gets to say their piece about players participating in the upcoming NFL draft, your quote about Kelechi Osemele truly stands out as being the most idiotic. Hopefully having your words spread across the web and rightfully mocked has humbled you slightly and caused you to think the next time you decide to speak to a reporter.