Share All sharing options for: Leonard Johnson Goes Full Bronson on the NFL 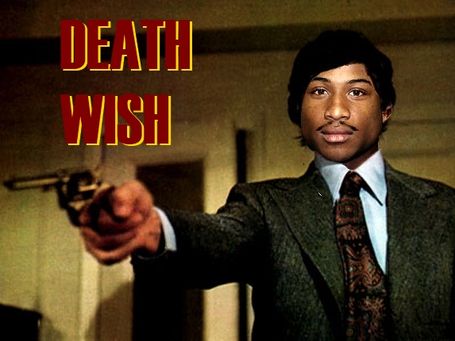 Johnson's loose, cleaning up the NFL... his way.

Hey pallie, it's your old friend, Leonard Johnson. My friends call me LJ. You can call me Mr. Johnson.

NFL, we need to have a talk, just you and me. Mano-a-mano, as it were. Or in this case, mano-a-pendejo.

You see, I'm upset. I'm upset with the way I was treated last weekend. I thought I had an understanding with the league. I came to your combine. Your scouts came to my pro day. I thought we had an agreement that I would be drafted. But you broke that promise, and now we have a little problem.

I'm going to be sending your league a message very shortly. I don't know why the teams in your league chose to ignore our agreement, but that doesn't matter at this point. 31 teams have made a decision, and I've decided to make them regret it.

For I have a very particular set of skills; skills that I have acquired over a long career at Iowa State. Skills that make me a matchup nightmare for wide receivers. Skills that can take away one side of the field. When I'm pissed, I can use these skills to great effect. And you best believe I'm pissed.

Now, one team in your league made a very wise decision. Tampa Bay made a deal with me and contracted my services as an unrestricted free agent. As a mercenary, you might say. Now I'm inside your game. I have access. And I'm coming for every single receiver you have.

No judge. No jury. No appeals. No deals.

NFL, please... Shut up. You want me to be rational? It's mercy, compassion and forgiveness I lack. Not rationality. I produced spectacular results as a cornerback and return man for four years at Iowa State. You know I have the record for most kickoff return yardage in a game, right? Yet teams still questioned my speed based on my combine performance. THAT'S irrational. What I'm doing is exceedingly rational. I'm righting a wrong.

But BECAUSE I'm such a rational guy, I'm letting you know all this ahead of time. I want to give you time to prepare. But know that I am coming for you. I'm not holding anything back. I want the ball. I want your head. I will reduce this league to ash and fire if I have to.

And to think, all this could have been avoided. What were the Lions thinking, picking Jonte Green in the sixth round? Jeremy Lane from Northwestern State? Who the hell is that. WHERE the hell is that? And don't even get me started on Jordan Bernstine. I mean, he was drafted by the Redskins, which is almost worse than not being drafted, but still! LJ deserves some respect!

So mark my words, I will make the Buccaneers final roster. They don't have five corners that are better than me. Do you remember what I did to that UNLV quarterback? That's nothing compared to what's going to happen each Sunday down in Tampa Bay. Receivers will be stymied. Quarterbacks will have nowhere to throw. And I'll be sitting here. Laughing. Because the NFL didn't think I was good enough to be drafted. But you'll understand what a mistake you made. Soon.