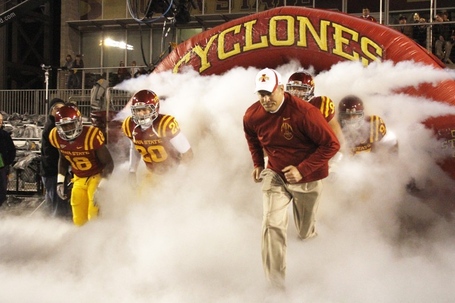 Paul Rhoads, clearly trying to run away and hide from the fans that only want to love him and be with him and GOD, WHY DON'T YOU UNDERSTAND THAT?! (John Andrus/Iowa State Daily)

If I retire at Iowa State, I will be a very, very happy man,” Rhoads said. “If it happened, I’d be thrilled to death. Is it probably going to happen? I would just doubt it. That’s a long time to complete.”

Alarmed by what many fans referred to as "mixed signals" from head coach Paul Rhoads, Iowa State fans entered full-blown freak-out mode yesterday. The incident was sparked by an unreturned text message, which reportedly read, "Hey Paul! Do U liek me? Yes/No/Maybe ;-P." When this text went unanswered for several hours, many fans assumed the worst.

"HE'S LEAVING! Oh my god, this is happening, people! Everybody panic RIGHT NOW!" James Wikoff of Huxley, IA said in a statement prepared for the media. Mr. Wikoff went on for several more paragraphs in a similar fashion, and the press release was mottled by what were presumed to be tear stains.

Several fans were less coherent. Amy Goodman, a sophomore at Iowa State, was found bashing her head against the wall of the Campanile Thursday night, while her boyfriend Alan Cardoza could be found screaming obscenities at the sky a few yards away. When he asked how he felt about the interview, junior Jordan Chabon simply stated; "AAAAAAAHHHHHHHHHWWGGGGGGHHHHHHHHHHH!!!!" Mr. Chabon then collapsed into the fetal position on the floor, where he stayed for several minutes.

It should be noted that Paul Rhoads just signed a ten-year, $20 million contract extension last winter that will keep him employed at Iowa State well into the next decade. When asked about his future as coach of the Cyclones in an interview last Wednesday, Rhoads replied, "If I retire at Iowa State, I will be a very, very happy man."

Still, the unreturned text message and the fact that Rhoads has not unequivocally stated that he will never, under any circumstances leave Iowa State has some fans feeling nervous. "I mean, he's leaving the door open, right?" said Paul Tyler, an ISU alumnus from Chicago, IL. "Rhoads says he's happy here, but he hasn't come out and SAID he's not taking another job yet, has he?" When it was pointed out that Rhoads said almost exactly that in the aforementioned interview, Mr. Tyler waved his hands dismissively and returned to hyperventilating into a paper bag.

While most fans have accepted the fact that Paul Rhoads will be the head coach of the Cyclones for the foreseeable future, a vocal minority continues to read into the smallest details of their relationship. "Why won't he just text back?" complained Jennifer Liu, a fan from West Des Moines, IA. "He must be looking for something better. And I know the way other programs look at him. Throwing themselves at him. Boston College and Tennessee are just being shameless about it, too. Those SKANKS."

But readers should remember that this behavior is quite in character for a certain section of the Iowa State fan base. Cyclone message boards exploded with rumors linking Paul Rhoads to the vacant job at the University of Pittsburgh in 2010 and 2011, despite no evidence linking Rhoads to the job. A similar meltdown occurred earlier this year when the charismatic coach refused to comment on his plans for the weekend, and fans were reduced to hysterical sobs in 2009 when Rhoads wouldn't answer the question, "Where is this relationship going?"

"I... just... love... him... SO... much!" Matt Roper of Minneapolis, MN, cried through labored breathing. "What am I going to do without him?! One day he's going to get on that motorcycle and ride off with Maryland, and I'll be ALONE. But I won't let that happen! I'll KILL myself before I let that happen!" At this point this reporter stopped trying to reason with fans and backed slowly out of the room.