Share All sharing options for: WRNL PAC: Countdown to Armageddon

My friends, it's time to talk about the longhorn in the room.

Over the past four years, our beloved conference has seen one third of our original members defect to other conferences. Some left to spite their longtime in-state or border rivals, while others simply wandered off after discovering that it was legal to smoke weed during away games in California and Oregon. Regardless of motive, the instability caused by these defections nearly killed off the Big 12 in 2010 and 2011.

Hell, at one point last year it was so bad that Cyclone and Wildcat fans were actively hoping their teams would end up in the Big East.

So who was the de facto leader of the Big 12 for those four years? Which team had enough money to just buy off the NCAA and still have enough left over to gold-plate the inside of Charlie Weis' colon, yet continued to demand unequal revenue sharing? Which school was willing to let an entire conference crash and burn just so they could get their shitty network on three dozen TVs in Texas and throw up a giant middle finger to College Station? 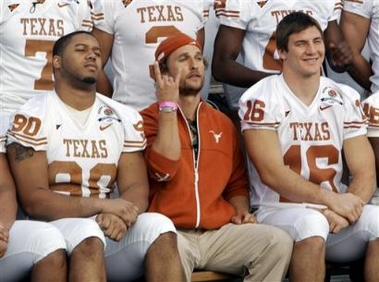 It is time to throw off the shackles of our Bovine overlords. Let us never forget what they were willing to destroy in order to advance their own greed and burnt orange agenda. We as a conference simply can not afford to give them another 4 years in the big chair. (Or another four years with their finger hovering over the big red button.)

Our latest 60 second advertisement illustrates the inherent dangers of voting Bevo into office for another 4 years, with a little help from the 1964 LBJ campaign archives.

Under the leadership of Cy, a much greater focus would be placed on ensuring the long term stability of the Big 12. Fans could sleep well at night, knowing that Iowa State is constantly working to strengthen this conference. (After all, we've got the most to lose if it collapses.) No more worrying that you could wake up to find your team has been traded to the PAC 12 for two cartons of smokes and a bottle of rum by Texas like some high-priced prison bitch.