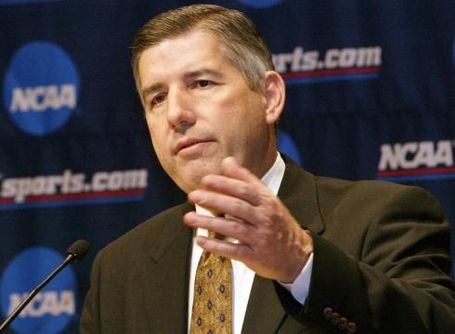 The Big XII announced its new commissioner last week, and it's a familiar face for Iowa State fans. Bob Bowlsby, the former Iowa, current Stanford athletic director and professional striver will begin overseeing conference matters on June 15th. An Iowa native, Bowlsby has been steadily climbing the professional ladder for three decades, starting his athletic department career at Northern Iowa in 1984, working at the University of Iowa for 15 years and jumping to the best overall athletic department in the nation in 2007.

After the remaining Big XII schools collectively stepped back from the ledge and finally ended commissioner/perpetually-stymied-lump/insane despot Dan Beebe's reign of terror last year, interim commissioner Chuck Neinas was able to provide some stability for the conference. TCU and West Virginia were added in all sports to bring the conference back to ten members. All institutions in the Big XII agreed to a six-year grant of rights for TV exposure, and there's talk of extending those rights for 13 years. When TV rights are tied to the Big XII for that length of time, it makes it almost impossible for a school to leave for another conference. While this kind of coercion isn't ideal, it may be the only way to keep some schools (cough **TEXAS** cough) from constantly looking for a better deal.

So while Chuck Neinas has done much of the heavy lifting by calming everyone the fuck down, Bob Bowlsby still has a lot of work ahead of him as the head of the Big XII. Let's take a look at the main issues he'll have to deal with in the Big XII, and how he's handled similar issues in the past.

Big XII's Expanding Horizons: The Big XII needs to add at least two more members and a conference championship game to remain a power in the world of college football. This isn't really opinion anymore; it's almost a fact at this point. While the format of the new four-team playoff isn't finalized, it will likely include the champions of the highest-ranked conferences at the end of the year. The Big XII needs to be one of those four conferences to stay relevant, and a 12-team league and championship game can help keep the conference high in the rankings.

There are a lot of rumors flying around about who the Big XII might approach, but it's almost universally agreed that the Big XII will expand back to at least 12 members, most likely by 2013. Early favorites included Big East survivors Louisville and Cincinnati, with BYU thrown in as a wild card. Lately, focus has shifted to Clemson and Florida State, which initially sounded so ridiculous that it was often rejected outright. But apparently both schools have real problems with their current situation in the ACC, and the Big XII would be more than willing to provide a new home.

At his introductory press conference, Bowlsby didn't tip his hand on who the Big XII might pursue, stating, "I'm not going to presume a direction we will go. It has to be expansion that has at its roots enhancement of the league." This is encouraging, because it indicates Bowlsby recognizes that expansion for expansion's sake is useless. The Big XII is going to need to add teams that a) have media value, b) have a large following or c) add strong competition to the Big XII. Getting teams with all three of those factors would be the obvious choice, but presumably there aren't many available teams out there that would be willing to join the Big XII right now.

BB Got A TV Eye On Me: Most of the work has already been done on the conference's new TV contract, as Big XII presidents verbally agreed to a new 13-year, $2.6 billion television deal with ESPN and Fox this week. While this deal isn't finalized, it does indicate that all schools in the Big XII will be much more financially secure than they have been in the past.

But Bowlsby will still need to iron out a few details with this new TV contract. If the Big XII does expand and add new schools to the conference, will the television money grow as well? If so, it would provide an extra incentive for the Big XII to expand, as well as give schools a stronger financial incentive to join the conference. And if the Big XII does expand back to 12 teams, the conference will need to have a championship game again. Championship games can be lucrative for conferences; the Pac-12 netted around $14 million for their first title game last year.

Bob Bowlsby will be in familiar terrain here, as he was instrumental in helping the Pac-12 negotiate their monster television deal last year. He also helped form the basis for the Pac-12's unique conference network setup, where two geographically close schools share one channel. In a conference like the Big XII which allows schools to sell their third-tier rights, this could be a way for schools to band together and compete with the behemoth ESPN-branded Longhorn Network.

Strokin' Egos: This might be most important, but least quantifiable job that Bowlsby has ahead of him. By all accounts, Chuck Neinas was excellent at getting the competing interests in the Big XII to work together for the common good of the conference. But Neinas is a forceful personality and had a lot of credibility from his time as Big 8 commissioner. Bob Bowlsby is reportedly less of a personality and more of an administrator. Managing ten school's interests as commissioner is quite a bit different than managing one school's interests as an athletic director. Will Bowlsby be able to manage each school's competing issues? Will he be able to keep Texas and Oklahoma's egos in check when things don't continuously go their way?

Additionally, Bowlsby and Texas athletic director DeLoss Dodds have had a long professional relationship, which is slightly worrying. One of the major complaints with Dan Beebe's leadership was his perceived acquiescence to Texas' desires. Bowlsby will need to take a firmer stance with the Longhorns than Beebe did, or schools in the Big XII may start looking for exits the way Texas A&M and Nebraska did.

But Bowlsby has worked with forceful personalities at Stanford, and coaches have thrived under his direction. No one would accuse Jim Harbaugh of having a milquetoast personality, but he performed well enough under Bowlsby's direction that he was able to jump to the NFL after four years at Stanford. And Bowlsby helped hire Larry Scott to lead the Pac-12 conference, and Scott's leadership has given the Pac-12 a much higher profile than it had previously

So while Bob Bowlsby has a little bit of work ahead of him, his acceptance of the job of Big XII commissioner is a sign that the conference is working back to a stable position. Bowlsby signed a contract extension that would have kept him employed at Stanford until 2017. He had the athletic department running smoothly, and Stanford won the Director's Cup every year that Bowlsby was the athletic director. So Bowlsby didn't need to look for work, but he obviously felt that commissioner of the Big XII was a good step up from his current position. And that's an encouraging sign for the health of the Big XII, and for Iowa State moving forward.