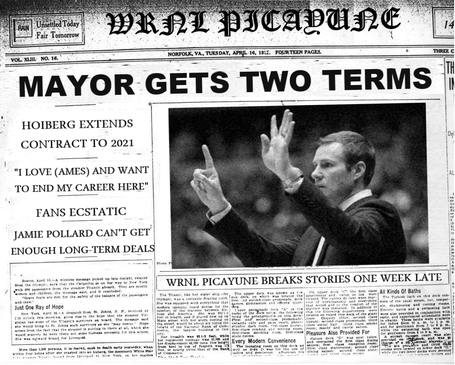 Extr'y, extr'y, read all about it! Mayor of Ames elected to two more terms!

Hullo, sir! Yes, you sir! You're a fine gent o' the manor, I reckon! Spare a haypenny for this special edition of the WRNL Picayune? Content as fresh as last week's fish, I say!

Wot's that, guv'ner? This 'eadline's a week old, you say? Cor blimey, that can't be right! That's as unlikely as a turn-o-the-century Cockney newsboy pitchin' yellows in the Midwest. 'Ere, 'ere, just take a peek at the latest edition!

Ames, IA: In an unusual development development last week, the city of Ames, IA elected its mayor, Fred Hoiberg, to an additional two terms before Hoiberg had finished his first term. The extra eight years will be added to his current term as mayor, allowing Hoiberg to serve as mayor until 2021.

"It's really an honor," Hoiberg said in a press conference. "I've only been on the job for two years, but people really seem to like my leadership."

Indeed, it's been a successful first term for Fred Hoiberg. After Ames' wildly unpopular previous interim mayor, Greg McDermott resigned under pressure of impeachment, Hoiberg was thrown into a bad situation. With a ragtag city council left over from his predecessor, most outside observers expected Hoiberg to struggle for a few years.

But Hoiberg was able to make immediate improvements to Ames by setting up a free-trade agreement with mayors of towns like East Lansing, MI, Minneapolis, MN and State College, PA. Hoiberg explained, "Iowa State had been exporting way too much product in the previous years. Harrison Barnes, Nick Collison, Kirk Hinrich, Raef LaFrentz, Marcus Paige... the list is endless. We had to correct the trade imbalance to remain competitive."

As mentioned earlier, it's extremely unusual for a mayor to be elected to an additional term before the first term is finished. It's even more unusual for a mayor to be elected to two consecutive terms at one time. But it speaks to the popularity of Fred Hoiberg in Ames. Jamie Pollard, Iowa State's athletic director agreed, "C'mon, who else is Ames going to elect as their mayor? Fred hasn't paid for a drink or meal in this town in three decades. His name wasn't even on a ballot! These were all write in votes!"

Pollard has every right to be pleased, considering he drafted Hoiberg to replace Greg McDermott. The long term stability that Hoiberg's election provides also fits Pollard's management style. "Look, I'm not comfortable unless a coach is going to be here for at least ten years. Fred is going to be here until 2021 and Paul Rhoads will be here until 2022. To be honest, I still think that's a little on the short side."

Pollard continued, "Hell, they don't even have to be good coaches. My god, Greg McDermott had a ten-year contract. Gene Chizik's contract was extended after he went winless in the Big XII. Gene Chizik! Honestly, I just crave the continuity."

That continuity is ensured with Fred Hoiberg's re-election, who could potentially retire as Ames longest-serving public mayor. While Hoiberg's tenure is still far short of Johnny Orr's 14-year residence, this new eight-year term will allow him to serve for at least 12 years. And given the results of Hoiberg's first two years and his age, it's not unlikely that Hoiberg will end his career as Ames' most beloved public servant.