Stormin' Around the Big XII: Welcoming Our New Overlords Edition

Share All sharing options for: Stormin' Around the Big XII: Welcoming Our New Overlords Edition

As of right now West Virginia University and Texas Christian University are official members of the Big XII.

It has been said numerous times before, but most Big XII fans see the addition of these two teams as an upgrade over the departed Texas A&M and Missouri. TCU brings recent success and a reengaged fan base while West Virginia brings that humble, happy to be here mentality that their brethren in northern reaches of the conference have lacked for a long, long time.

By now you have likely heard that the BCS is dead. There has been a lot written about it and time will tell how things will shake out when the first games are played on December 31, 2014. However, one thing is for certain: We aren't going to be bashful about taking credit for its demise. 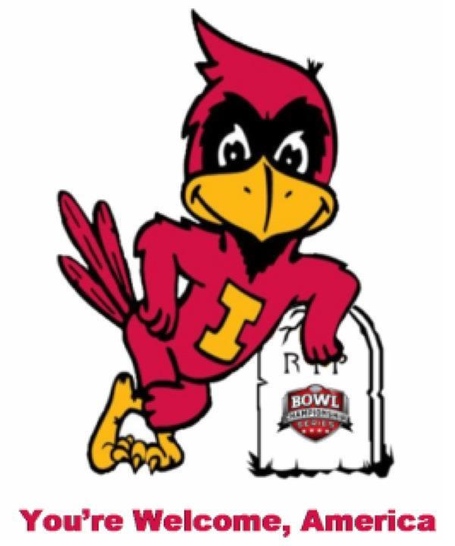 Bob Bowlsby was introduced as the new Big XII Commissioner back in May. Bob is from Iowa and served as the University of Iowa's Athletic Director from 1990 to 2006. While no one is expecting Bob to cater to Iowa State in the same manner that Dan Beebe was Texas and DeLoss Dodd's whipping boy; I think we all expect to have a commissioner who is fair and weighs the opinions of all ten members when making decisions regarding the conference's future. Plus who can argue with a commissioner who will help celebrate TCU's entrance into the Big XII with their fans?

Athlon has already come out with their preseason predictions and they aren't very high on Iowa State. The Cyclones were picked to go 4-8 (2-7) in 2012. Chris Williams has an excellent Q&A with Athlon editor Steven Lassan that sheds some light on their predictions.

What amazes me about Mr. Lassan's responses is how high he seems on Iowa State in general but how easy it is for him to knock down Iowa State based on certain unknowns such as the quarterback race and Shontrelle Johnson's health. This would not be such a noticeable issue had he not actually used unknowns for other schools as a positive for Iowa State. I think the prediction is a bit too much on the conservative side, and he alludes to as much with his comments about Coach Rhoads, but the only way to prove the prognosticators wrong is to back it up on the field.

Right now I am not backing off my seven win prediction. The team lost performers at key spots but has gained depth in others. As long as either Steele Jantz or Jared Barnett can put together capable performances and minimize turnovers this team is coached well enough to give itself a chance in each and every game.

For those of you too lazy to follow the link above, Athlon predicted Oklahoma and Texas to go 1st and 2nd this season. West Virginia pulls up at the 3 spot ahead by two games on 4th place Oklahoma State. Only Kansas is picked below Iowa State.

An Early Look at Week 1

Tulsa @ Iowa State: A hell of a test for the Cyclones early on but Tulsa lost exceptional quarterback G.J. Kinne and must replace him with Cody Green who last visited Jack Trice Stadium as Nebraska's patchwork replacement for Taylor Martinez in 2010.

Savannah State @ Oklahoma State: For the most part this better be a snoozer. The biggest things to watch for will be Mike Gundy's tempo, how much the offense relies on Joseph Randle, and whether or not Wes Lunt was worthy of being named the starting quarterback.

Wyoming @ Texas: The only other Big XII team embroiled in a quarterback controversy, Texas must decide whether they want to have dual threat quarterback David Ash take the reins or if mini-Colt McCoy is the next... well... Colt McCoy.

Marshall @ West Virginia: If Marshall was in a BCS conference then maybe this would be worthy of Riot Bowl status, but they're not, and West Virginia still has Geno Smith.

South Dakota State @ Kansas: The only reason to watch this game is to see how many footlong subs Charlie Weis downs on the sidelines before halftime.

Missouri State @ Kansas State: A true test of whether or not 2012 will be different from 2011 for the Wildcats as Collin Klein gets injured on the first series of the game.

Oklahoma @ UTEP: The only game to feature a Big XII team on the road in Week 1 and the only one where the team's starting quarterback can cross the border to moonlight as a Mexican drug lord.

Northwestern State @ Texas Tech: Tubberville only cares about beating Iowa State at this point, so... yawn.

And just for kicks: