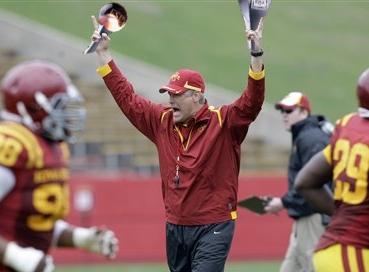 Well Cyclone fans, guess what? Iowa State didn't win the ESPY for biggest upset of 2011 last night. Whoop-de-fuckin'-do. I'd say I'm upset about our upset not being recognized, but that would be a bigger lie than Craig James' case against Mike Leach. Whoops! That's another fraud you helped perpetrate, ESPN!

No, I'm not upset. But I am disappointed for the guys in my program. They work so hard, and put forth such a great effort day in and day out, it's hard to see them lose. Especially after the way they clawed their way back in the game against OSU last year. Iowa State came back from a 17-point third-quarter deficit to win the game against the number-two team in the country. THAT's impressive. THAT's an upset.

And another thing: Our game last year almost single-handedly broke the BCS. You're welcome, America! Now we at least have a rudimentary playoff system in place. Iowa State set off a seismic shift in the landscape of college football. Doesn't that count for anything?

You know, to keep them focused I always tell my guys, "Never too high, never too low." Well, somebody at ESPN was WAY too high to rank the Cyclones' upset this low. 'Cause who DID win the award for best upset? The Los Angeles Kings! Hockey?! What the flying fuck is wrong with this system?

You know what? Fuck you all. I didn't want this award anyway. The ESPYs are a sham. It's a ridiculous ceremony put on by one of the most corrosive influences in sports today to stroke their own ego. The ESPYs haven't been relevant since Norm McDonald hosted and decided to ruthlessly mock every single person in the building. Ken Griffey Jr's pained expression is worth the broadcast alone.

And what's the fucking point of giving Grammy-style awards for sports anyway? Its sports! Competition set up between individuals and teams specifically for the purpose of determining the better athlete! The better athlete then often receives an award, trophy or medal! The ESPYs! More redunant and unnecessary than the ESPYs! That's right, ESPN, I don't have an example of anything that's more useless than the ESPYs! You've actually created the most unnecessary thing on the planet!

But hey ESPN, thanks for the free trip out to Los Angeles. I know Jared Barnett, Leonard Johnson, Jake Knott and Jeff Woody appreciated the trip. PS - We left a little surprise for you in the green room. Hint: Home runs aren't the only things that can be "upper-deckers."