BOB STOOPS IS THE BATMAN

Share All sharing options for: BOB STOOPS IS THE BATMAN

Well folks, its time. Tonight the world finally gets to see what crazy crap Christopher Nolan has cooked up for the ending of his Batman Trilogy, the Dark Knight Rises. Nerds every where will wait in lines, while wearing capes and costumes for hours and stay up until the witching hour to watch the supposed masterpiece. And I don’t blame those nerds one bit. These movies have been nothing short of epic. Hell, if we all at WRNL weren’t all responsible adults (HA!), we’d wear capes, stay up all night, and stand in line as well.

So for all of you inner nerds waiting in line today, we at WRNL bring you a mixed genre gift to pass the time until the show tonight, Big 12 Head Football Coaches as Batman characters.

(language warning after the jump)

This guy runs Gotham/Big 12 with seven conference championships even if he is a sniveling little Hawk shit who wears a visor. Batman & Stoops have every advantage; money, tradition, and a visor. But even with all those conference titles & money, every dog has his day and beats Batman to a fucking pulp every now and then. Personally, I think the visor is a bedazzled utility belt with a hidden gas gun and bat shaped throwing knives. 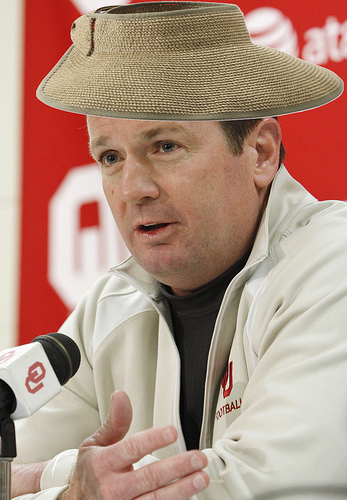 Robin is best known for being Batman’s Sandusky style sidekick. Not that Dana is participating in that kind of thing but Robin sure does. I mean there is just something not right about guys named Robin and Dana. Both guys have the entire dictionary to select a hero alias/name and they pick Robin and Dana? How about Boner Island Hitler Killer-man or Sex Sludge Mud Butt-boy! Those names are a lot better. Even valtrex man is a better super hero name.

"Ra's Al Ghul ("demon's head" in Arabic) is a centuries-old eco-terrorist. He knows Batman's secret identity. He utilizes special pits known as Lazarus Pits which enable him to evade death, and live for centuries." - Wikipedia

Yeah, that sounds about right for Bill. Oh that, and they both think kids these days are too damn loud with their bee-bops music and prescription pills. Crazy old coot.

Some men aren't looking for anything logical, like money. They can't be bought, bullied, reasoned or negotiated with. 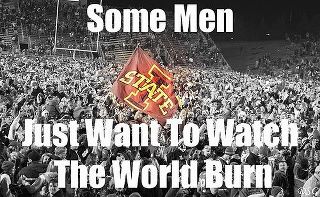 Not quite as badass as the Batman, but he still runs the Gotham Police/Big 12. Commissioner Mack has all the advantages in the world, but can’t quite beat/catch all the Big 12 Arkham crazies running around. But who can blame him; Batman beats him to the punch most of the time.

Charlie Weis is the definition of sex appeal. This guy has big old man titties & and a fat upper crotchal region. What else can a gal want in a guy? The gout, several rashes, and a crusty asshole are the correct answers, and we're pretty sure ol’ Chuck’s got those too. 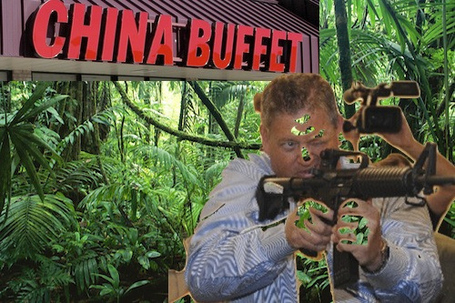 That man can find a China Buffet anywhere.

Cause nothing screams girl, like a grown ass man screaming he’s a grown ass man. Even so, Batgirl can be pretty badass with some banging double D’s smashed into a latex suit. Gundy is set up to be a power in the new Big 12, but our advice for the Batgirl is to stay away from the Big 12 Joker. 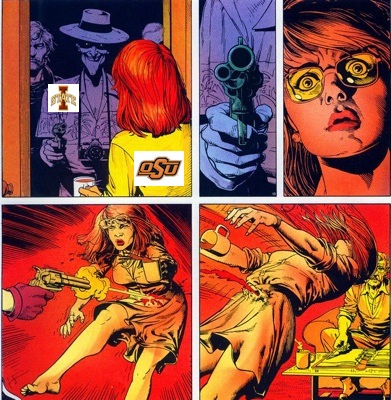 And what that cartoon doesn’t show for you super nerds, is yes, Gundy was raped.

Baylor believes in Art Briles, unfortunately, no one else does. Its Baylor/Gotham and they will never be a consistent winner. Sure Harvey Dent slows down Big 12 crime from time to time, but he’s always going to live off of a RGIII coin flip. 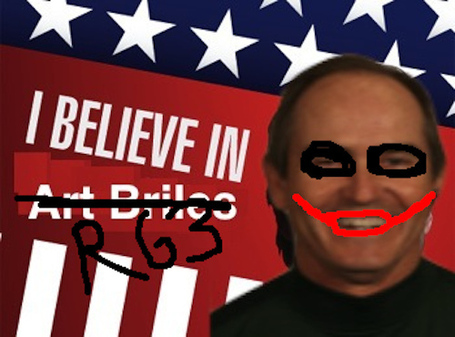 Mr. Freeze is supposed to be this badass mofo who can destroy Batman, the cops, and all of Gotham/Big 12, instead he’s a giant douche. Tuberville hasn't exactly been cooling off Big 12 offenses since joining the Big 12 rogue gallery. Letting the Big 12's Joker whoop up on him by an average of 25 points per game is the ultimate magic trick.

Patterson or Bane will fuck you up. You wouldn’t think it to look at the guys (Purple?), but they’re straight cold killers. Steroids are a hell of drug, and so is playing a weak MWC schedule. They can both build your confidence and make you think you're better than you actually are, when actually you just have a shriveled up nut sack. I mean, just think about Bane’s nut sack for a second. They probably look like raisins encapsulated in a rotten peanut shell… covered in pubes. 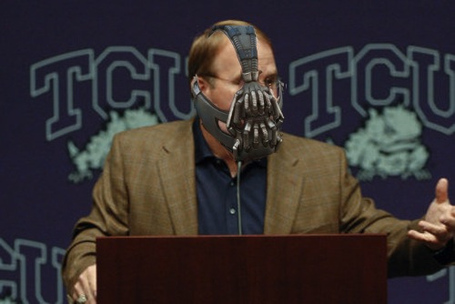 So, there you have it Nerds! I hope you enjoyed it and yes, you’re probably still standing in line waiting for the show. No worries though, we’ll be cutting in front of you to the front of the line shortly. We wouldn’t miss this movie for the world.