With football season rapidly approaching, it dawned on me that we here at WRNL have yet to complete our annual briefing of the unfamiliar schools on the Cyclones schedule. Welcome to our universally reviled "Know Your Enemy" Series: A guide to the unfamiliar schools on the Cyclones’ football schedule that has been accused of xenophobia, misogyny, and religious bigotry. It is time to enter a new edition in this series as we begin to welcome Big 12 newcomers. After last week’s roast of TCU, we move on to everyone’s favorite Big 12 newcomer, the West Virginia Mountaineers.

STADIUM: The West Virginia University Mountaineers take the field at venerable, wait… Is that? No. It can’t be. Yes, it must be. Apparently WVU plays at Jack Trice? OHHHH. Never mind. They just play in a building that looks exactly like Jack Trice, but just contains half as many teeth and half as many gene pools ("West Virginians = hicks" jokes are really fresh and original, amirite?). But at least they’ve bowled in those endzones. 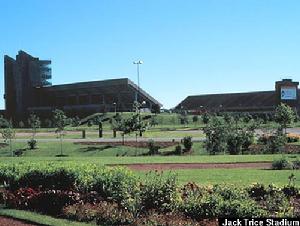 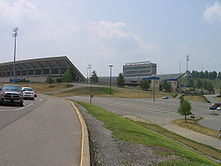 TEAM: West Virginia is kind of Iowa-esque, in that they’ve spent the past few years getting into better bowl games than they really deserve by being part of a god awful conference, but then they turn around and just win bowl games. Geno Smith is a hell of a quarterback and a Heisman candidate. WVU will probably beat ISU, but hey, I said the same thing about OK State last year.

Perhaps one of the more interesting things about the Mountaineer team is that they’re coached by mangina-rocking, skullet adorning phenom, Buffalo Bill. 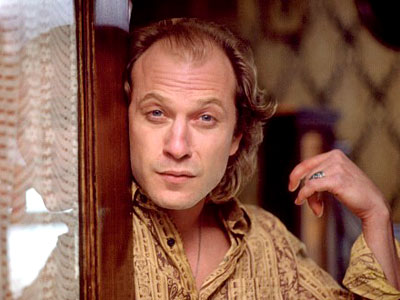 When this crazy bastard isn’t throwing young ladies into basement wells and tucking his crank between his legs, the Mount Pleasant native can be found pounding Red Bull/vodkas, getting thrown out of casinos, and making defenses put the lotion on their skin (lest they get the hose again).

MASCOT: The Big 12 is home of some of the worst mascots in big time college football. Between the pedo-staches at TTU and OSU, and the animal-head/human body set up advocated by KSU and TCU, the conference really has some creepy mascotting. 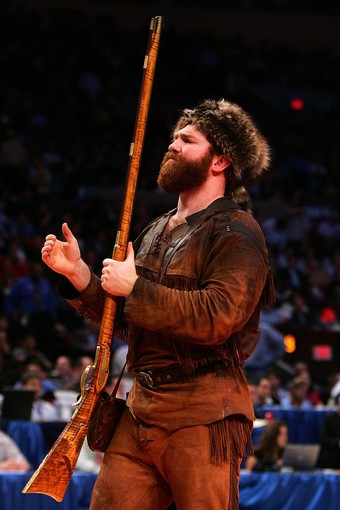 After having undertaken a thorough search, which undoubtedly entails running Morgantown’s homeless through a daunting series of physical drills, WVU finds the most spirited hilljack meth-head Jesus Christ look alike available, and dresses him up in a bear-skin suit and a coon-skin (recycled from actual lynchings! Wait. Real Virginia are the racists; our apologizes) hat. Then they give him a loaded gun and run around the field for free moonshine and handjobs from Rich Rodriguez. There’s nothing to be concerned about here.

TRADITIONS: West Virginia’s most well known tradition is just generally behaving like a bunch of wild-ass hillbilly sociopaths. This can manifest itself in many forms, from assaulting and berating visiting fans, to burning couches. SERIOUSLY. What kind of low-rent buck toothed hilljack inbred fanbase publicly burns stuff simply for the hell of it? DON’T YOU KNOW HOW DANGEROUS BURNING THINGS IS WEST VIRGINIA? Someone could get hurt! Its damn embarrassing that the Big 12 has embraced a university whose students are so fond of setting furniture and other objects ablaze. 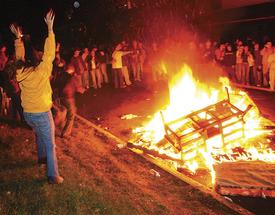 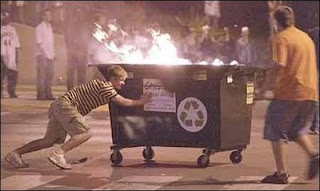 However, perhaps my favorite West Virginia tradition is the one of being fucked in the ass by Paul Rhoads and Wally Burnham. What do I speak of, you may ask? Well, in 2007, WVU was probably the best team in the country, but they lost two close games to USF and a 5-7 Pitt squad, in which the high flying unstoppable attack of Pat White and Steve Slaton were ground to a halt by some scrappy defense. These scrappy defenses were helmed by none other than Burnham and Rhoads. Lord only knows what the Rhoads/Burnham tea-bag combo has in store for WVU this year! 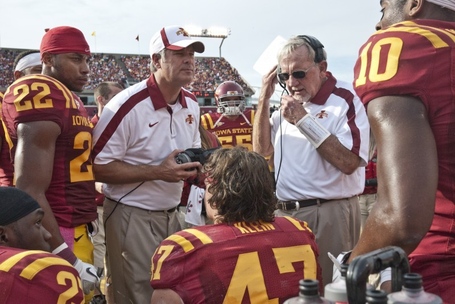 AGAINST ISU: We’ve never played each other, so this section of KYE is a big old Who Gives a Fuck? Salad.

Welcome to the Big 12, WVU. And yes, Kansas does have a purty mouth.