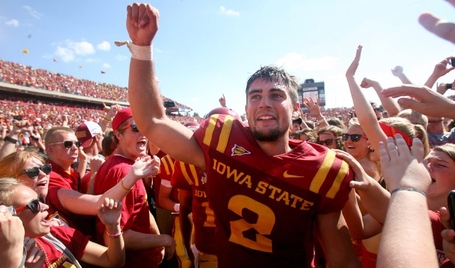 Number 2 on his chest, Number 1 in our hearts (Christopher Gannon / The Des Moines Register)

This week, Paul Rhoads finally put an end to months of speculation and named Steele Jantz the starter for Iowa State's home opener against Tulsa. This is a good thing, because it allows Iowa State to move forward with a single signal caller leading the first team in practice. But honestly, it probably didn't matter who was picked for the opener; both Steele Jantz and Jared Barnett were almost statistically identical last year (Jantz was the 108th best QB in the nation, Barnett ranked 110th). These are pretty terrible rankings, but pretty much expected for a JUCO transfer with one year of college football experience and a redshirt freshman.

Rhoads and new offensive coordinator Courtney Messingham talk a lot about the need for more big plays, but results haven't really shown up in the Rhoads era. In 2011, Iowa State ranked 107th out of 124 teams in yards-per-play. In 2010, this stat was even worse at 114. This isn't going to get it done in the Big XII, which had five teams in the top-30 of yards-per-play last year.

And Jantz has shown to be an electrifying player, at least some of the time. His fourth-quarter heroics against Northern Iowa, Iowa and UConn are well documented, as are his struggles against Texas, Missouri, and Texas A&M. So which Jantz will show up in 2012, the Jantz from the Iowa win or the Jantz from the Missouri debacle? What did Jantz do to influence Paul Rhoads' decision?

In this context, Rhoads' choice makes a lot of sense. For most of Rhoads' career, the offense has been the enemy; the thing to scheme around; the entity to stop. From that perspective, Steele Jantz is kinda terrifying. Defensive coordinators don't know what's they're going to get if a play breaks down with Jantz in the shotgun. Hell, Iowa State's own coaches probably didn't know what they were getting half the time with Jantz in the shotgun last year.

Jared Barnett has proven to be the more predictable choice. He's been running a version of the Cyclone's offense since high school. He doesn't have the arm or speed of Jantz, but he knows the offense. But clearly, just knowing the offense isn't enough this year. The coaches need someone who can win a game on their own.

And Jantz provides that option, or at least hope for that option. Iowa State has talented running backs and a deep offensive line, but the wide receivers have been subpar for years. The recruiting has gotten better, and shifty slot receivers like Jarvis West provide hope for the future; but the Cyclones still have a bunch of possession receivers in starting roles. Iowa State needs a quarterback who can make things happen on his own. They can't pull a Texas Tech and plug a noodly-armed statue in the backfield who throws five yard passes that the receivers turn into 20-yard plays. Yet.

So Rhoads' choice is a bit like a Steele Jantz play: A little risky, with a huge reward if it works and a potentially-crippling blow if it doesn't. Hopefully Jantz has improved the mental errors that made him such a frustrating player to watch last year. If he can cut down the interceptions and make the right reads in the passing and running game, he'll be able to win games for the Cyclones. If he continues to turn the ball over and always give the ball to the running back on the zone read, well... Jared Barnett is waiting right on the sideline. And don't think that losing his starting job hasn't made him a hungrier player. He wants the starting quarterback position back.