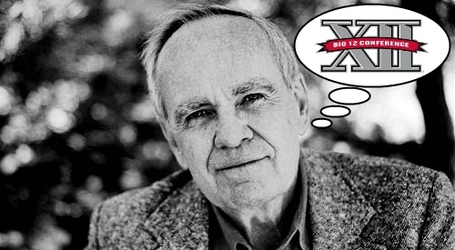 Hello. My name is Cormac McCarthy. I'm a writer of some renown. I'm also a football fan.

I now live in the American southwest in the high chaparral hills of the desert. Because of this, or perhaps in spite of this fact I've adopted the Big XII as my league. It is a good league. Teams engaged in centuries old combat. Spilling blood and viscera across the hardscrabble plains of the Midwest and Texas and Oklahoma territories. Singular men who sling the ball to tall sculpted gods who catch and immediately flee upfield. It is a league after my own heart.

I'm writing this preview to give you a sense of the Big XII this year. Which teams will triumph. Which teams will fall into the mud, trampled by others worthier than them. Left to die in the ditch. Alone and forgotten. Let us look.

1) Oklahoma: A glimpse of Oklahoma from across the field, a company of madmen streaked with crimson and pale gore. And then the offense is immediately upon them in a wild frieze of headlong players rushing with dreadful purpose through the defense, gnashing teeth and helmets winking in the sun. They slash through the ranks with nightmare faces grinning madly at the sky thinking only of one thing. The endzone. If they do not succeed with one play they are immediately back in formation and striving again for their hellish goal. Dust stanches the naked heads of linebackers and cornerbacks lying scalped and broken on the bloodslaked field. The defense is overrun, and the sooners gibber in ancient tongues as they sodomize the dead. Oklahoma will not be denied.

2) West Virginia: He is known as Holgo. He can neither read nor write and already in him broods a taste for mindless violence. All history present in that visage, high forehead and Red Bull-stained teeth. Iowan by birth, traveler by choice. At 27 in Mississippi, he wanders west to the moon desert of West Texas where he learns from the master then he kills his master. Wanders north to Oklahoma and finally east to West Virginia. Why does he wander. Holgo knows. There is always another casino to fall drunkenly from. Always another airplane to jump from. Always something to fill his boundless appetite.

3) Kansas State: The old man is bent forward studying the ground. A secret to be gleaned from the turf. His time with the wildcats has not been easy. Struggle. Work. Victory. Struggle. A betrayal he once believed would be impossible. An exile while a clownish prince claims his throne. Years spent in the wilderness of the plains scrabbling for scraps and water while his republic fell into disrepair with no one to save it or pull the charter from the ashes while the prince fiddled and his palace burned to the ground. A coup. Reascension.

He knows his time is not long now. He uses time wisely, efficiently. His troops are ragged, pulled from wild and unknown places with uniforms of unnamed rank and single color. Junior colleges. The old man looks up. Squints against the gloom that grows darker with each moment.. Pulls his tattered windbreaker closer about his shoulders. Run the qb counter, he says into his headset.

4) Texas: Silver haired and silver tongued, the salesmen grins across the room. He knows that all he surveys is in his possession. His house of cards exists at the beginning of a new century. An invention of his own making. His message broadcast across the world from his leather-trimmed chair. Lights glare upon his face, and the smile expands.

A shadow clouds his mind. A privileged life is all he knows. Where he once made an empire now only edifices remain. All he built is superficial and imperiled. But once he rode on the backs of mighty steers across the plains and hills of Texas towards the sun with gleaming soldiers and horns shining in the dawn where all who crossed their path were consumed by the leaders and trampled underfoot and left in the road with dust drying the blood on their faces and were left looking to the sky thinking why god. Why the longhorns.

5) TCU: Patterson squints down at the map he's holding. The map is faded and creased from years of use, from years of wandering from the southwest to the western territories to the cusa to the mountains. Patterson is tired of the wandering, tired of the road, tired of the cold. He spreads their trajectory across a tree stump. This, he points, this is where we're headed. The men huddle around.

Irving. It's in Texas.

How long till we get there?

Patterson looks up at the men assembled. A horned toad jumps on the stump, fat and spined and naked. Its bulk obliterates the mountains.

6) Oklahoma State: The boy who believes himself to be a man charges forward towards his assailant, arms swinging in all directions. His visor drops from his greasy hair and falls to the turf. He says, I'm going to kill you.

His assailant crouches and swings a bottle towards the cowboy's face. The cowboy is ready, hardened by years spent in the wild without food or water or a team worth believing in. Now, he screams at the roof.

Eleven drop from the rooftop and swarm the assailant. He is immediately overwhelmed and pitches off the narrow field. He cannot withstand the onslaught. Men are coming at him from every direction, running over him with speed he thought impossible. As he lies in the grass, he grasps a chunk of earth between his fingers and watches the cowboy run into the endzone. The ball is spiked. He closes his eyes.

7) Iowa State: The man looked over at his charges. The light outside is just breaking but it's still dark and cold in the hut. Thunderheads as wide as the prairie loom ominous on the horizon and fat raindrops start to spit wet on the windowpane. He breaks the silence. We're going south.

We have to keep moving. We always need to be moving forward. If we stop moving, we die. You wanted to see what the bad guys looked like, right?

They sit there, cowled up in their jerseys. We're still the good guys, right?

And we're carrying the fire?

That's right. We're carrying the fire for the conference.

They sit awhile longer, looking out the window. A cardinal alights on a tree branch.

8) Baylor: The Reverend Briles had been playing to sparse crowds in Waco for years. His existence was meager, bolstered only by the sparkling play of the athlete for the past four seasons. But now the athlete was gone, and the reverend needed a new attraction.

Neighbors, said the reverend, he couldn't stay in this here hell, this hell called Waco. Robert needed to move on, carry some other team on his back. We couldn't ask him to stay here forever, could we? Now we have a fine, upstanding young man here to replace him. Step forward, Nick.

A moan swept through the crowd. A lady sank to her knees.

Let's hang the turd, cried an ugly thug from the galley.

Oh god, cried the reverend and began reading feverishly from his opened bible.

A push to the front as the crowd fell upon him yelling curses at their lord and the reverend was torn apart.

9) Texas Tech: The raiders gaze dully at the ground. A dog barks outside the window but no one looks up at the sound. A man in a bespoke suit implores them from the front of the room. He begs them, threatens them, curses them to stand up and take the field. The raiders do not. A lineman spits at the fly lazily circling his head.

This man is an imposter. He is not their leader. The pirate was run out of town some years before by a scoundrel with a hole in his head where his brains should have lain. A stupid man, caught up in stupid and vainglorious pursuits. The pirate has taken command of another ship in the Pacific Northwest. He cannot help them win games. So they sit while the man in the suit yells.

10) Kansas: The coach is dancing. Towering over his team, his enormous girth huge and pale and hairless, like a monstrous infant. He never sleeps, he says. He says he'll never die. He wants to be a suzerain. A lord who rules even where there are other rulers. His authority countermands local judgments in Kansas.

Whatever exists on his team without his knowledge exists without his consent. He has killed, he will kill again. Jordan Webb. Jake Farley. Chad Kolumber. All fallen to the coach's insatiable appetite. Their freedom was an insult to him. He never sleeps, the coach. He is dancing, dancing. He says that he will never die.