Share All sharing options for: 2012 Game I: Iowa State vs Tulsa Preview

The first preview of the year is the toughest to write. The preview is based almost solely on optimism and any snippets I’ve been lucky to gather throughout training camp and the practices leading up to the first game. It’s even worse to preview the opponent. More so when the starting quarterback for the opponent, who in this case is Cody Green, has actually played in Jack Trice Stadium. For those with short memories, Green was the victorious quarterback on a windy day in Ames when #9 Nebraska came to town in November 2010.

Without further ado, let’s jump into the first preview of the 2012 football season.

Jarvis West had a kickoff return for a touchdown called back, Tom Herman had one foot on the plane to Columbus, and Paul Rhoads started an eight month long quarterback controversy in a 27-13 loss to Rutgers in the New Era Pinstripe Bowl.

Tulsa was held to 272 yards of total offense but still led late until a fake spike by BYU quarterback Riley Nelson led to a touchdown pass with 11 seconds left to power the BYU Cougars over the Golden Hurricane 24-21 in the Bell Helicopter Armed Forces Bowl.

Iowa State vs Tulsa: A History

A fun note for this game: Paul Rhoads and Tulsa head coach Bill Blankenship share a branch in John Cooper’s coaching tree. Blankenship played quarterback at Tulsa under Cooper in the late 70s and Rhoads was a graduate assistant for Cooper at Ohio State in 1991. Cooper, as most of us know, was an assistant for former Cyclone head coach Clay Stapleton in the early 60s and was (sadly) passed over for the head coach position when Iowa State hired Donnie Duncan in 1979.

A Look at Iowa State’s Offense vs Tulsa

Steele Jantz is once again the man at quarterback but with the other ten men on the field the pressure to be outstanding should be lessened. A returning Shontrelle Johnson will give the Cyclones a proven three headed monster in the backfield. With Jantz’s health no longer in question as well this season will be determined strictly by his consistency.

I never felt that Tom Herman was great at showcasing his players’ strengths on a consistent basis and this was readily apparent with some of his play calling strategies throughout the 2011 season. By many accounts Courtney Messingham has taken the offseason to explain the why to the players better than Herman did. If this is truly the case then I expect it to show up in the play calling on Saturday.

Tulsa ranked 33rd in the country in rush defense last year, but ranked an atrocious 117th in pass defense in the pass happy Conference USA. Conventional wisdom says pass, right? Wrong. Tulsa’s pass efficiency defense ranked 57th nationally due to the bevy of sacks, interceptions, and low opponent completion percentage. From what I’ve watched on film this Tulsa defense is a slightly less talented version of the Rutgers defense we saw in December. They’re small, aggressive, and fast. Three of their defensive linemen return along with 6’4" hybrid defender Dexter McCoil, who is tied for first in career interceptions for Tulsa with 13 in only 37 career games. Needless to say, this is not a Big XII caliber defense but it’s not one to sleep on either.

With a smaller defensive line (266.4 pounds on average) the Cyclones will look to establish the running game early with their one proven commodity on offense: the running backs. It will be interesting to see how a line that returns six players with over 150 snaps in 2011 will gel without All-American tackle Kelechi Osemele and guard Hayworth Hicks, but as a unit this line should have less trouble establishing the run than they did against UNI a year ago.

From the very first whistle of the 2012 season we are going to see if the new philosophy of run first and take advantage of the defense will actually come to fruition on the field. 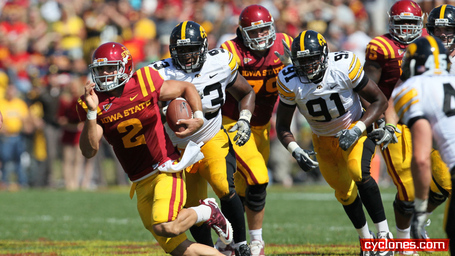 A Look at Iowa State’s Defense vs Tulsa

A lot of people forget that while Cody Green was only 7 of 12 when he quarterbacked Nebraska to a win in Jack Trice Stadium in 2010 that he was not actually all that terrible of a quarterback. His pocket presence was solid and he showed just enough running ability to keep the defense honest. That running ability should be less of an issue now that he has clocked in at 247 pounds but he has a strong arm that is capable of delivering the ball in this Tulsa offense.

Tulsa returns the 26th ranked rushing attack in the country to pair with the 44th ranked passing offense that was previously led by record setting quarterback G.J. Kinne. Their offense is not nearly as misdirection based as it was under Gus Malzahn but there are still plenty of moving parts designed to put pressure on a defense horizontally and vertically. Although Green looks to be more than capable of physically running the offense it’s a wonder how he’ll fare with talent lower than what he had at Nebraska. Will he succeed because of the scheme or because of the returning receivers and running backs? Or better yet, will he become another victim of AK47 and a healthy Jake Knott?

Tulsa’s offense will stress a good defense and a lot of this comes through using talented H-Back Willie Carter who is one of the most complete players Iowa State will see this season. Carter is the lifeblood of this offense and in man-to-man situations will likely be matched up with Jake Knott. Carter and Knott were both two stars coming out of high school so it will be interesting to see who gains the upper hand.

The key to stopping this will be the key to nearly every college football game ever played: how good is the defensive line? Rhoads has said that he plans on playing 10, possibly 12, on the line during a game so fatigue will not be an issue. The persistent question is going to be around whether or not Roosevelt Maggitt and Willie Scott are better than Patrick Neal and Jake Lattimer. If they can be then this game will set up favorably for Iowa State.

I expect Tulsa to try and stress a defensive line with only one returning starter early and set up the play action pass to take advantage of a short Jeremy Reeves and an inexperienced Jansen Watson. Tulsa’s starting receivers all clock in at 6’2" or above, and if last year is any indication, they’re going to want to throw the ball deep. Based on how are secondary has performed in the past against this style of offense we are going to either see another Texas Tech style beat down or another 300 yard passing game for an opposing quarterback. 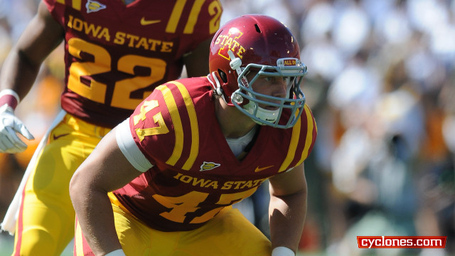 Kirby Van Der Kamp returns for his 3rd year as Iowa State’s punter and both return teams are deep with Josh Lenz, Jarvis West, Aaron Horne, and Shontrelle Johnson all with the potential to be handling the ball on punts and kickoffs.

The two biggest uncertainties will be how the special teams will handle the promotion of Messingham to offensive coordinator (and thus removing his lead special teams coach designation) and whether or not junior walk-on Edwin Arceo can handle the kicking duties well enough to redshirt freshman kicker Cole Netten. Rhoads has already said Arceo will handle kickoff duties on Saturday and my money is him trotting out for the first field goal or extra point attempt. If Arceo struggles then Netten will be waiting in the wings. The actual units themselves should be strong as always with Rhoads’ emphasis on a strong special teams unit.

Reason for Impromptu Dumpster Burning: If Iowa State wins this by three touchdowns we’ll have reason to be optimistic/over confident and light things on fire!

Rhoads was asked on Monday if he would prefer to be facing an opponent that was as close to a guaranteed win as possible and naturally his answer was in the affirmative. Every staff wants to start the season 1-0 but some seasons are more difficult than others. This season is one of those.

Despite their new quarterback, Tulsa returns nearly everyone important on offense and three starters on the defensive line. This team is experienced and one that gained a lot of that experience by losing to four (at the time) Top 10 teams in 2011. They will not walk into Jack Trice Stadium expecting to lose and if they watched tape of last year’s UNI game they’ll believe they can pull the upset.

On the flip side, you have an Iowa State team with a lot of known unknowns. We know what Steele Jantz can do when he’s great, but also what he does when he’s terrible. Which side will show up? There are six offensive linemen with a load of experience but how will they fare when they get the majority of snaps in a game? Guys like Jansen Watson have been in the program for four years so how will he fare when he sees his first extended playing time at a skill position? Rhoads has called this his best team yet and a very experienced one at that. The experience of this squad is going to go up directly against an experienced Tulsa squad. It’s definitely going to be a test to start the season and if any fan is expecting a blowout they better temper their expectations at the front gate.

Cyclones sputter early and Tulsa quiets the crowd, but depth wins the day in the 4th quarter.

PS - As always, leave your predictions in the comments.

PPS - Be sure to check back tomorrow at Noon for our Weekly Big XII Preview.