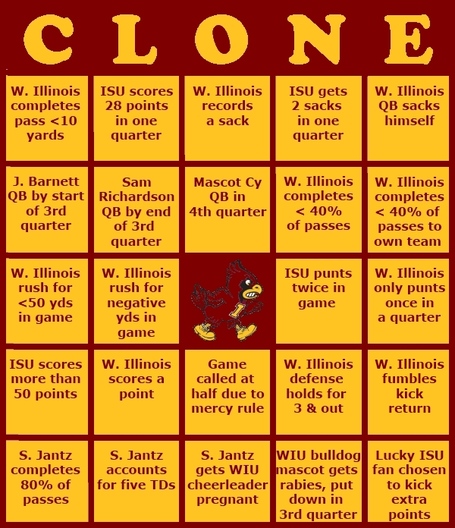 Use this card wisely. Or don't. It's really up to you.

With tomorrow's game against FCS whipping boy Western Illinois looking to be a blowout, Iowa State fans will need something to occupy their time during the game. Of course there are always the popular pastimes of sunburn and getting blackout drunk at a tailgate, but just in case those aren't enough; WRNL is here for you. The fan. Hey, it might get boring watching Iowa State score its third touchdown in a quarter!

Because it's not like Iowa State fans have a lot of experience with lopsided wins. Lopsided losses, sure. Cyclone fans know how to deal with those (see the aforementioned pastime of being blackout drunk). But Iowa State hasn't really blown a team out since... well, Texas Tech last year probably counts. But before that, you have to go all the way back to 2002 when the Cyclones destroyed Tennessee Tech 58-6. Part of this is due to Iowa State generally playing to their level of competition. It also has a lot to do with Iowa State having less than stellar teams during the last decade.

But tomorrow should be different. Iowa State hosts an FCS team that won two games last year and struggled to beat a team from the Pioneer league in week one and a Division II team in week two. This should (fingers crossed) be an easy game. So use the bingo Clone Card above to have a little fun during the game. Try to fill in a full row! Maybe not the bottom row though, that one might be a bit tricky.