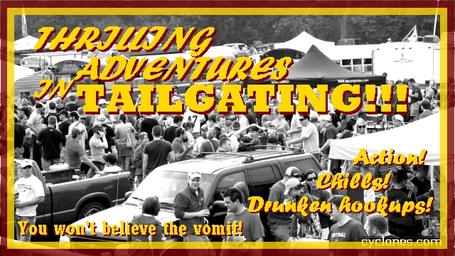 Tailgating at Iowa State: A tradition unlike any other. We've all participated; hell, we've all probably been awarded trophies for excellence in the art of pre-game drinking. But due to the nature of the pastime, memories are often vague and hazy. There hasn't been a record of the feats accomplished or the glories witnessed at an Iowa State tailgate. Until now.

In which Godwin's law is invoked, and the police are unimpressed

It's 10AM of the Illinois State vs. ISU game for either a late afternoon kick or early evening kick, I don't really remember. More on that later. My housemates (all 6 of us) and I all get up and decide to have some hair of the dog to kill off our hangovers. About two beers in (each of us had bought a 30 pack the night before for the day), someone comes up with the idea of playing Bocce ball and horseshoes in our backyard until it was closer to kickoff to walk the tailgates and drink copiously until it was time to enter the gates of Jack Trice.

We end up playing yard games until 2PM, then decide to head to our other buddies' apartments in Buchanan Hall to watch the afternoon games and drink more. We then loaded up a backpack with 60 beers between the 5 of us that had tickets (I honestly have no idea what we thought we were going to do with the backpack when we decided to head into the game).

We start walking to the student lots, drinking beers along the way, and then we see the kybos and decide this would be a good time to take a piss and shotgun a beer or two while we were in there. We each grab two beers, and go into the kybos two at a time to shotgun beers out of sight of the cops. It was a piss and drink race we had going on for god only knows what reason.

Once we exit, we decide that our 19 year old selves look 21 and decide to walk around with open containers all of the time. While walking through the student lots, a campus security cop stops one of my buddies and me. Asks for ID and our ages as we were stumbling all over the place after having been drinking for 6+ hours and starting with hangovers/still being drunk from the night before. We were promptly told we were going to be arrested, to which I decided it would be intelligent to demand that I'm allowed to finish my beer to the cop.

He was none too pleased that I chugged the last half of my beer right in front of his face, so we got the handcuff treatment and released to the Story County cops. My buddy was able to get in the paddy wagon at the stadium to take him over to Nevada once we got there. I, however, had to sit in a chair and wait until the next one filled up.

At this time, one of my housemates found me in the cop tent just south of the stadium, and started to berate the cops that were arresting me. Obscenities were shouted, but my favorite quote came in the form of him screaming at the top of his lungs "This is so much bullshit! You fucking pigs are awful human beings! I'll take him home if you let him go!" Their response? "We're just doing our jobs, sir. Calm down." That is when he upped the ante on them "That's fucking exactly what was said when the fucking Nazis were on the stand of the Nuremberg Trials! Bullshit! You're just like the fucking Third Reich, you assholes!"

At this point, I really had to take a piss, as I had been sitting in this chair for nearly a half-hour. Before they would let me go, they decided to give me a breathalyzer test. I blew a .36. Then there was a discussion right in front of me about taking me to the hospital to have my stomach pumped, and my response was merely "Fuck that. I'm not getting pumped. I've been drunker (sic) than this before. Fuck you guys. Let me go take a piss."

When I was denied this request, I decided to take the matter into my own hands even though I was still handcuffed with my hands behind my back. To this day, I have no idea how I thought I was going to accomplish this feat sans hands, but that wasn't relevant at the time. I walked about 4 feet and face planted in the grass. The cops then laughed and watched me struggle to get up for another 20 minutes. Fuck those guys.

I also met some hilarious people in the drunk tank that night. Including two guys who got arrested for public intox as well after they started throwing full beer cans at a cop car in their apartment complex's parking lot from their balcony after the game. When I blew in the morning before seeing the judge, I blew a .09.

Sometimes, you can just tell when you’re going to have a great day. That was exactly how I felt on the morning of Friday, November 18th, 2011. It might have been from sleeping in and not going to work, but it was mostly from knowing that I was going to get the pleasure of tailgating later that day. Tailgating for a game where Iowa State was a 4-touchdown underdog to the #2 team in the BCS.

Despite that, I woke up that day rejuvenated. Fresh from the glow of the previous nights Busch Light, I was not hung-over. And I felt the best way to celebrate this accomplishment was with a little television and amazingly; FX was broadcasting Rocky and Miracle back-to-back. It was a sign. A sign that had I had felt all week that ISU was going to do something special on this day.

After having a few beers and watching Rocky yell "ADRIAN!", it was time to head to Ames. Upon arrival, we headed straight to the tailgating lots. We found our friends in line to enter the student lots and politely told the parking Nazi "FUCK YOU" as we took up multiple parking spots.

Grills were lit, beer bong tables were set up, and our 15 foot tall flagpole was proudly displaying our tailgate mascot; a stuffed woodchuck in a ISU cheerleader outfit. The heavy drinking commenced and we started immediately into a large game of flip cup. The music was loud; the beer was cold, and the November weather surprisingly warm. I was soon drunk. So drunk that at one point I participated in a 5-person mosh pit to Rhianna’s, We Found Love.

I puke for some time, but continue drinking and soon it is time to go into the game. Iowa State vs. Oklahoma State. The feeling of the pending upset is quickly scolded as OSU gets a 24-7 point lead and we considered returning to the lots for more drinks, but ISU recovered an onside kick and the comeback was on. By overtime, I am mostly sober, but drunk on the atmosphere inside the stadium. Before long, Jeff Woody rushes into the end zone, we rush onto the field, and in typical ISU fashion, we celebrated by lighting a dumpster on fire. It was a glorious day.