Welcome to this week's episode, kids.

Everything in the universe is in motion. Whether it's an asteroid in deep space or a quarterback running over crimson-clad linebackers, we are all moving in some fashion and being acted upon by outside forces.

In fact, the football field is often a large complex system of forces all working in different directions. It can seem like a bit much at times, so to help us break it down to basics we've built the most advanced football research facility on Earth! Behold, mortals, my Master Plan!

Today, we will be using this state of the art, fully armed and functional football reaction vessel to study Newton's Laws of Motion, with the help of our good friend, Landry Jones.

Now the first Newtonian Law of Motion (which is just a fancy way of saying "Why stuff moves like it does") says that "An object in motion stays in motion." Or, if an object is not moving, it will continue to not move. Landry shall demonstrate for us: 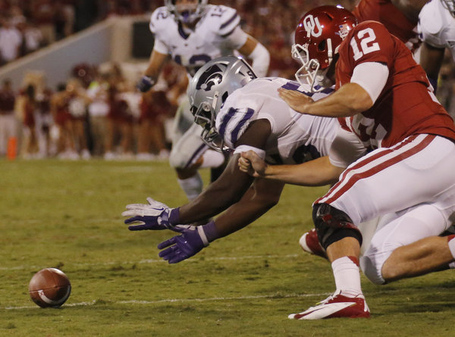 Thanks to Landry, we can see both examples in this photo. Adam Davis, clearly in motion on a path towards the ball, will remain in motion. The ball, which has come to rest, will remain at rest until secured by the Wildcat lineman.

Now as we all know, objects and people don't travel in a straight line forever. This is because all objects on Planet Earth, we are being pulled on by an outside force known as gravity. This brings us to Newton's second law of motion: Movement (acceleration) is caused by outside forces acting on an object.

We can see this a couple of ways, but the easiest example is with gravity. Landry will help us demonstrate once again:

Once Landry releases the ball, two forces are acting upon it. The first, gravity, is much stronger, so the football moves towards the ground quickly. The second force applied by Landry causes the forward motion of the ball, which I guess we're calling a "pass" now because apparently "pass" means "a snap that bounces off of hands carved from granite."

Speaking of which, this gives us a good chance to examine Newton's third law: "For every force, there is an equal and opposite force." In other words, every time you push on something, that something pushes back on you with equal force, (unlike most the Oklahoma offensive line).

Landry will now demonstrate this critical law of motion:

As the Iowa safety slams into Landry, knocking him unconscious, the ragdoll that once was an Oklahoma quarterback is exerting and equal force back on the Iowa lineman, slowing his forward motion until gravity brings both bodies to rest.