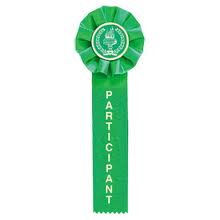 Iowa City, IA - The annual clash between Iowa State and iowa is still days away, but according to sources out of Iowa City, the iowa athletics department may already be conceding victory.

A source who wished to remain anonymous has informed the Coralville Times and Coupon Saver that iowa athletics director Gary Barta has placed an order for an oversized "Participant" ribbon to give to the team after what he expects to be a second consecutive loss to the Cyclones.

The Iowa Corn Cy-Hawk trophy is annually presented to the winner of the game, but after iowa's dismal offensive performance against Northern Illinois in their opener, the source indicated that Barta feels there is little hope for iowa against its in-state rival.

Barta declined to comment on the matter, as did iowa coach Kirk Ferentz. The hawkeyes have several trophy games with other universites, including Minnesota and Wisconsin in addition to Iowa State, but currently hold none of the trophies after a series of losses to the three schools.

WRNL reached out to Rick Sullivan, owner of Little Champions Trophies and Awards in Iowa City, but Sullivan would not confirm the report. Sullivan only stated that he had recently received a "large order" from the iowa football program, but refused to provide further details about what the order was for.