So let's get to some half-assed and wordy game analysis shall we?

Steele Jantz was looking his best since last fall’s game against iowa while going 32 of 45 for 281 yards and two touchdowns while adding another on the ground in a 38-23 victory over Tulsa.

James Vandenberg was looking… something… after going 21 of 33 for 129 yards and Damon Bullock’s late 23-yard touchdown run drove iowa past Northern Illinois 18-17.

Iowa State vs iowa: A History

iowa owns the all-time series record 37-17, but has been unremarkable in the Kirk Fertentz era, going 6-7. The only team Ferentz has lost to more in his tenure has been the Ohio State Buckeyes (8). I knew that stat before reading this column by Brent Blum, but had no better way to make sure his column got linked.

A Look at Iowa State’s Offense vs iowa

Last week I had major concerns about whether or not Steele Jantz would turn out as advertised and if the new starters on the offensive line would gel enough to overpower Tulsa. Turns out those concerns were answered… to a point. Jantz had an otherwise above average game, and other than his touchdown pass to Josh Lenz, the 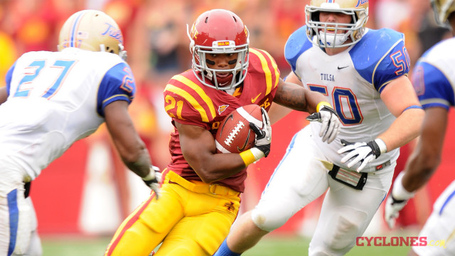 highlight was the fact he had no real lowlights. Even Jantz’s interception was forgivable given its height and the fact tight end Kurt Hammerschmidt managed to get his hands on it. Jantz did have a few clunkers for throws but unless you’re top NFL talent that usually happens in most games. What surprised and pleased me the most was a 3rd down play in the 4th quarter when Jantz was flushed right, looked across the field, decided against the late throw over the middle, and dumped off to Ricky Howard for a short gain. While this did not result in a 1st down it did allow punter Kirby Van Der Kamp to pin Tulsa on their 13 and later that drive Cody Green threw the game sealing interception to Deon Broomfield.

That series of plays highlighted exactly what Paul Rhoads has preached since taking over this program and that is a complete team effort: offense, defense, and special teams. Each unit has to set the game up for the unit that takes the field after them and there was no better example than that stretch in the 4th quarter. To bring it full circle one only needs to look to the very next play after Broomfield’s return: a 5-yard touchdown run by Shontrelle Johnson for his first touchdown since 2010. ALL of this must be on display in Kinnick Stadium on Saturday for the Cyclones to emerge victorious in Iowa City for the first time since Seneca Wallace did this.

Normally I would regal you with stats at this point in the preview to backup my assertions on what I believe the gameplan will be, but there is no need for it this week. Iowa State knows what they need to do to win this game: hold the ball, run the ball, and set up Jantz for easy completions, in that order. As we saw last year, iowa’s defensive line is not made up of the NFL talent it was in the past and Iowa State’ s offensive line is continuing to develop depth and experience. To argue that this matchup in the trenches isn’t fundamental to how this game will turn out is foolish. Jantz will have to be just as composed as he was last week but his composure will take a bad hit if the run game does not click. iowa surrendered 147 yards on the ground last week but 73 of those came on a quarterback draw by Jordan Lynch. It’s tantamount that Iowa State at least match that total to have a shot in Iowa City.

A Look at Iowa State’s Defense vs iowa

Cyentist did all the legwork on this one and a detailed breakdown can be found here.

In all seriousness, I am concerned about this matchup more than I thought I would be. A lot of commentary has been given to how bad Iowa’s offense looked against Northern Illinois last week but all I can remind you of is how bad Iowa State’s looked against UNI’s to start 2011. We all know how the next weekend in Ames turned out. 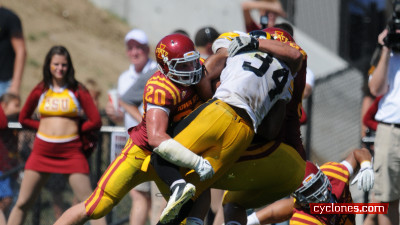 Somewhere deep in my head I feel that Greg Davis knows something we don’t and we’ll see it Saturday. iowa doesn’t have the depth in the back field to run it as much as Iowa State does but what they do have is an offensive line that still excels at run blocking and blowing guys off the ball. All it takes is a few game breaking runs to turn this game the other way and I think iowa is going to try to do just that.

Unfortunately what plays so well into this whole scheme is the fact that Vandenberg plays better in Kinnick vs on the road, so Iowa State’s ability to stack the box and stop the run will be lessened by Vandenberg’s apparent super human status in the confines of Kinnick.

Despite all of that the iowa coaching staff has to be concerned about the six sacks given up last weekend, which amounted to 25% of the total Northern Illinois had all of last season. Iowa State showed last week that a 12 man (yes, 12) rotation on the defensive line plays dividends late in games and on passing downs, so seeing how Greg Davis mitigates that will be fun to watch. iowa’s line is built to run, and not sustain pass blocks for a significant amount of plays, so slowing down the running game and forcing the hawkeyes into 3rd and long will be key to the Cyclones’ defensive success.

Kirby Van Der Kamp won Big XII Special Teams Player of the Week honors for his incredible effort last week landing five of his nine punts inside the 20 yard line and still averaging 43 yards per punt. Edwin Arceo was a nice surprise as he hit on all five of his extra points and booted in a 30-yard field goal to end the 1st half.

The one area to be concerned about heading into this weekend will be the kick coverage unit. The long returns last weekend I felt were due to two things: Arceo’s length on his kickoffs and the personnel on the field at the time. Why Quenton Bundrage is on kick coverage is beyond me. His speed is probably the best reason, but I’m not sure his block shedding and tackling are worth the risk to have him out there. Arceo clearly kicked better with the wind at his back but you can rest assured the staff spent a lot of time this week trying to solve this problem before facing an iowa special teams unit that isn’t world beaters but solid enough to create great field position.

Reason for Impromptu Dumpster Burning (0-1): The Cyclones come out and match the performance of the Darren Davis led 27-9 thrashing in 1998.

We can spend all week ringing our hands over what the first week of games meant to each team but as we learned last year it’s not indicative of future results. Just because Vandenberg threw for only 129 yards on 33 attempts doesn’t mean he’ll have the same results this week. Same goes for Jantz.

What is guaranteed is a good game by both sides. I thought last year could possibly be the crossroads of this rivalry where it swings back in the Cyclones’ favor for the next few years but at this point it’s too even to tell. It took a masterful performance from Jantz last year and some big 3rd and 4th down plays late in the game for the Cyclones to even have the chance to win in overtime so it’s tough to believe that things will be vastly different in Iowa City.

My concern with this game is not the gameplans (they’re exactly the same: run and stop the run) but rather how each team adapts to the other and how each quarterback performs under pressure. Jantz has only started in three road games in his career: UConn, Baylor, and Missouri, and in each one he made critical mistakes that put the rest of the team in a hole. As much as our fan base does not like to admit it, Kinnick Stadium is a much tougher place to win in than the three stadiums mentioned above. Couple that with Vandenberg’s ability to play well at home and I think the scale tips the hawkeyes' way in 2012.

PS – Leave your predictions/flame away in the comments