Thank You For Your Support, Hawkeyes

Share All sharing options for: Thank You For Your Support, Hawkeyes 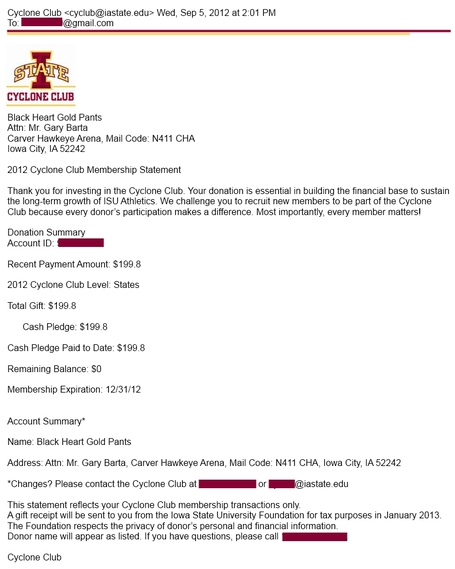 Well, the Cy-Hawk game is almost upon us, and that means hate/pity week is winding down. It's been a good run this year, with plenty of give-and-take between the fanbases, lots of gentle ribbing, and a few slightly off-color comments about what each fanbase will do to the opposing fanbase's mothers/sisters/grandmothers.

But it's all in good fun, and WRNL has been inundated with Hawkeye visitors during the past week. And due to these new fans, WRNL has seen a major spike in site traffic. SB Nation is so impressed with boost in traffic, they've given WRNL an early Christmas bonus. And in the spirit of the season, we didn't want to spend it on ourselves. Instead, we've given back to the community.

Specifically, the community of the Iowa State athletic department. A modest donation has been made to the Cyclone Club in the name of Black Heart Gold Pants, the Hawkeyes' excellent fan site. You can see the receipt at the top of this page. We felt the amount $199.8 holds a special significance for Iowa and Iowa State fans alike.

Again, thank you to all the Iowa fans who visited WRNL this week to tell us in painstaking detail just how much Iowa State sucks. Obviously we can't recognize every one of you, but the thank you letter and Cyclone Club materials will be sent directly to Gary Barta to let him know how much we appreciate your help. Your contributions to this site have gone directly to fund Iowa State's athletic department. Now every time you see Iowa State on television (or even in Kinnick this Saturday!), you'll have the pride of knowing that you helped donate financially to Iowa State's future success.

As Johnny Orr and Jim Walden would say, we sure do thank you for your support.