The Amazing Adventures of Captain Curt and the Concealment Clan

Share All sharing options for: The Amazing Adventures of Captain Curt and the Concealment Clan 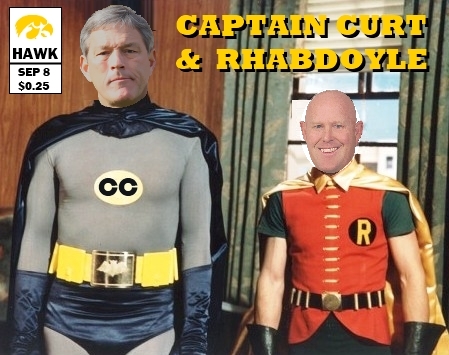 By day, Kirk Ferentz is the mild-mannered coach of the Iowa Hawkeyes. But when scandal strikes, he transforms into... CAPTAIN CURT: Superhuman condescender and defender of the Hawkeye Way.

(When we last left our hero, Captain Curt was cleaning up a nasty bit of business involving Satterfield and Everson, the Rohypnol Twins. Today, it looks like Captain Curt's faithful sidekick, RhabDoyle has gotten himself into a little pickle...)

RhabDoyle: Jumpin' jillikers, Captain Curt, how are we gonna get outta this scrape? I landed these kids in the hospital! They're literally peeing out their muscles! PressMan's gonna be all over this one!

RhabDoyle: His nefarious plot to discover the truth and dig up answers never stops! What're we gonna do?

Captain Curt: No fears, my little friend. I think I know just the way to handle this situation...

***Captain Curt retreats to the Fortress of Solitude, does nothing for one week***

RhabDoyle: Golly Captain, your plan seems to be working perfectly! No sign of that awful PressMan anywhere!

Captain Curt: Yes, my young ward; PressMan and his legion of Heinous Hacks will stop at nothing to get a good story. They have a way of turning up at the most inopportune moments. But we'll be safe here...

But wait, what's that?! My stringer-sense is tingling!

RhabDoyle: Captain! Look out the window! PressMan and his forces are assembling outside the walls of Kinnick as we speak! There must be a hundred of 'em out there! 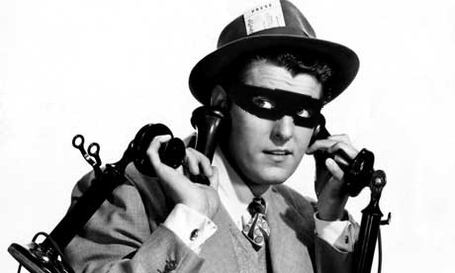 PressMan: We have you now, Captain! Tell me, what did you know about the hospitalized players, and when did you know it?!

RhabDoyle: Curses, Captain! The Hacks' treachery knows no bounds! They're asking you... questions!

Captain Curt quickly draws the cape tight around RhabDoyle and himself. PressMan is undaunted.

PressMan: Ha, foolish Captain! You know that your precious cape has no effect on me! I have a lead, and I'm going to follow it! Now why did you allow football players, including your son, to stay in subsidized housing meant for the poor when the players were on scholarship?!

RhabDoyle: It's not working! We're done for now!

Captain Curt: Not yet, young friend. I still have a few tricks up my sleeve...

Thinking quickly, Captain Curt uses his powers of concentration to dial up his... Glare of Ice 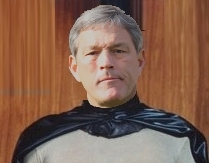 PressMan: Captain, what disciplinary practices did you enforce when 11 players were arrested in seven months?

PressMan: Captain, what can you tell us about DJK's drug house? Did the other players know?!

PressMan: Captain, what do you know about Room N207?!

RhabDoyle: Captain, it's not working! You need to try something stronger! You have to use your words!

Captain Curt: I swore this day would never come... But there's no other way.

Summoning all his powers of condescension, Captain Curt addresses the media

Captain Curt: Oh, you guys are real smart, huh? I'll bet some of you managed to graduate from DeVry University's journalism school in less than a decade. Big accomplishment.

Look, you all sit there and think you know what's going on with the football program because you have a piece of paper from a school. But I don't need to answer your questions. I can be the biggest dick in the world, and you'll eat it up. Because as far as you're concerned, the Hawkeyes are the only game in town. Sure, you'll toss a little coverage Iowa State's way once and awhile, but it's mostly because you don't want to look like partisan chumps.

PressMan: That's just not true! Why just today I was speaking to a source...

Captain Curt: Today? Boy, you guys have great sources. I passed gas out there about an hour into practice. Did you guys catch that on mic? I'll see if I can muster one up for you right now.*

PressMan: Obviously we don't want you to fart on us, we just want to to know about DeAndre Johnson's troubles with the law!

Captain Curt: Pffft. What was he cited for? When you deal with as many arrests as I have, you learn to let the little things slide. A disorderly house - It's not going to rock the Richter scale, but there will be consequences. He didn't sneeze too, did he?**

Captain Curt: See, that's the thing. You all love me. Your journalistic integrity forces you to ask these questions, but deep down, you just want to sit in the press box and watch some Hawkeye football.

Why do you turn away from me? Why do you continue to ask questions? Simply accept me for who I am, look the other way, and worship me as the god that I think I am! Become my unquestioning mouthpiece! Join me, and together we could rule the universe!

PressMan: No... I'm nothing like you! I have integrity! I'm a member... A member of the fourth estate. Hacks, help me!

Captain Curt: Good... Everyone does eventually. Well, RhabDoyle, it was a tough fight, but it looks like the Hawkeye way has won the day yet again! Here PressMan, take this jersey. You can wear it in the press box during Iowa's next away game.***

PressMan: Thanks Cap! Say, you think I could get an autograph for my girlfriend Jeanette? She's awful sweet on you.****

Captain Curt: Ha ha! Anything for a fan...

**** Ha, can you believe this happened? Ed Littler still has his job, too!