Another year in his life cycle nearly complete, the Rhoads Grizzly contemplates hibernation and the loss of several members of his pack.

After another successful season in the wild, the Rhoads Grizzly is at a crossroads. While the past year has seen this majestic creature triumph over many of nature's hardships, the winter approaches. With the cold setting in, the Rhoads Grizzly must gather his group, replenish his pack and prepare for hibernation.

But all is not well this year. Particularly concerning for the Rhoads Grizzly is his tribe's thinning ranks. After traveling to Tennessee in search of a particularly large kill, one that would feed his pack throughout the long winter months, the Rhoads Grizzly was forced out of the area by a freak, season-defying hurricane. Leaving the Memphis woods empty-handed, the Rhoads Grizzly was instead required to forage for food on the trip back to his Iowa home. These meager scraps have not been enough to sustain the 80+ members of the pack, and there has been some disunity and splintering of the group dynamic.

Naturalists who have been tracking the Rhoads Grizzly for the past four years have documented the movements of the members of his pack. In the past week, six cubs left the group, either setting off on their own after traveling with Rhoads for several years or joining another pack before even entering the Rhoads Grizzly's tribe. The natural trend for younger bears is to head south for the winter, as we see with the castaways from this pack:

Additionally, it appears that another beta male, nicknamed Wellsie-the-Pooh, left Iowa State in the past few weeks to travel to reunite with family members in Utah. 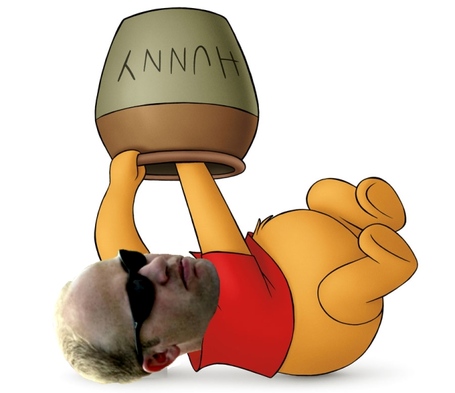 No one knows what drives bears like Wellsie to travel hundreds of miles to reconnect with family, but researchers familiar with ursine behavior believe that the Rhoads Grizzly may have been unsatisfied with Wellsie's contributions to the pack and forced him out of the group.

With only three weeks until the Rhoads Grizzly will need to hibernate for the winter, the older bear will need to do some quick hunting to replenish his pack before next year. The Rhoads Grizzly's tribe currently includes 61 cubs, with 22 set to join the group next fall. This leaves at least two spots in the pack open, with more defections possibly coming in the next few weeks. As always, nature is a ferocious and unforgiving place for the Rhoads Grizzly, but the noble creature soldiers on stoically.