Share All sharing options for: This Year's Team Absolutely Can't Half-Ass It

The answer to this week's question, "Can this year's basketball team coast through certain games?" appears to be a resounding no. Fuck no they can't.

An unfocused, sloppy, poor-shooting, poor-rebounding team walked into Lubbock, Texas last night and thought they could beat the Red Raiders on pure talent alone They absolutely couldn't, and ended up losing 51-56. On a weird Wednesday night that saw top-ranked Duke lose to Miami by 27 points, 9th ranked Butler lose to La Salle, 12th ranked Minnesota lose to Northwestern and 17th ranked Creighton lose to mediocre Drake; Iowa State couldn't hang on against the second-worst team in the Big 12.

The most concerning thing is that Texas Tech didn't have to play especially well to beat the Cyclones. For the most part they played worse than the normally do. Texas Tech averages 35.2 rebounds a game, they grabbed 34. Tech averages 69.1 points a game, they scored 56. Tech averages 11.2 assists per game, they got 8. Tech shoots at a 43.0% field goal average, they shot 39..2% tonight. So both teams played like garbage, the Red Raiders were just a slightly fresher, more aromatic type of garbage.

So what does this mean for the rest of Iowa State's season? Too early to tell, but it's not good. This could either be the gutcheck the team needs going forward for the rest of the year, or it could be a portend of things to come.
The good news: Iowa State likely won't have a worse shooting or rebounding night this year. If shaken off as a fluke, an aberration, this team can still make noise in the Big 12.
The bad news: Iowa State will probably not contend for the Big 12 title this year. It was a long shot anyway, but at this point in the season it was still possible. Win this game, and Iowa State is 4-1; tied with Baylor, Kansas State and Oklahoma for second place in conference. With this loss, they slip back to 3-2 and a distant third.
The worst news: This is one of the first times a Fred Hoiberg team has lost to a team they should've beaten. Iowa State has more talent, more experience and more to play for than the Red Raiders. You can argue that the Drake loss last year is an equally bad loss, but that was early in the season and it was in non-conference play. This Texas Tech loss counts. Conference losses hurt more, and it's a loss that absolutely shouldn't have happened.
And now, the divided Iowa State fan's psyche at the moment.
THE RATIONAL SIDE OF THE IOWA STATE BRAIN 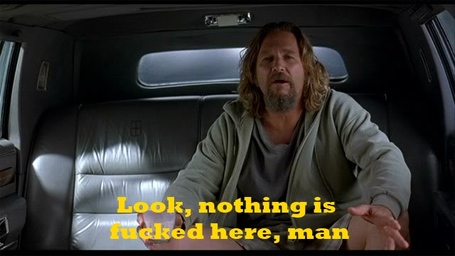 THE EMOTIONAL SIDE OF THE IOWA STATE BRAIN 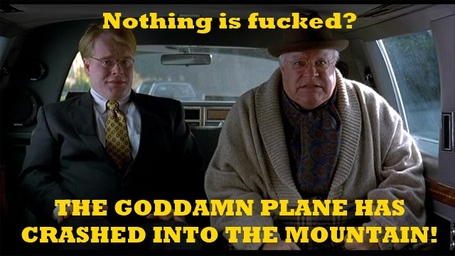 So... Deep breaths, fans. This loss absolutely sucked. It was deflating for fan expectations, and for Iowa State's postseason hopes. It was the Cyclones first bad loss of the year, and arguably the worst loss of Fred Hoiberg's tenure as head coach. It's insanely frustrating to see their favorite team put on such a poor performance.

But the Cyclones head back to the friendly confines of Hilton Coliseum this Saturday and take on the Kansas State Wildcats. Win that game, and Iowa State is back on track.