Welcome to WRNL's abbreviated Big 12 basketball preview series. Instead of spending hours upon hours, pouring over numbers and complex statistics, we're condensing these team previews into easy-to-read, quick-hitter pieces leading up to the season's opening tip. The way I figure, I'm going to be just as wrong no matter how much research I do, so why bother, right?

Now that I've shredded any credibility that I possibly could have had, let me tell you about the worst basketball team in the Big 12, the Texas Christian University Horned Frogs.

Year one in the Big 12 did not go well for the Frogs, but their last place finish was both bizarre and oddly optimistic. From an opposing fan's perspective, matching up against TCU just didn't seem right. While their football program deserved to play in the conference, the basketball scene in Ft. Worth hasn't really been a scene at all for quite some time. It was an adjustment to get used to watching games being played in Daniel-Meyer Coliseum, the smallest venue in the league. I'm sure that feeling of unfamiliarity will disappear over time, but at least in TCU's inaugural season, it just felt different.

Regardless, as frustrating as TCU's first Big 12 season was for coach Trent Johnson and the program as a whole, there were wins over Kansas and Oklahoma that the Horned Frogs can point to as building blocks for the future.

If nobody sees you finish in last place, did it really happen?

Who's Worth Knowing About

Unfortunately for TCU, I just don't see anyone with all-conference potential. Junior guard Kyan Anderson is the closest thing the Frogs have to a star. He's a nice player and played well in spurts as a sophomore, but has to become a much better shooter (40.5% FG last year) if he's going to join the league's best guards. Devonta Abron could have been a breakout player in the post, but tore his Achilles in August and will miss this season. And while we're talking about injuries, this team has been effing cursed. Fellow big man, Aaron Durley, tore his ACL in August and is out for the year and Amric Fields, has been continually plagued by injuries over the last year and his status could be in jeopardy as well.

Say Something Nice About TCU

TCU actually is bringing in some talent. The well-traveled Trey Ziegler, formerly of Central Michigan and Pitt, transferred to TCU and will have to sit out this season, but should pair nicely with Kyan Anderson in '14-'15. TCU also brought in a top 50 recruiting class (247 Sports) that includes consensus 4-star Karviar Shepherd. The 6'10" Dallas native's eligibility was initially in question, but was cleared by the NCAA in late July and could be just the guy TCU needs to build around.

And Now An Uncalled For Cheap Shot

Back in April, TCU announced plans to renovate Daniel-Meyer Coliseum to the tune of a $45 million face lift. The upgrades are desperately needed for what is easily the worst basketball venue in the conference (though the Ferrell Center isn't far behind). One has to wonder though if this is a wise investment on TCU's part. After all, TCU spent all that money upgrading their football stadium, a sport that they actually care about mind you, and now this happens: 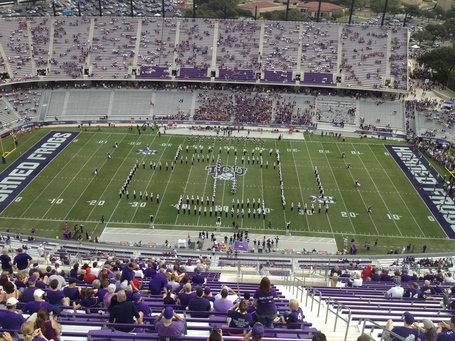 Iowa State swept the Frogs last year, winning by 13 in Ft. Worth and 34 in Ames. Expect more of the same this year.

Why TCU Will Finish Last...Again

I really didn't want to pick you last, TCU. I swear I didn't. I want to believe that Trent Johnson is going to lead this program out of the Big 12 cellar, but I just don't think it's going to be this year. Next year, maybe, but not this year. Aside from Kyan Anderson, there's not another scoring threat on this team. Devonta Abron, again could have been a breakout guy in the post for TCU, but that will have to wait until next year. The lingering health issues of Amric Fields aren't exactly making things any better either. When healthy, Fields can be a match up problem for the opposition, but if he can't shake the injury bug, he could be a liability on the floor. The only real hope for TCU is that Karviar Shepherd is as good as advertised and Anderson can play at an all-conference level.

And Now The Final Prediction

Well, it's going to be a rough winter in Cow Town. Last year TCU went 2-16 in Big 12 play with inexplicable wins over an NCAA tournament team in Oklahoma and Big 12 champion, Kansas. The "WTF Factor" won't be quite as high this year, but I see TCU equaling last year's conference win total and hey, why not besting it! It'll be a 3-15 last place finish for the Horned Frogs with two wins over the abysmal bottom half of the Big 12 and one win over a team from the top half that makes everyone simultaneously laugh, yet ask aloud how in the hell that just happened.