Year one in the Big 12 did not go as planned for the Mountaineers. Coming off five straight NCAA tournament appearances, West Virginia had to think they'd enjoy similar success in what was perceived as a lesser basketball conference. Prior to the start of last season, Bob Huggins even fired up the sarcasm gun as only he can and asked, "What did they pick us, sixth? If we're the sixth best team in that league then it's a hell of a league."

Huggins and his young roster were in for a rude awakening as they stumbled to an 8th-placed finish, going only 6-12 in the league and 13-19 overall. Now, that's not to say that the Big 12 was that much better than the Big East, especially as the 'Eers likely would have struggled in the Big East as well, but Huggins clearly underestimated the conference he once coached in and he said as much earlier this month at the Big 12 media day.

Regardless, last season is history and after struggling with the travel, new arenas and new rivals, West Virginia should be better equipped to win in year number two. The 'Eers will be breaking in a new array of talent inside, but it's the development of their young guards that will bring more "W's" this season.

West Virginia Basketball: Now with fewer Turkish guys who can double as our mascot!

Who's Worth Knowing About

When looking at this West Virginia roster, you have to start with sophomore guards, Eron Harris and Terry Henderson. Harris shook off an inconsistent start to his freshman season and ratcheted things up a notch once conference play began, becoming a consistent double-digit scorer in league play. His 9.8 PPG led West Virginia and he shot a respectable 35.2% from outside. Henderson didn't score it quite as well as Harris, but he was more efficient from outside, knocking down 40% of his treys. Huggins expects each to be much better this year and will count on the young duo to shoulder the scoring load. Harris and Henderson will be joined in the back court by juniors Juwan Staten and Gary Browne. A Dayton transfer that considered Iowa State, Staten came into last season with high expectations and just didn't deliver. He was solid, but wasn't the dynamic point guard Huggins thought he was getting. Staten has no outside game whatsoever, but did dish out a decent 3.3 assists per game. Browne provided occasional scoring pop off the bench, but like Staten, he struggles shooting the ball and is more of an energy/defense guy.

The interior of West Virginia's team has been completely overhauled. Deniz Kilicli graduated and Aaric Murray was dismissed from the team, leaving only Kevin Noreen as a holdover from last season's rotation. Huggins addressed the post in a major way, though, bringing in six forwards, including 4-star talents Elijah Macon and Devin Williams. The '13 class also included junior college transfers Jonathan Holton and Remi Dibo who are expected to contribute right away.

Say Something Nice About West Virginia

Of the teams not picked in the top four in the Big 12, West Virginia is the one team in the conference that I think could surprise and end up getting an NCAA bid in March. I think it's going to take a masterful coaching job out of Huggins, but would that really be that out of the ordinary for the future hall of famer?

And Now An Uncalled For Cheap Shot 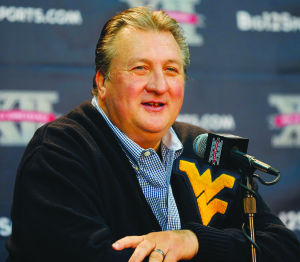 That is Bob Huggins at the Big 12 Media day earlier this month. In case you're wondering, yes, that is a letter sweater. That is for real. Seriously, who in the hell...

...awww who am I kidding. That is fucking awesome. Never change Huggy Bear

The Cyclones swept West Virginia, but in bizarre fashion. Both games featured Iowa State getting out to huge leads, only to see the Mountaineers come storming back and making things nerve-racking down the stretch. In Ames, it was a Georges Niang layup in the final seconds that allowed Iowa State to prevail while in Morgantown, a late Cyclone push put things out of reach and secured the victory.

Why West Virginia Will Finish 6th

If the talent inside comes together, I actually think this team could be better than Kansas State and hell, maybe even challenge Iowa State or Baylor. Still with an abundance of youth, there will be inconsistency and struggles mixed in with moments of brilliance and that's why I'm calling for a 6th-place finish. There's a good amount of talent on this roster, but with no seniors, next year is the year Mountaineer fans should all be excited for.

And Now the Final Prediction

I think this looks like an NIT team, but if West Virginia can steal a non-conference win or two from the likes of Missouri, Gonzaga, Purdue and potentially Wisconsin or St. Louis, depending on how they do in the Cancun Challenge, then they'll have the chance to position themselves for the bubble. I see somewhere in the neighborhood of 8-10 conference wins and a much tougher road environment for league opponents who went 6-3 in Morgantown a year ago.