This weekend's Farmageddon match up in Manhattan will be the fifth time Paul Rhoads faces Bill Snyder. Snyder is one of three Big XII coaches Rhoads has yet to win against.

Another week and another case of two teams seemingly headed in different directions.  After a tough slate to start the season against Oklahoma State and Baylor the Kansas State Wildcats have rebounded to look utterly dominant in their post bye week win over West Virginia last week.  Snyderball is starting to reemerge in the Little Apple and Kansas State's slow climb up to 34th overall in the F/+ rankings confirms that.  If you want to compare rankings this team is hovering around the final finishing place for the 2011 Wildcats (29th).  The two teams are far from the same, but those rankings show the similarities between the two squads.

Conversely, Iowa State seems to be stuck in neutral right now.  After an equally tough stretch (possibly tougher with the addition of Texas Tech early in the conference season) the Cyclones are finding themselves in a bit of a rut.  There were 27 points put up last week against Oklahoma State but only 20 came when the game was competitive and the offense managed to literally give the Oklahoma State defense 14 points.  That's a 13 point net positive.  Not good enough to win in the Big XII.

Then of course there's the defense, which now ranks dead last among BCS conference schools in total defense.

People have talked all week about how the Farmageddon games between Rhoads and Snyder have been competitive and how this year should not be an exception.  While I agree the potential is there for another great game it's hard to see it when looking at how these two teams have responded to the adversity they have faced this season.

Iowa State sleepwalked through the first quarter and spotted Oklahoma State 21 points.  Despite cutting the deficit to 28-20 at half the Cyclones failed to show up in the 3rd quarter and let Oklahoma State rattle off 24 straight points en route to a 58-27 defeat.

Kansas State took a two point game at the end of the 3rd quarter and blew it open with a three touchdown barrage in the final stanza to send West Virginia home with a 35-12 defeat.  Kansas State's barrage came via touchdown passes to Tremaine Thompson and Tyler Lockett with the final icing on the cake delivered by a 4 yard plunge from John Hubert with 21 seconds left.

Iowa State has not beat Kansas State since 2007 and has not won in Manhattan since the improbable comeback from Dan McCarney's 2004 squad that came via 28 4th quarter points.  Overall the series stands at 49-43-4 in favor of the Cyclones.

In the interest of sparing us all another write up about how this offense cannot seem to click I decided to go with a Pros and Cons style of preview for each of the units.  It's the only way to highlight the few bright spots this team has.

Pro: The offensive line blocked well enough against Oklahoma State to allow the offense to move the ball early

Con: Uncharacteristic mistakes and lack of accuracy by Sam Richardson combined with dropped balls by the wide receivers allowed Oklahoma State to jump out to a 21-0 lead before people who snuck in their beers could finish them.

Pro: Sam Richardson had 64 yards rushing last week, including a long of 51 yards.

Pro: Grant Rohach looked decent in his first extended playing time and got the ball out quickly.

Con: It was often to the other team.

Con: It was Bundrage's first touchdown catch since the 97 yard reception against Texas.

Con: Iowa State is 111th nationally in red zone attempts with 21, or an average of three per game.

This defense lost a lot of fire power from last year's squad with the only big time  returnee being safety Ty Zimmerman.  However, once the offense settled down and went back to Snyderball the defense started to come around.  Last week against West Virginia they were virtually dominant by holding the Mountaineers to 4 of 16 3rd down conversions and only 103 yards rushing on 29 attempts.  They surrendered 264 yards through the air, and like previous years this remains their weak spot, but West Virginia only completed 19 passes to 41 attempts. 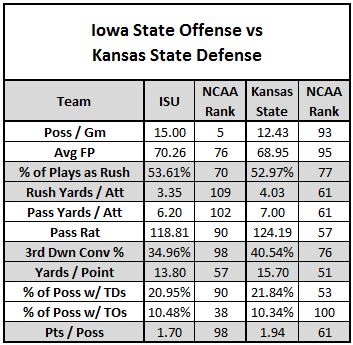 Stats again courtesy of Kirk Haaland at Encyclonepedia. The very top stat is the most relevant here.  By virtue of their offensive ball protection the Kansas State defense is facing less than 13 possessions per game, which allows them to remain fresh and play with the speed and discipline they're known for.  Aside from that stat their defense is average, but still ranks higher than Iowa State in nearly every category.

Just like every other edition of Farmageddon since Snyder came back into the fold this match up is going to be about who can get themselves into 3rd and short situations and ultimately convert.  West Virginia's 25% success rate on 3rd down last week kept them from maintaining enough possession to move the chains and thus put up points, but this is nothing new to that team.

Last year Iowa State managed to move the ball well enough against a better Kansas State defense despite only having 65 yards rushing.  Snyder likes to play the bend, don't break style of ball with his defense and usually in a Cover 2 type of mold.  There will be spots open in the zone and Bundrage and Tad Ecby should have room to work, but like last week execution has to be an emphasis if this team wants to score points.

There are no pros here.  This defense is awful and it only has managed to slide further down after Jevohn Miller found more playing time.

Rounding into form is the best way to describe this offense.  Despite early season struggles with Jake Waters the offense has begun to hit its stride.  Strangely enough Snyder is doing something that Rhoads still has failed to do and that's have success with two quarterbacks.  Waters and backup Daniel Sams managed to combine to go 18/21 for 291 yards and four touchdowns last week.  Waters had the majority of the passes (13), yards (198), and touchdowns (3) but Sams was effective enough to be a threat himself in the passing game.

However, the biggest change from the beginning of the season until now is how Waters fits in the running game.  There was talk that he was never going to be a Collin Klein-type quarterback (and he isn't) but last week he ran the ball 10 times for 55 yards.  Just enough to keep defenses honest and open things up for the receivers and Hubert.  With a defense that surrenders 219 yards per game on the ground coming to Manhattan you can expect to see a healthy dose of Waters, Sams, and Hubert on the ground. 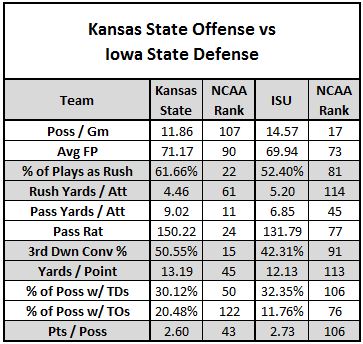 Here again you see Kansas State's phenomenal ball control and how they do so much with their limited possessions.  Conversely, Iowa State's defense has been on the field a lot this season due to various issues with the offense.  The other stat that jumps off the page is Kansas State's 11th overall ranking in pass yards/attempt, which illustrates how much the run is setting up the momentum changing throws.

Kansas State doesn't do much of anything special and everyone from the fans, to the pundits, to the coaches know this.  This is a very fundamental football team that relies on the run game to move the ball downfield and will eventually test the discipline of the safeties with deep balls to Thompson or Lockett.

Last year the defense minimized the big plays from Klein and company but did so with stellar performances by both Jake Knott and A.J. Klein.  There is no one on the roster who resembles either of those two and this defense is getting worked in the run game because of a lack of fundamentals.  So you have a fundamental team hitting their stride against one doing the exact opposite.

Don't expect a spectacular game from Kansas State on Saturday given how Iowa State has failed to stop the run in conference play.  This game is going to be a strong dose of Waters and Sams on QB Isos followed by some zone read running with Hubert.  Get to midfield and then comes the deep shot to Thompson or Lockett.  Rinse. Repeat.

Con: It's onside kicks with four attempted.  Tied with SMU and Indiana.

Solid, but Not Quite a Lock Prediction: The offensive line turns in its best performance of the season.

Would Love to See, and MIght: Bundrage inches closer to Todd Bylthe's single season TD record of nine with another TD.

Would Love to See, but Won't: A functional running game.  Iowa State couldn't do it last year, hasn't been able to do it this year without Aaron Wimberly, and isn't likely to do it with a banged up Richardson on Saturday.

Manhattan is the home of Tallgrass Brewing and some excellent brews.  One of these brews is Buffalo Sweat which is from my favorite stout family: milk.  As the seasons begin to change I have been on a stout kick and this one is solid.  It's a relatively light 5.0% ABV but goes down easy and is perfect for the man watching football on a late Fall Saturday.

This is one of those games I really wanted to talk myself into Iowa State somehow winning but I just can't do it.  I don't believe in the "x team is due" theory of picking games as each team is different from one year to the next, but given how close these games have been between Rhoads and Snyder the odds favor an Iowa State win at some point.

Is that win on Saturday?  Probably not.  Kansas State has started to hit on the right cylinders to move the ball and Iowa State is still struggling for consistency on both sides of the ball.  Plus the game is in Manhattan and that has just not been a strong stadium for Iowa State when Snyder has been at the helm.

In the McCarney era this is one of those games that turn into a nightmare halfway through.  Team holds it close to start but ultimately execution on both sides of the ball blow it wide open.  I don't think that this team has reached McCarney levels of apathy quite yet but rather have been bitten by the injury bug while simultaneously dealing with youth and an overmatched defense.

Despite all the issues this team has faced in the month of October I still see more fight from these guys in fleeting moments when compared to those abhorrent 2003 and 2008 squads, but the results have yet to show up in the win column.

The team takes a step in the right direction and gives Kansas State a hell of a battle on Saturday, but it won't be reflected in the final score.

PS - As always, leave your predictions below and be sure to look for Norman Underwood and Cylentbutdeadly in Manhattan this weekend.