Iowa State travels to Normal, OK to face the Oklahoma Sooners in what will be like every other game in Norman in Iowa State's history: a blowout.

Every writing class we take as students teaches us to write every story with a clear beginning, middle, and end. Well this isn't writing class and this preview is on a game that Iowa State has won only five(!) times in their existence. So pardon me while I give a big middle finger to every English teach I've ever had and do this thing the way I want.

Which is poorly, and without much regard for what the game might actually entail.

The Iowa State offense continued their quarterback carousel Russian roulette with both Grant Rohach and Sam Richardson seeing action. In a key drive late in the 4th quarter Richardson was brought in to run the ball until the 3rd down situation necessitated some long developing play action pass play. The end result was a punt (a poor one) and the defense laying down for yet another game winning drive as TCU escaped Ames with a 21-17 victory.

In the bathroom after the game the most fitting comparison to this season finally happened in front of me. Before the game I had purchased a program so I had something to write on while charting the game and as I was using the bathroom post game I had said program tucked under my arm. Somewhere around the time I was zipping up the program fell out of my arm and into the pool of backed up toilet water around me. Once I picked the program back up I realized two things: One, there was shit on it. Two, there was also undigested onions.

I've kind of lost how this compares to the season but I imagine with shit, backed up toilet water, and a program outlining this year's team someone can come up with an apt comparison. Either way it was $5 almost literally down the toilet.

Oklahoma held a brief 5-3 lead going into the 4th inning of their game against Baylor before finally succumbing to the Baylor Machine in a 41-12 defeat. Bob Stoops and offensive coordinator Josh Heupel inserted Trevor Knight into the line up to get a spark from the quarterback position and did so by calling a different set of plays than they were with Blake Bell behind center.

What a novel idea.

As touched on in nearly every other preview of this game, Iowa State is an inexplicable 5-70-2 all-time against Oklahoma and just 3-36-1 in Norman. The last Iowa State win in this series was in 1990, which makes it completely logical for me to leave out the scores of the last five games.

That Cyclone team that won in Norman had just two wins heading into the match up and finished with four wins on the season. Could magic happen again this week? No.

Good news: The Oklahoma defense is ranked 5th in the conference against the run. Bad news: they're ranked 2nd in scoring defense, passing defense, and total defense.

Mike Stoops has revitalized the defense in his second year in Norman and has switched to a mix of 3 and 4 man fronts to help bring pressure from multiple angles against the spread offenses that permeate the Big XII. Early in the game against Baylor their blitz packages kept the Bears off balance long enough to allow the Sooners to hang around but a struggling offense (and aggressive Baylor defense) eventually forced the Sooners to bow out. 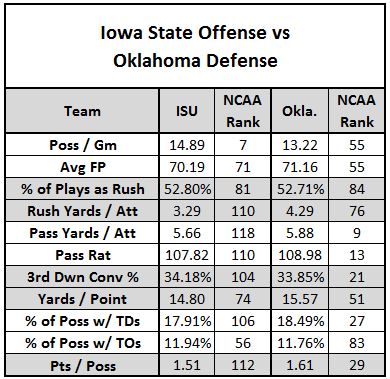 Similar to the TCU game, if Iowa State plays to their average they'll play nearly right into OU's. This isn't a good thing. If there's a bright spot in these stats it's.... possessions per game? Wait that means we're going three and out a lot and giving the opposing offense the ball just as much? Oh, well... dammit.

Better Iowa State teams have went to Norman and been smoked by the Sooners. Remember Jared Barnett? He who owns three of the top five offensive performances in Iowa State history? Oklahoma held him to 146 total yards in a 26-6 victory in 2011. This offense would have to put in an abysmal performance to be worse than that but at this point would anyone be shocked if it happened?

Casey Pachall got very little going through the air on a windy day in Ames but Trevone Boykin found his groove while accounting for all three of TCU's touchdowns. The defense has played well in stretches this year, and they certainly did last week, but the inconsistency is still going to happen just enough to keep them from truly bailing out an incapable offense.

The Oklahoma offense has been far from special in Big XII play ranking 6th in scoring offense and 9th in passing offense (just ahead of Iowa State). However, they rank 2nd in rushing offense and will be facing the statistically worst rushing defense in the conference. 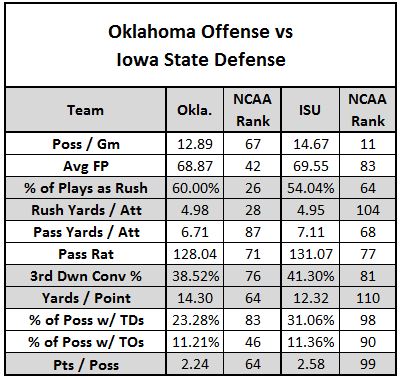 Another stat table, another situation where nothing favors Iowa State. If OU plays to their average the Iowa State defense will have a "good" day. If they play above average then we'll see exactly what we've seen the rest of the season.

Something something Trevor Knight will have a career day running the same zone read schemes that Iowa State runs and has faced literally hundreds of times in the Paul Rhoads Era. 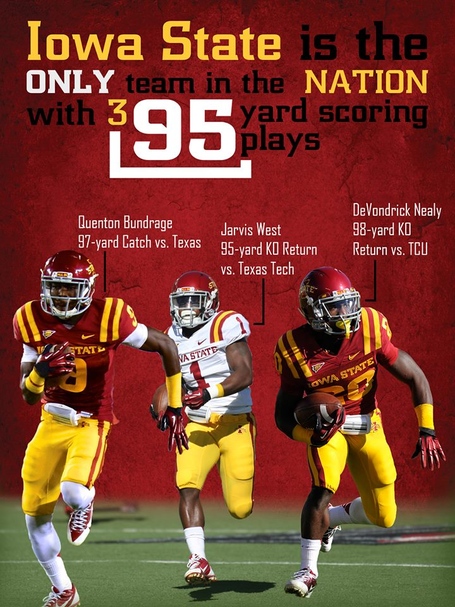 Seriously, Kirby Van Der Kamp had a solid game last week until that last punt. You always remember the one that got away...

It's been fairly cold in Iowa this week and there was even some snow on Tuesday, so my stout kick continues. Here's a world class stout that many of you have probably tried before but I would recommend it anyway: Samuel Smith's Oatmeal Stout.

The only thing to really analyze here will be how many times OU's band plays "Boomer Sooner" in sympathy after Iowa State gets a first down. In our eyes it will be one too many, in theirs it won't be enough.

PS - Aw, fuck it. Leave your predictions if you want.