Kansas State did everything right while Iowa State looked listless and ill prepared for the 2013 edition of Farmageddon. Ultimately it was Kansas State's physical offense that made the difference in the 41-7 victory for the Wildcats.

Share All sharing options for: Farmageddon Recap: The Downward Spiral

Stop me if you're heard this one before: Iowa State starts a game poorly on both sides of the ball and the game immediately felt out of reach after the first two scores from the opponent.

Kansas State ripped off 44 yards on their first two plays from scrimmage and punched it in with John Hubert from 9 yards out just five plays later.  After an Iowa State punt Kansas State responded with a 54 yard run by Hubert but the defense miraculously held on to allow only a field goal.

That's all it would take as Iowa State never felt in the game once down 10-0 and ultimately fell for Iowa State's 6th straight loss in the series.

Defensively the team was up and down throughout the first half.  After allowing big plays on the first two drives the defense stood up and forced a three and out to keep the dam from breaking in the first quarter.  Yet once Daniel Sams was inserted at quarterback for Kansas State the tide once again changed.  Sams accounted for 56 of Kansas State's 71 yards on the drive and capped it with a 1 yard plunge to make the score 17-0.

As the game wore on the defense wore out.  Seven plays of 20 yards or longer were surrendered by this defense and not many teams will overcome that type of effort.  Things got so bad that a clear pass interference call on Deon Broomfield in the 4th quarter still resulted in a touchdown reception for Tramaine Thompson.

Once again the Iowa State offense failed to keep pace and opened up the quarterback carousel for the third straight game when Sam Richardson started 6/12 for only 38 yards and an interception.  Grant Rohach didn't fare much better and finished 11/24 for 88 yards and two (terrible) interceptions.  It's easy to place the blame on the quarterbacks but this was nearly a total team defeat.

The offensive line again failed to sustain blocks in the pass game and routinely gave up pressure on passing downs to basic three and four man fronts.  The loss of Daniel Burton, the only lineman to play in all eight games this season, only made matters worse.  The rushing game found life and gained 123 yards but once the game got out of hand the running backs became virtually useless.

If there is one bright spot it's DeVondrick Nealy scoring in his third straight game and leading all Iowa State rushers with 53 yards on 12 carriers. 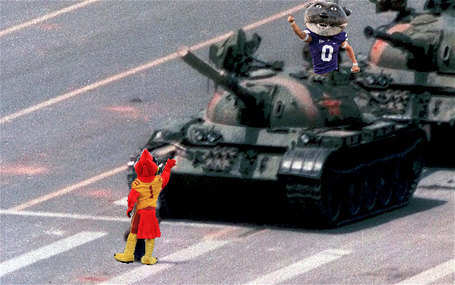 Iowa State returns to action next week with an 11:00 AM kick off against TCU on FSN.