Share All sharing options for: 3sus of Nazareth: 3-point Savior

Greeting friends! It is with great joy that I come today to share the wonderful story of 3sus of Nazareth - Son of The Mayor and 3-point Savior. I wasn't always a believer. You see, my life used to be a Mess. I cursed the heavens and questioned if there was really anyone out there looking after me at all. Then I heard of the redeeming power of 3sus of Nazareth. Born of humble beginnings, 3sus of Nazareth came to these parts from the northern lands of Canada and he touched my soul. Please sit back and enjoy as I tell some of my favorite stories of 3sus of Nazareth. Praise be to Him!

The Birth of 3sus is Announced

1 The Lord Hoiberg sent the angel Barry Stevens to a town in Canada named Nazareth. He had a message for a young woman promised in marriage to a man named Joseph, who was the descendant of King Orr. Her name was Mary. 2 The angel came to her and said, "Peace be with you! The Lord Hoiberg is with you and has greatly blessed you!" 3 Mary was deeply troubled by the angel's message and she wondered what his words meant. 4 The angel said to her, "Don't be afraid, Mary; Hoiberg has been gracious to you. 5 You will become pregnant and give birth to a son and you will name him 3sus. 6 He will be great and will be called the Son of The Mayor. The Lord Fred will make him a king, as his ancestor King Orr was, and he will be the king of the descendants of the Roland Rocket forever; his kingdom will never end!

7 Mary said to the angel, "I am a virgin. How, then can this be?" 8 The angel answered, "The Holy Hilton Spirit will come upon you and The Mayor's power will rest in you. For this reason, the holy child will be called the Son of The Mayor. 9 "I am the Lord Fred's servant," said Mary. "May it happen to me as you have said."

The Temptation of 3sus

1 3sus left his official visit in Ames, renewed with the Holy Hilton Spirit. He then was led into the desolate hellhole that is Waco, Texas where he was tempted by Scott Drew for forty days. In all that time, he didn't accept anything. 2 Drew said to him, "If you are Hoiberg's son, make this three-point shot right now." 3 But 3sus answered, "The scripture says, "basketball players can not live on threes alone." 4 Then Drew took him up and showed all of the town of Waco. 5 "I will give you all these Waffle Houses and ten grand," Drew told him. "It has been handed over to me and I can give it to anyone I choose. All this barren wasteland will be yours if you worship me." 6 3sus answered, "The scripture says, 'Worship the Lord Hoiberg and serve only him!' " 7 Then, Drew took him to the Baylor basketball complex and showed him the two Elite 8 banners and highlights of past worshipers of Drew. 8 "You can be a part of this. You can have this success. What can The Mayor give to you?" 9 But 3sus answered, "Do not put The Mayor to the test. He will triumph, and besides, he owns your ass in head-to-head match ups anyway." 10 Drew had finished his tempting and left 3sus to go pay somebody else. 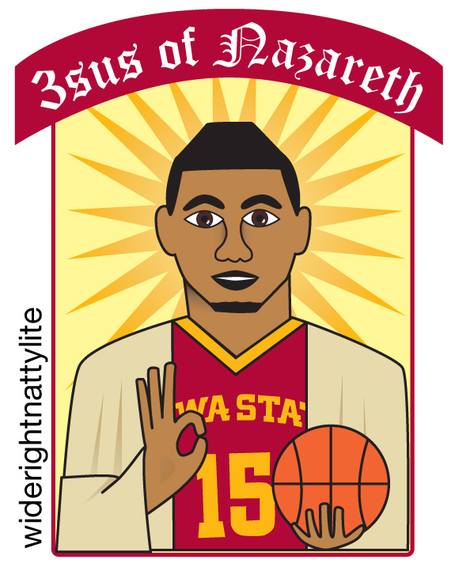 1 3sus and his apostles traveled to Ames. When the crowds heard where he was going, they welcomed him and followed him as he displayed the righteous power of the Kingdom of The Mayor. 2 When the sun was beginning to set, the disciples came to him and said, "We have not the means nor the ability to feed the crowd the 3's they crave." 3 3sus said to them, "You yourself can not give them these 3's?" They answered, "All we have are five straight misses and two disciples who can shoot, but are in foul trouble." 4 3sus looked at the five straight missed shots and the two disciples in foul trouble and raised his hands to heaven, thanked Hoiberg and reigned down eight 3's upon the masses of Hilton Coliseum. The crowd had more than enough to satisfy their hunger.

The Parable of the Lost Transfer

1 One Day when many wayward transfers and other outcasts came to play with 3sus, the Hawkeyes and Jayhawks started grumbling, "This man welcomes outcasts and even plays with them!" 2 So 3sus told them this parable: Suppose one of you has a 100 coveted prospects, but one of them stands out above the rest, what do you do? You leave the other 99 and go pursue the one you want until he commits to you. 3 When he does, you are so happy that you bring him to your home and celebrate. In the same way, I tell you, there will be more joy in Hilton over one sinner who repents than over 99 average prospects who did not need to repent, but were the type of guys we got with McDermott.

1 One day, 3sus got into a game against the Wolverines with his disciples and said to them, "let us go out and triumph over this foe." So they started out, but as they were playing, 3sus fell asleep. 2 Suddenly a strong wind blew through the halls of Hilton and the court began to fill with mistakes, so 3sus and the 12 Cyclones were all in great danger. The disciples went to 3sus and woke him up, saying, "Master, Master! We are about to lose!" 3 3sus got up, threw a rock in a basket and held it to the sky as he ordered the winds to cease and there was a great calm. 4 Then he said to the disciples, "Where is your faith?" But they were amazed and afraid and said to one another, "Who is this man? He fears not the winds of adversity and he plays without fear."