Iowa State hosts the Kansas Jayhawks on Senior Night on Saturday. Iowa State is looking to pull themselves out of the cellar while Kansas is looking to build of their momentum gained by upsetting West Virginia last weekend.

It's hard to care anymore, but at least show up to Jack Trice on Saturday and send off these seniors with your cheers:

Iowa State took a strong first half and flushed it down the toilet in a 48-10 loss to Oklahoma.

Kansas holds an all-time edge in the series 48-37-6 but the last three have went in Iowa State's favor.

Admittedly I have watched very little film on Kansas as of late, but if their defense is still doing the same things they were earlier this year then they'll try to be aggressive in the front seven but completely shit the bed in the back four. They're near the bottom in every major defensive statistical category in the Big XII and allowing over 30 points per game. 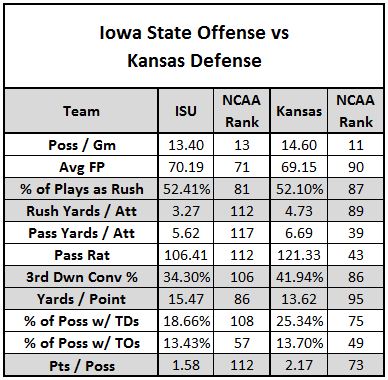 When Kirk Haaland sent these over to me the other day he titled the e-mail "Stat Tears", and he couldn't be more correct. Neither team does anything well, except possibly hold onto the ball in Iowa State's case. It's always a scary proposition when one team playing above their average will equal the other teams' average. Meaning something has to give in what will be a very sloppy and fundamentally terrible game.

Courtney Messingham worked Kansas' defense hard last year when Sam Richardson came in. A solid mix of running and moving the pocket in the passing game kept Kansas off balance all night. In all four of Richardson's scoring tosses the safeties were the liability and I expect the same thing on Saturday.

Except Grant Rohach has a questionable arm and once again two quarters of play will be worthless in the passing game with a strong northwest wind expected. Running the ball will be key here and there is hope that last week's first half performance against Oklahoma might be a sign of things to come as the line gets healthy and gains more experience.

It's the Jeremiah George and Jacques Washington show. The fact that Washington might end up on an All Big XII team list is gratifying and horrifying all at the same time. Washington deserves the recognition given how much he's had to hold together, but this defense would be so much better if he wasn't always covering up other's mistakes and could play his game.

Prone to fast starts the Kansas offense has scored 77 of their 174 total points in the first half. Weis' teams get out of the gate fast exploiting the other teams' weaknesses. This happened in Lawrence last year when Weis rolled out a triple option look that Wally Burnham didn't have on the call sheet to defend.

That's what scares me the most about this game. Weis has shown himself to be great at game planning and early execution and this defense has numerous weak spots to exploit. 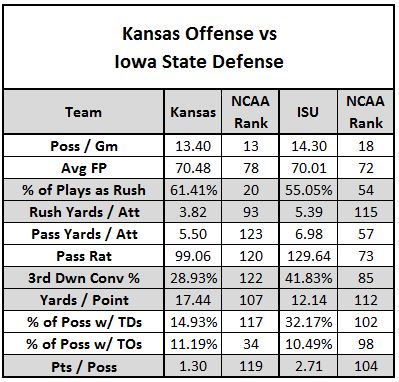 More stat tears. The only saving grace here is Iowa State's defense is markedly better than Kansas' offense in some of these categories and if one or the other plays to their average it should favor Iowa State.

As long as Kansas doesn't get out of the gates quickly with a healthy dose of James Sims and the possible heavy usage of Montell Cozart then the Cyclones should be ok.

If I was a betting man though I would expect to see Weis roll out the same triple option style look he had last year and use Cozart and Sims to abuse the defense Jevohn Miller.

It's time for the 5th Annual Deer N Beer tailgate with our group. We'll have some tasty deer burgers to go along with a litany of "shitty" beers including Hamm's, PBR, Schlitz, Stagg, and many many others. We're in G7 for the final time this year so stop by and give our roulette wheel a spin to pick your beer!

Iowa State has more talent than Kansas. People can argue with me until they're blue in the face and I won't back off that. Iowa State should win this game and up until the second half of last week I was fully convinced they would. The team had shown no quit through 9.5 games and then Oklahoma took the field in the 3rd quarter.

The offense never adjusted. The defense all but gave up in the run game, and the wheels fell off even worse than they had against Baylor and Oklahoma State.

Luckily for us this is a Kansas team that is not very good on the road, has questionable stretches of play more than they have good stretches, and it's Senior Night in Jack Trice.

These guys deserve to go out with a win, and I think the right mix is there for it to happen, but it won't be pretty.

PS - Stay warm on Saturday folks. You can't wear what you don't have so bring extra layers even if you won't use them.

PPS - Jacques is one of my favorite Cyclones of all-time. I'm going to miss the shit out of him.