Iowa State might not be going to a bowl game, but a bowl is certainly in the plans.

The often-rumored, long awaited project to bowl in the south end zone of Jack Trice Stadium was announced in an Iowa State press conference by athletic director Jamie Pollard. Donors Roy and Bobbi Reiman made a 25 million dollar contribution to kick start the project, which Iowa State hopes to have approved by the Board of Regents and completed by the start of the 2015 football season.

Jamie Pollard would not comment on the added seating capacity of the project, saying that the focus would be on bettering the environment, as opposed to purely adding numbers. The total cost of the project is yet to be determined, with Pollard comparing the process to building a house, with moving parts and schedules. Paul Rhoads followed Pollard's press conference by commenting that the stadium enhancement would "absolutely have an effect on recruiting," saying that recruits buy in with their eyes, and the feel of the stadium would be a very beneficial. 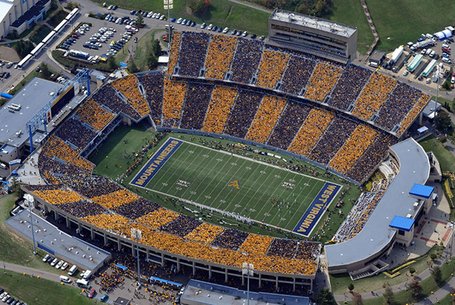 For an idea of what Jack Trice with an enclosed south end zone might look like, look no further than the venue where the Cyclones will be playing this Saturday, West Virginia's Milan Puskar Stadium. For reference, Milan Puskar's capacity is listed at 60,000, though the record attendance is over 70K.