Two teams with futile offenses meet in Ames this weekend but only one has a good enough defense to win a game. Will TCU ride that defense to victory or will Iowa State find some magic for their first Big XII win this season?

Iowa State last won a Big XII home game on October 27, 2012 against Baylor in the 100th edition of Iowa State's Homecoming. Fast forward a year and the 101st Homecoming is this weekend against TCU and Iowa State is not only looking for their first Big XII home win since that victory over Baylor, but their first home win this season.

Standing in their way is a TCU team with quarterback Casey Pachall back but missing running back Waymon James and possibly missing back up B.J. Catalon as well. In addition it's possible that starting cornerback Jason Verrett and wide receiver Brandon Carter will see limited action. TCU is still playing for bowl eligibility but have no margin for error in a season that has seen them drop four games by 10 points or less. The main storyline this year has been TCU's inability to move the ball but even without Devonte Fields the TCU defense has played well enough to stay competitive in the Big XII.

Something has to budge on Saturday but that doesn't mean it won't be ugly.

Another game, another terrible performance by both the offense and defense. Kansas State took a 20-0 game after three quarters and blew it open in the final frame en route to a 41-7 pasting of Iowa State in Manhattan. Grant Rohach came in to relieve an "ineffective" Sam Richardson but averaged 3.7 yards per attempt to Richardson's paltry 3.2.

What started as a guy coming in to take the pressure off an injured starter has once again turned into another quarterback controversy with the rumor that some coaches believe Rohach is actually the answer.

Pachall threw 58 times for 394 yards and led TCU to an early 17-3 lead over West Virginia, but bad turnovers and the lack of running game ultimately did the Horned Frogs in as they fell in overtime to the Mountaineers 30-27.

With Pachall back and slinging the ball it means back up quarterback Trevone Boykin has moved back to wide receiver and contributed 11 receptions for a 100 yards.

Iowa State is 1-3 all-time vs TCU with the only win in the series coming last season in Fort Worth:

Even without Fields and Verrett this defense still has a chance to shine. Gary Patterson is a brilliant defensive mind that has been able to field a strong defense in their first two years in the conference but it's often overshadowed by the inability for the offense to produce.

Patterson favors a 4-2-5 scheme that sets up perfectly for the Big XII and relies and fast and agile players in the middle to help in run support. This team quietly ranks 3rd in the conference in total defense behind Oklahoma and Baylor with the 2nd ranked run defense behind only Oklahoma State at 127 yards per game allowed. The defense slips a little bit in scoring coming in at 6th with 23.6 points per game allowed. Given what you'll see below in the stats you can see that the offensive turnovers play a big part in those numbers. 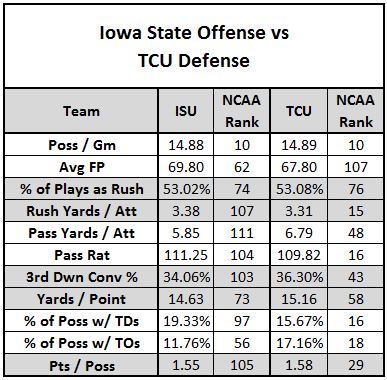 TCU is allowing only 1.6 points per possession on the year, which is good enough for 29th nationally. Even more surprising is how that stat looks when you see that their average starting field position is the opponent's own 32 yard line. Everything here mostly favors TCU and allowing Iowa State to play to their average will still show up as a dominant performance for the Horned Frogs.

Let that sink in for a second.

TCU's defense puts them in a lot of man-to-man situations not too dissimilar from how Texas played in Ames earlier this season. Unlike Texas this is a team that knows exactly where to be and can finish a play with fairly solid tackling. It's horrifying to think that this offense has to face one of the best defensive minds in college football.

Expect a lot of man-to-man in this game with press coverage to buy time for blitzers to get to the quarterback. If it sounds familiar it's because it's been the gameplan for Texas, Texas Tech, Baylor, and Oklahoma State.

Iowa State should take their shots deep early just like last year but will probably need to leave six or seven in to block to do it, which will severely limit Richardson or Rohach's targets. If Rohach starts this game the deep shots are not going to happen given his relative lack of arm strength and the potential for high wind out of the northwest.

A wild card here is the potential return of Aaron Wimberly. He has the speed to work the edges and TCU's scheme usually struggles with outside running.

It's disgusting to think that given the offensive performances this past month that it could very well get worse on Saturday.

Despite the youth, despite Jevohn Miller, despite the lack of a pass rush, and despite the ability to tackle this is still a match up that I like. I liked it before the season started and TCU's one dimensionality on offense still has me favoring it.

Wally Burnham has been running more man-to-man this year due in large part to the extra speed on defense and the inability for guys to read plays and adjust their zones. Actually it's probably the latter rather than the former, but we'll just assume it's the speed.

Nigel Tribune has continued to improve despite being picked on by every quarterback in the league. What started as him getting whipped by Mike Davis against Texas has turned into him getting whipped by the other receivers in the league but not without feeling it first. Tribune is big and physical and his improvement has been evident. Teams can keep picking on him at their own peril as the light bulb shines brighter each and every week.

With the inability of the linebackers to control the middle of the field it has put a lot of pressure on Jacques Washington and Deon Broomfield to help closer to the line of scrimmage and has not allowed them to sit back and play centerfield, which is the obvious strength for both of them. Because of this teams have found yards over the middle all season and my hope is with the lack of explosive players on TCU's side that this defense gets back to the bend, don't break mentality of year's past.

With the exception of Boykin outside there really is not a TCU receiver here that should scare anyone. There are eight receivers with double digit catches but transfer Josh Doctson is their leader with 289 yards on the year.

Now remove Catalon and James and the rushing attack just continues to go downhill. Pachall is going to sling the ball around a lot on Saturday and he's going to be doing it into a strong wind for most of the game. Pachall throws bullets but because of the wind I do not expect to see much of a deep passing game from the Horned Frogs' offense.

Really wish there was more to put in for this offense but with all the injuries and inability to get the run game going they're as one dimensional of a team as Iowa State will face the rest of the year. 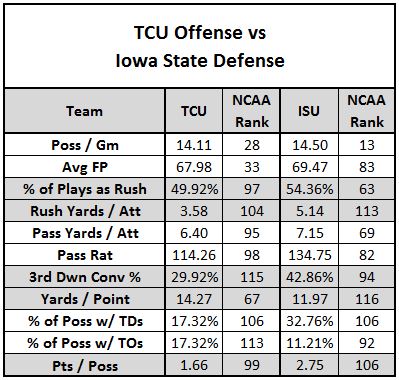 As you can see TCU can't run the ball and Iowa State can't stop it. Something has to give on Saturday but my money is actually on the Iowa State defense stepping up. TCU's problems aren't all on the running backs but are systemic and largely on the offensive line like Iowa State's. So it doesn't matter who you plug in, it's just going to suck anyway.

Eye popping but hopefully not relevant: the fact Iowa State allows nearly a field goal on every possession.

It's the 3rd time I'm mentioning it but I believe it might have a huge impact on the game: wind. Pachall's arm is strong enough to throw the ball into a stiff wind but he's only going to be able to do it 10 yards at a time at best and with receivers who aren't very much of a threat deep. This might be the time Burnham goes old school with his play calling and focuses on keeping the ball in front of the defense and all but daring TCU to run the ball.

Pop in a couple surprise blitzes from a defense that has actually blitzed better than at any other time in his tenure and we may just very well have a game on our hands.

Kirby Van Der Kamp continues to kill it but teams have figured out that even without Jarvis West you shouldn't kick deep. TCU is 9th in the conference averaging only 39.6 yards per punt and this could get ugly given how the wind swirls in Jack Trice and punter Ethan Perry's unfamiliarity with the stadium.

The kicking game will likely be key here as both teams have a tendency to stall out at midfield. If I had to put money on TCU kicker Jaden Oberkrom vs Edwin Arceo or Cole Netten my money is on Oberkrom every single time. Also of note, Oberkrom leads the Big XII in kickoff average and is 4th in touchbacks.

There are only two more opportunities to get black out drunk in the shadow of Jack Trice Stadium and yell obscenities at Courtney Messingham in the coaches' booth and this beer is going to help you get there. Boulevard just released the 2013 version of one of the best beers I have ever had: Bourbon Barrel Quad.

Aged in bourbon barrels for years at a time and then blended this beer brings an 11.8% ABV that will kick you in the ass before you know it. Drink it slowly, but drink it plentifully. For those of you in the Central Iowa area you can poke around your local Hy-Vee to find it or at Beer Crazy in Urbandale. Be warned, it goes fast.

This is a TCU team that is on par with Tulsa in its offensive efficiency but on par with Baylor and Oklahoma State defensively. Barring a complete and utter meltdown of this quarterback situation there should be yards and eventually points to be gained. In all of the muddled Mess that this season has been it's easy to overlook that Iowa State is still 5th nationally in red zone conversions with 21 conversions on 22 attempts. 17 of those 21 scores have been touchdowns. TCU has turned the ball over 22 times, which ranks them 117th nationally, and that may just very well be the key to the game.

TCU struggles in the wind and gives Iowa State more opportunities than they deserve on a short field and blind fucking luck ensues.

PS - All you big dog donors are on alert this week as WRNL invades your space. Through some luck granted to one of our close friends we will be tailgating in Tent Row this week.

We'll be on the North end of the row but the WRNL flag will be flying high like every other week. If you see it stop by and mingle and a special thanks to those who did just that before the Oklahoma State game.

PPS - Predictions as always are welcome below.