The 14,000+ inside Hilton Coliseum as well as the millions watching around the BTWEEII Universe were shocked to see what went down and two days later, we're picking up the pieces and addressing the countless rumors and conspiracies that are bouncing around the Web and Twittersphere. 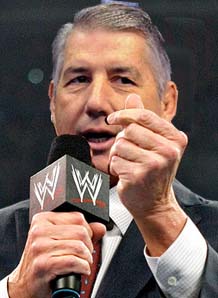 These two teams squared off in January on JACKED! with Team Cyclone controlling much of the match, battering and bruising Team Jayhawk and hitting the Mister Twister finishing move on Team Jayhawk for what looked like a certain pin. Against all odds though, Team Jayhawk's Benny "Smooth" McLemore, managed to kick out of a two-and-a-half count and the "sweet-strokin'-female-pokin'-fine-dinin'-never-chockin" superstar countered with the Heat Stroke for the improbable win!

It was a 10-man tag team match pitting the reigning 8-time champions, Team Jayhawk against Team Cyclone, which was competing for a number one contender spot in March's upcoming Big 12 Last Man Standing tournament. Team Wildcat held the number one contender spot going into the match and this was Team Cyclone's last chance at securing the lucrative spot prior to Big 12 Last Man Standing. 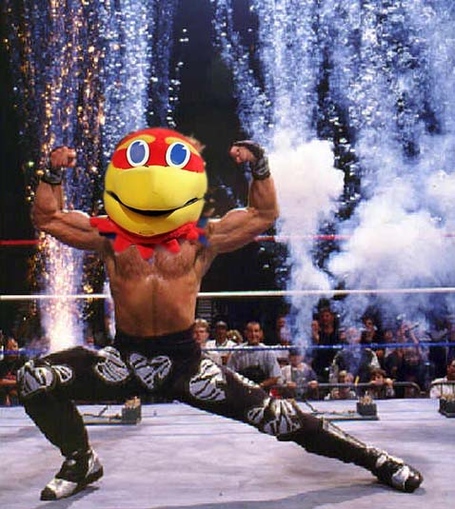 It truly was an all-time classic match. Team Cyclone came out aggressive, firing difficult maneuvers from all over the ring. There was The Virus in one corner. The Texas Tornado Chris Babb in the other. Kaliente Korie "Too Hot" Lucious had the match of his life. For every difficult maneuver though, Team Jayhawk responded. First it was The Smashfro Kevin Young with a few high-flying tricks of his own. Then T-Rel went to work, killing any momentum Team Cyclone had built by kicking out of near falls and landing a few well-placed shots with the encouragement of Red Dirt Billy Self in his corner.

Toward the end of the match, Team Cyclone manager Pretty Boy Fred Hoiberg, "The Mayor With A Pair", managed to distract the ref, which allowed Double-Double-Trouble Melvin Ejim to tag Prince Georges who entered the fray and started beating wholesale ass. Prince Georges connected on the King's Krush, which according to the script, should have been the knockout blow. Team Cyclone looked like they were going to pick up a monumental upset win until the refs started allowing illegal maneuvers and refused to count when Team Cyclone went for the cover and the win.

The Great White Giant clearly raked Kaliente Korie across the face, an outlawed move in BTWEEII, which was GWG's 5th such infraction, a clear disqualification which would have put Team Jayhawk at an obvious disadvantage, but the referee allowed him to stay in the match.

A bewildered Team Cyclone had no idea what was going on and that's when they were blindsided by Elijah "Holy Man" Johnson. Even after being knocked to the deck in a daze, Team Cyclone still had a chance to end the match and did so by the book with a legal cover, but the ringside match coordinator refused to acknowledge the result under the orders of Mr. Bowlsby, chairman of BTWEEII and the surprising return of the hated Dickhead Dan Beebe!

Things started getting weird from there and Pretty Boy Fred knew the fix was in, but it was too late. Mr. Bowlsby ordered that the match be re-started and a confused Team Cyclone had no idea what was happening and while arguing with the refs, Elijah Johnson went to work. In the end, Team Cyclone never stood a chance after the match was re-started. The crowd, sensing that an obvious screwjob was in play was none too happy, showering the ring with trash and voicing their displeasure in what had transpired. 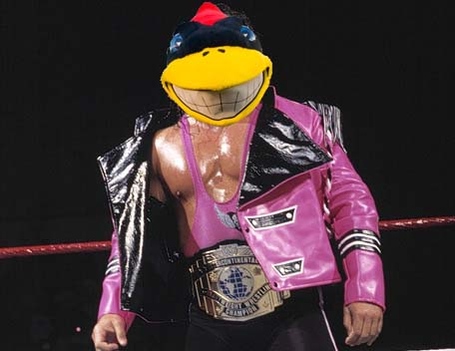 Leading up to the match, a series of meetings took place between Team Jayhawk, Team Cyclone and the chairman of BTWEEII, Mr. Bowlsby. According to our sources, Team Cyclone had agreed to a scenario where they would beat Team Jayhawk on Monday Night JACKED!, keeping themselves alive for the number one contender spot, but would ultimately cede that spot to Team Wildcat, who would end up facing Team Jayhawk at Big 12 Last Man Standing in March. Team Jayhawk agreed to this as did Mr. Bowlsby and the details were worked out for what would be a major upset win for Team Cyclone.

Now, we're told that Team Cyclone manager, Pretty Boy Fred, was skeptical of the agreement, citing past bad blood when Mr. Bowlsby was the ringside manager for Team Hawkeye prior to ascending to chairman of BTWEEII. Pretty Boy Fred was also fearful of a screwjob, knowing that the BTWEEII has a long history of going out of its way to protect its champions, namely Team Longhorn and especially Team Jayhawk. Brawlin' Bruce Weber of Team Wildcat apparently also went out of his way to warn Pretty Boy Fred of a potential screwjob and to be on the look out.

Many already thought that Team Jayhawk was an obvious heel, but this nationally-seen sham only solidified that line of thinking. Team Cyclone has been emerging as a face and has grown quite the backing of the BTWEEII Universe. From what we've been told, Team Jayhawk wasn't ready to share the spotlight and Mr. Bowlsby, not wanting to upset his biggest talent, gave in to their demands under the advice of Dickhead Dan.

With the screwjob result, Team Cyclone will have to wait their turn for a championship push, but in the mean time, Team Wildcat has emerged as the clear number one contender with Team Cowboy somewhat still in the fold. We have been told that a possible Fatal 4-Way match could be in the mix at Big 12 Last Man Standing between Team Jayhawk, Team Wildcat, Team Cowboy and Team Cyclone, but we'll wait and see how that plays out.

For any purists, the result of the main event from Monday Night JACKED! was truly a travesty and a slap in the face to the loyalty and dedication shown by the fans that make up the BTWEEII Universe. When Mr. Bowlsby was named chairman, we all believed that the days of tyranny and the shaky leadership of Dickhead Dan were over. Guess we were all wrong.

Story inspired by the "Montreal Screwjob" of WWE lore.