An open letter to the latest members of Iowa State's football team.

Good morning, and welcome to your first official day as an Iowa State Cyclone! This is a big decision in any young man's life, and you have chosen wisely. There's no better school to prepare you for your life after football, and no better team to represent while you're still playing.

As you embark on your new college and football career, it's helpful to have a few pointers to guide you on your way. While your raw athletic talent has gotten you to this point, it can only take you so far. And you'll only be a freshman next year. Being a freshman suuuuuuuccckkks. So use this guide wisely and take its lessons to heart. If you do, I can promise you that you'll be an All-American by your senior year (Note: Promise not guaranteed). 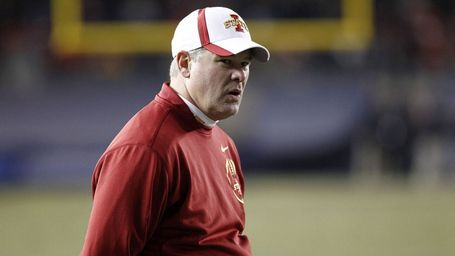 - This is your new coach. Love him and fear him in equal measure; for he rules his program with stern yet benevolent judgment. Quick to anger, quick to hug, quick to cry, he will not lead you astray while you are on his team.

- Iowans are a naturally friendly, helpful people. This may seem creepy at first, especially if you're from one of the asshole states (sorry, Emmanuel Bibbs), but just roll with it. Folks are just being neighborly, so smile and say hi when you're on the street. But stay away from Nebraska. That's where the children of the corn live.

- Don't be a jackass. You're representing Iowa State University, a school that has a lot of people and alumni heavily invested in it. Not to get too specific, but there was an incident with a BB gun not long ago and a couple gentlemen we'll call NeDondrick Vealy and Galbert Ary. It was... idiotic, in every sense. Don't do anything like that.

- Many of you are coming from highly successful high school programs. Not to lower expectations, but you will probably not experience that same level of success at Iowa State, at least initially. But you're building something! Something that will take time. So be mentally prepared to lose at least a few games in your time with the Cyclones, something that some of you may not have experienced in awhile (looking at you, Tyler Brown, Trevor Hodge and Joel Lanning)

- The advantage to this is that if your team wins seven games next year, you are a hero.

- Seriously. Win seven games next year and help Iowa State get to the Holiday Bowl. You'll be knee-deep in farmer's daughters and sorority girls every night of the week.

- These are the logos of the other Big 12 teams. Memorize them, learn to hate them; then crush those that wear their colors and drive them before you while listening to the lamentations of their women.

- This is the logo of the other major football team in the state. Get used to it, because you'll be seeing it a lot, perhaps on a flag that's being used for makeshift curtains on a meth lab. Learn to treat it and its wearers with indifference, until you smash that team under your cleats one Saturday each fall.

- Make friends with people who live in houses. You'll be in dorms for a few years, and those are no fun at all. Ames has a small town atmosphere, because it is a small town. And like any small town, the best times are had with a bunch of friends hanging out in someone's backyard or living room, possibly in a circle around a keg.

- Likewise, learn all you can about Welch Avenue and Main Street. This won't take long, they're not very big. But they are fun, and it's your privilege as a college student to enjoy the facilities on these streets as much as legally possible.

- Most of you are from Florida and Texas. Invest in a good coat. That thin-ass Nike windbreaker isn't going to cut it for four months out of the year. "But... but it gets cold back home in Dallas!" No it doesn't. It absolutely does not get as cold where you're from as it does in Iowa. You don't know cold until you're walking across central campus at 7:00 AM for a test in subzero temperatures.

- You're getting a free education to play a game you love. Get good grades. Education makes you a better person and keeps you eligible. Iowa State just invested in a new academic success center, just for you. Stop by it often and take advantage of the free tutors. They won't write your papers for you, but they'll give you as much help as legally possible (wink!) 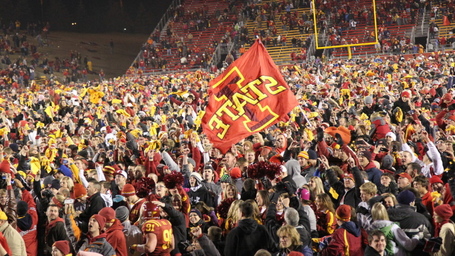 - You've probably seen this scene before. Hell, you might even be in this photo. Lot of good memories associated with this win. You should make it happen as soon as possible, maybe even as soon as next October 3rd.

- Seriously, please don't be a jackass. A lot of people love the university you'll be representing each Saturday. Not to keep harping on this point, but there was an episode a few years ago involving $4, a cellphone and a person we'll call Mason Berryjam. That kind of douchebaggery left a lot of people nervous about these incidents. Again, this is the deal: You get a free education and a chance to play the game you love for a Big 12 football team. In return, you conduct yourself with dignity on and off the field. Seems like a fair tradeoff.

So that's it, a brief, painfully incomplete guide to life at Iowa State. Welcome to the best school in the Big 12, and enjoy your time in Ames. Every one of us did.