You know about Melvin Ejim's rebounding and importance to Iowa State but now he's serving up crow to Kirk Haaland from www.encyclonepedia.com.

But people outside of Ames may not be the only ones pleasantly surprised with the play of Melvin Ejim this season, and I am one of those. It isn’t because of his previously mentioned rebounding that is up three rebounds per game last season or his scoring average of 10.8 points per game (he averaged 9.3 as a sophomore and 10.3 as a freshman). It is his outside shot.

It used to be that when the Cyclones were really working their offense and they made that one final pass that was about to culminate in a wide open three point shot and the ball landed in the hands of Ejim I would wince. Thinking that the situation aligned for a great shot, just not the exact person we wanted to hoist it up there.

That has been the case even throughout much of this season but Ejim has finally served up enough crow that I’m just going to sit and eat it. I’m due.

In his first year on campus, sight unseen, many of us thought he was a three. As we gradually have found out he is more of a big trapped in a body the size of a wing with a motor that is unmatched. What we have really learned is that Ejim may not be a three or a four, he is just a basketball player. In his first season he attempted 56 three pointers and connected on 23.2% of them. As a sophomore he attempted 50 threes and cashed in on 11 for 22%. Then, there is this year.

While his 36.5% from behind the arc may not be staggering to us because of guys like Tyrus McGee constantly knocking down threes, it is more than solid as a spot up shooter. All of the players in the Big 12 combine to shoot 33.07% on the year. Ejim has gotten there by making 19 of his 52 shots from deep. Not a staggering improvement by volume but an improvement none the less. Below is a chart showing his three points attempted vs made per game in 2012-2013. 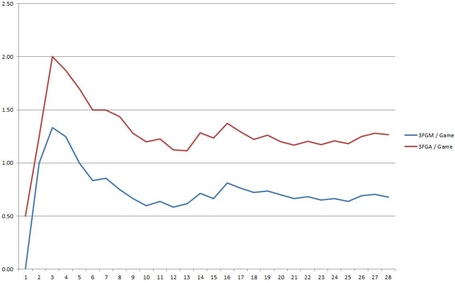 Currently Chris Babb is second in line behind McGee's 45.9% from three point range with 38.2% accuracy from distance. But next in line as the Cyclone's best shooters from behind the arc are Georges Niang at 36.6% and then Ejim at 36.5%. Who would've guessed that Ejim would contend to be near the top of ISU's shooting specialists for this year.

I never would’ve guessed that at the beginning of the season and also wouldn’t have guessed it now. In fact, of Big 12 players that have taken at least 25 three point shots, Ejim has the 17th best three point accuracy this year. His shooting gets lost in the shuffle but that has been a big catalyst for the offensive success.

Opposing bigs are typically left to check Ejim while he plays on the perimeter and he causes very similar matchup problems as Clyburn and Niang when he is making shots. The other reason that EJim has shot so well is because of his selection and he almost always looks to attack before settling for the jumper. But when he gets a look from behind the arc he is usually wide open.

I used to almost hope that Melvin would miss his three point attempts as to not become too confident in his shot for the next time that situation would arise. While that is a half joking comment there is some truth to that. Poor shooters with inflated self confidence can be dangerous to their own team’s offense. As it stands, Ejim isn’t a poor shooter with too much confidence. Instead he is a confident shooter that is peaking at the right time. The good news for everyone is that I’m nowhere near as smart as Hoiberg, Ejim, and company and Melvin has served me a cold and heaping pile of crow.