Share All sharing options for: Know Your Enemy - Notre Dame

I'm borrowing this concept from WRNL contributor, Norman Underwood, who in our crude beginnings, made a habit of familiarizing WRNL's readers with opponents on the football schedule over the years through a series of shall we say, low-brow attempts at humor and misguided stereotypes that fit a sophomoric agenda. In the spirit of this popular series, I only hope I can live up to Norman's legacy.

Onto to pissing off some Irish-Catholics...

By any measure, Notre Dame is one of the more successful men's basketball programs in NCAA history. While never enjoying the success of some of the more traditional blue bloods, the Fighting Irish have been consistently good throughout their history and will be making their 33rd tournament appearance. The Irish also claim two national championships among their tradition. In 1927 and 1936, Notre Dame was awarded titles by the now defunct Helms Foundation. Unfortunately, WRNL has a strict policy of not recognizing pre-historic athletic unions and ranking committees due to their narrow-minded ranking methods and because frankly, we think the FWAA made a bullshit call in 1958 with their football national champion. In summary, according this blog, Notre Dame hasn't won shit. 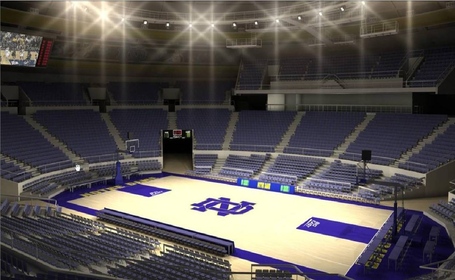 Not a bad venue. Purcell Pavilion at the Joyce Center has seen its fair share of upsets and significant wins over the years. After all, this is where UCLA's record 88-game winning streak was snapped. Kudos for that. Notre Dame drew on average 8,192 fans per game this season in their 9,000+ seat arena. Not a bad number. I mean, the Iowa State women drew 10,628 per game, but hey, at least Notre Dame drew more than Baylor...well, the Baylor men that is (ISU's men drew 14,066 by the way, or 98% of Hilton Coliseum's capacity). 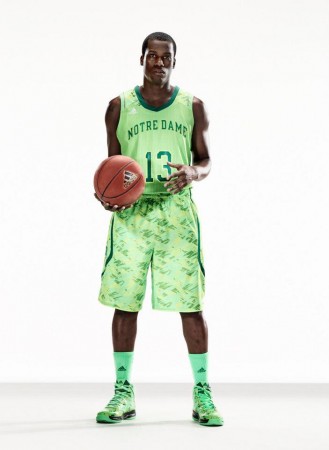 You know things are bad when you do a Google search and you type in "Notre Dame B" and it immediately fills in "Notre Dame Basketball uniforms". There's just so much fail here and we all know these unis suck. Let's move on to something else. 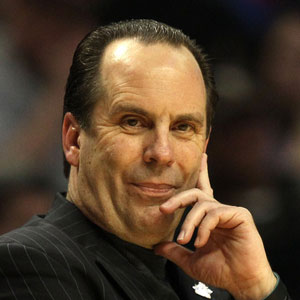 I really don't know what to say except for this; Mike Brey just looks like a prick. He might be a decent guy. He might not. Honestly, I don't really care. If I'm going to muster up the appropriate amount of vitriol for Notre Dame between now and Friday evening, I'm going to go on believing he microwaves fish in the office, cropdusts his coworkers and snaked an account from Jeff in sales and is too big of an asshole to admit it. Fuck him.

Do you like your football Irish fans? Do you follow anything else? Judging by the lack of buzz I've seen around the Notre Dame message boards, the majority of Irish fans either don't care about basketball or don't care about this match up or this year's team. I generally find those scenarios hard to believe because the program has enjoyed consistent success under Mike Brey and the Joyce Center usually seems fullish on TV, but really, one has to wonder. It's not like Bandwagon Bob in Nowhere, Idaho decided he was going to be a Fighting Irish fan because he saw Adrian Dantley on TV when he was a kid. No, instead Notre Dame is just like any other bandwagon fanbase out there, (Texas and USC football, North Carolina basketball come to mind); they claim to be a die-hard [insert school name here] fan, but really, they like one sport, have never seen the team play live and couldn't care less about the rest of the school. In Notre Dame's case, they probably also saw Rudy and declared it the greatest football movie ever, even though The Program came out that same year and we all know it's a far better film.

I also asked our friends over at Smoking Musket what they thought about the Fighting Irish fan base, having been former Big East rivals and all, and they responded with this gem:

Coming from Irish heritage, I suppose I should be offended by this little bastard. The truth is, I'm not. I am, however, appalled by the idea and stereotype that comes with the "Fighting Irish" moniker. While just this last weekend, I'm out celebrating St. Patrick's Day like any good Irish American, and I can't finish my Irish Car Bomb without a few assholes giving me the stink eye and challenging me to a fight. Did I do anything wrong? Of course not. But as we all know, the biggest tradition on St. Patrick's Day is getting blackout drunk and revisiting the contents of your lunch all of over the sidewalk. The second biggest tradition is keeping your head on a swivel and dodging haymakers because you never know when another jerk-douche is going to arbitrarily decide to throw a one-hitter-quiter your way. I've known many a Irish Americans and I can say that especially in the Midwest, we are a peaceful folk. A fine bunch of immigrants that came to the land of opportunity to live off the land and raise a family. We're not out looking for fights and challenging each man's toughness. You've given the Irish people a bad name, Notre Dame, and for that you should be ashamed of yourselves.