Iowa State And The Gold Jerseys Of Doom

The most cursed jerseys outside of Cleveland.

Share All sharing options for: Iowa State And The Gold Jerseys Of Doom

Iowa State's gold alternate jerseys this basketball season have been worn exactly three times, with each instance ending in a loss, with two in horrific fashion at the hands of Kansas and Oklahoma State. Never one to believe in luck, Tyrus McGee, the nation's leading three point shooter at 46.4 percent, donned the gold jersey at the Final Four 3 point shooting contest in an attempt to shed the losing stigma of the gold jerseys. He was eliminated in the first round.

The jerseys have since been called "cursed" by many Cyclone fans. With the small sample size, surely it's just a coincidence, right? Digging deeper, however, revealed more instances throughout Iowa State history when gold was unhelpful to the school's athletic endeavors.

February 27th, 2000: After living in his older brother's shadow in the backfield at Iowa State, Darren was determined to score better than Troy's 6 on the Wonderlic, so he went into the exam room with his newly minted solid gold shirt on. Darren proceeded to score a 4 on the test, the worst in NFL history. 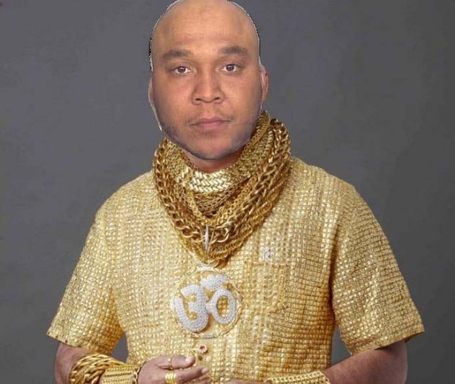 March 15th, 2001: 2 seed Iowa State loses to #15 Hampton after Jamaal Tinsley's layup at the buzzer rolls off the rim. Everyone starts speculating if Tinsley was on the take for the game, but what's completely overlooked is that Tinsley clearly has a gold undershirt on during the game. 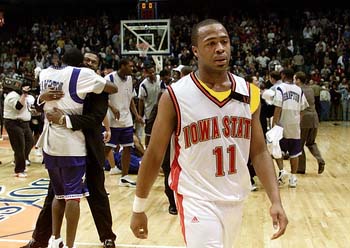 April 2nd, 2001: Bruce Van De Velde calls the Iowa State baseball team to a meeting in his office. The team, thinking that it would be a celebration for completing the 110th season in ISU baseball history, don special gold uniforms for the special occasion. Van De Velde, as it turns out, was not in a celebratory mood, cancelling the program altogether.

September 17th, 2011: Iowa State mascot Cy busts out a gold jersey to root on the Cyclones in their nationally televised game in Storrs, Connecticut. Cy decided that since red usually incites anger, yellow would calm the UConn fans and avoid any incidents. Not to be outsmarted, Husky fans decide to push the beloved toothy cardinal down a flight of steps anyway, fracturing his arm. 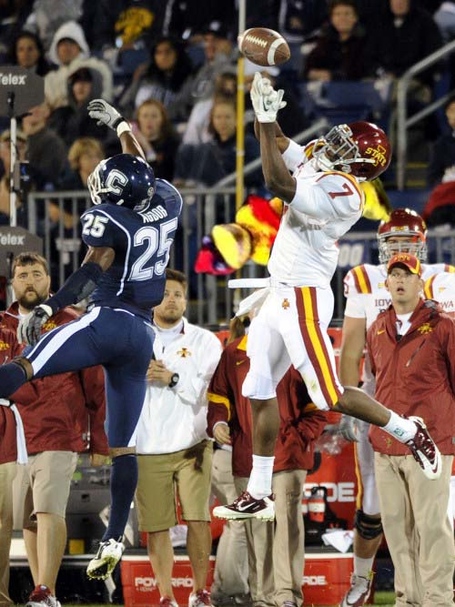 December 30th, 2012: QB Sam Richardson decides to put on a gold jersey on a stroll through Memphis, wanting to keep his red jersey clean for the Liberty Bowl matchup against Tulsa. Richardson ends up with a "flu bug" and had to be pulled from the crushing loss to the Golden Hurricane on New Year's Eve.

Approached with these findings, Jamie Pollard called a press conference in which he stated: "All this talk of a curse is stupid. There's no such thing as a curse, much less a curse on these beautiful gold jerseys. And to prove it, I'll even put a Tyrus jersey on." 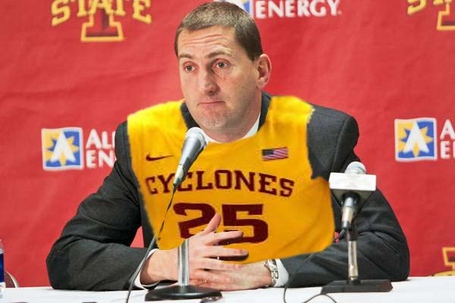 The press conference concluded immediately after that statement, when one of Pollard's own "This is Cyclone Country" billboards crashed through the roof, landing on and breaking his leg.