Congratulations on your selection of the Model 47 of the A.J. Klein Series in the Linebacker family of products. Your selection will reap rewards both now and in the future. Before your new selection arrives at [Insert City] we would like to give you some background on the Model 47 and some care and maintenance tips to ensure this model runs for as long as possible.

Originally designed in Wisconsin the Model 47 was eventually shipped off to Ames, IA to undergo further development under Lead Architect Paul Rhoads and Chief Defensive Engineer Wally Burnham. The Model 47 was so advanced compared to what was already in Ames that an extra development year (commonly referred to as a "redshirt") was not taken. That first year was spent mostly being tested on special teams, but there were highlights.

In 2010 Model 47 got his first taste of full-time action and did not disappoint. Model 47 had double digit tackles in his first three games as a starter and had back-to-back games with a TAINT. As a matter of fact those taints against Kansas State and Northern Iowa started his artful taste for TAINT. All in all Model 47 would finish his career with four TAINTs and tie the NCAA record for TAINTs by a linebacker.

2011 saw Model 47 share the Big XII Defensive Player of the Year honors after racking up 100+ tackles, two sacks, and one TAINT. 2012 was more of the same until counterpart Model 20 went down with an injury. Model 47 struggled the rest of the year while playing out of position but still played well enough to earn All Big XII First Team honors. 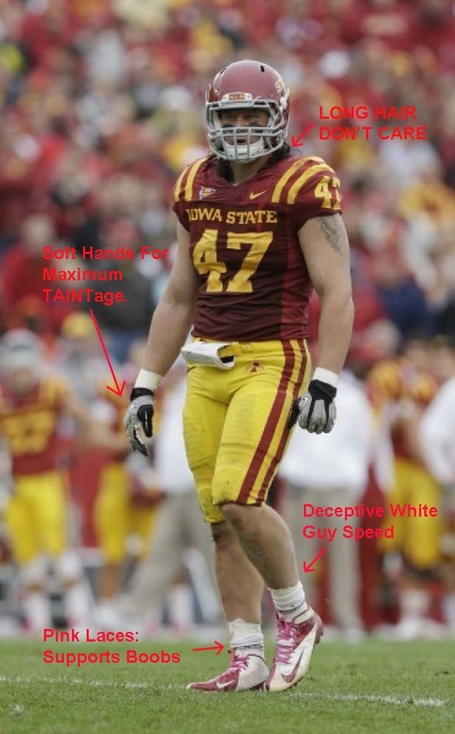 Model 47 has very good to great straight line speed and can excel at getting to the sideline and chasing down runners. He can also cover up apparent soft spots in zones and bait quarterbacks into interceptions. When combining the two you often will witness a TAINT. Model 47 is also intelligent and understands schemes. The technical term for this strength is "heady". Also has the ability to grow great hair.

Model 47 never quite figured out the art of containment while playing in the SAM role, and was often better suited to play MIKE where he could freelance more. Loves to freelance and sometimes will play self out of position or into bad blocking lanes. Can struggle in space if wrong angle is pursued. Cut hair that gave him his power.

Model 47 needs very little care and maintenance to perform at a high level. High doses of film and gym work will keep him in game shape and high quality hair product (we recommend Paul Mitchell) and cheese will keep him happy.

In closing, we would like to congratulate you again on your purchase of Model 47. His time in Ames provided the necessary engineering refinements to move him along to the next level and we hope you enjoy him as much as we did.