Congratulations on your selection of the Model 20 of the Jake Knott Series in the Linebacker family of products. Your selection will reap rewards both now and in the future. Before your new selection arrives at [Insert City] we would like to give you some background on the Model 20 and some care and maintenance tips to ensure this model runs for as long as possible.

Originally designed in Waukee, Iowa the Model 20 was eventually shipped off to Ames to undergo further development under Lead Architect Paul Rhoads and Chief Defensive Engineer Wally Burnham. Like The Model 47, The Model 20 was so advanced compared to what was already in Ames that an extra development year (commonly referred to as a "redshirt") was not taken. That first year was spent mostly being tested on special teams, but there were highlights.

Model 20 started his first game in 2010 with a bang by racking up nine tackles and intercepting two passes on the way to a 27-10 win over Northern Illinois. Model 20 continued his rapid development by racking up 131 tackles in his first full season and garnered All Big XII Honorable Mention.

2011 became an up and down year for Model 20 as he started the year looking like a man with a club for an arm but ended the year in dominant fashion. He racked up 107 tackles including an incredible 18 against Baylor in the game where he separated his left shoulder not once, but twice. Despite his injury Model 20 ended the year in dominant fashion, was instrumental in one of the biggest plays in Iowa State history, and garnered All Big XII Second Team honors.

2012 was the first year since his freshman year where Model 20 started the season with no braces on his body and he looked like a man possessed. 11 tackles against Tulsa and a key forced fumble to turn the tide against the Golden Hurricane. He followed that up with inducing a severe case of Premature Podolak Syndrome by sealing the win over iowa with a late interception. Model 20 by most accounts was having an All Big XII type of season and then the Oklahoma State game happened. Model 20 once again separated his shoulder and the next week he went into the 100th Homecoming game against Baylor knowing it would be his last game in a Cyclone uniform. 11 tackles and a forced fumble later and the development of Model 20 in Ames came to a close. 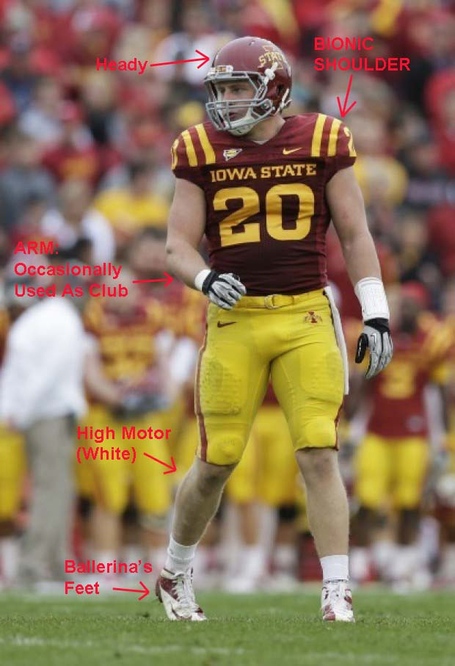 Between games Model 20 should be wrapped in industrial strength bubble wrap, encased in a block of ice, and have a TV parked in front of him playing a constant loop of the that week's opponent. Thaw, unwrap, unleash, repeat.