This Is: Hawkeye Football

Share All sharing options for: This Is: Hawkeye Football

Hello; my name is Norman Underwood. I'm a blogger. I make occasional offensive posts. That one that accused Texas A&M students of raping a collie? That was mine.

In 1998, I went down to Iowa City, Iowa to a stadium known as Kinnick Stadium. Don't look for it; it's not there anymore. But that night, I observed a game that redefined the limits of athletic competition. I remember being knocked out by their... their exuberance, their raw power - and their punctuality. That team was the world famous Iowa Hawkeyes. Fifteen years and multiple rape investigations later, the Hawkeyes are still going strong. And they've earned a distinguished place in college history as one of the worst returns on coaching salary investment ever. Head coach Kirk Ferentz was being out recruited by Paul Rhoads of the arch-rival Iowa State Cyclones, former conservative offensive coordinator Ken O'Keefe had been replace by even more conservative offensive coordinator Greg Davis, and renowned defensive coordinator Norm Parker had eaten too many Twinkies, lost a foot, and retired. Things were getting a little stale, so to speak.

So in the early spring of 2013, when I heard that the Hawks were moving their annual Spring Practice to a high school stadium in West Des Moines, Iowa on the same day that the rival Cyclones played their Spring Game on their home field, well needless to say I jumped at the chance to make the documentary - the, if you will, "jockumentary" - that you're about to see. I wanted to capture the... the sights, the sounds... the smells of a hard-working football program, on the road. And I got that; I got more... a lot more. What follows is a series of interviews I conducted with key members of the Iowa Hawkeye Football Program, as well as the uncut transcripts of several "behind closed doors" meetings. Stuff for only the true die hards.

But hey, enough of my yakkin'; whaddaya say? Let's boogie!

We were able to get head football coach Kirk Ferentz and his two offensive coordinators in one room, discussing Running Back woes.

Norman Underwood: Now, during the 2004 football season, who was your running back?

Kirk Ferentz: Arizona State. Jazz blues. Where was that?

Ken O'Keefe: And, uh, it was tragic, really. He exploded on field.

Kirk Ferentz: He just went up.

Ken O'Keefe: He just was like a flash of green light... And that was it. Nothing was left.

Kirk Ferentz: Look at his face.

Greg Davis: Well, there was...

Kirk Ferentz: It's true, this really did happen.

Ken O'Keefe: It's true. There was a little green globule on his spot on the bench.

Ken O'Keefe: It was more of a stain than a globule, actually.

Kirk Ferentz: You know, several, you know, dozens of people spontaneously combust each year. It's just not really widely reported.

The following are excerpts from a series of interviews with the Hawks' current offensive mastermind, Greg Davis
Greg Davis: All diagrams lead to horizontal passes as being the most effective form of ball movement

Norman Underwood: Oh, I see. And most schools throw the ball downfield?

Norman Underwood: Does that mean it's better? Is it any better?

Greg Davis: Nowhere. Exactly. What we do is, if we need that extra push over the cliff, you know what we do?

Norman Underwood: Why don't you just throw downfield on occasion and make the opposition cover more of the field?

Greg Davis: We're very lucky in the band in that we have two visionaries, Kirk and Ken, they're like poets, like Shelley and Byron. They're two distinct types of visionaries, it's like fire and ice, basically. I feel my role in the band is to be somewhere in the middle of that, kind of like lukewarm water. But whose not to say I haven't had my visionary moments? I've gorged on Bear Claws maybe 400-500 times.
(goes into diabetic coma)

Regarding the Spring Game switch from Iowa City to Des Moines 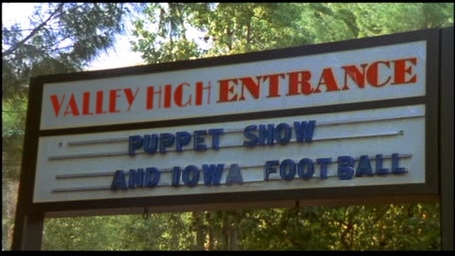 Gary Barta: The Iowa City gig has been cancelled...

Gary Barta: Yeah. I wouldn't worry about it though, it's not a big college town. We're going to Des Moines instead.

Gary Barta: Yeah. It's in India or something.

Norman Underwood: Given the history of Hawkeye running backs, uh, in the past, do you have any fears, uh, for your life?

Barkley Hill: When I did join, you know, they did tell me - they kind of took me aside and said, "Well, Barkley, It's, you know, it's like this..." And it did kind of freak me out a bit. But it can't always happen to every one, can it? I mean, really...

Norman Underwood: Because the law of averages...

Norman Underwood: ...Says you will survive.

We were able to visit one-on-one with former defensive guru "Shoeless" Norm Parker about his health problems.

Norman Underwood: Do you feel that Type II adult diabetes and subsequent amputation keeps you a child? That is, keeps you in a state of arrested development?

"Shoeless" Norm Parker: No. No. No. I feel it's like, it's more like going, going to a, a national park or something. And there's, you know, they preserve the moose. And that's, that's my childhood out there on the field. That moose, you know.

Norman Underwood: So when you're coaching you feel like a preserved moose on crutches?

Here, I was able to get up close and personal on a conversation between Iowa President Sally Mason and Coach Kirk Ferentz regarding the 2013 Hawkeye football poster... 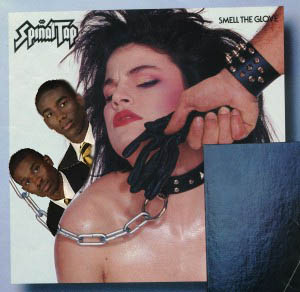 Sally Mason: You put a greased naked woman on all fours with a dog collar around her neck, and a leash, and Everson and Satterfield double teaming her, and pushing a black glove in her face to sniff it. You don't find that offensive? You don't find that sexist?

Sally Mason: That's right, it's 2013! Get out of the Steve Alford era. We don't have this mentality anymore.

Kirk Ferentz: Well, you should have seen the cover they wanted to do! It wasn't a glove, believe me.

After Sally Mason shoots down the boys' idea for the 2013 football poster, they receive a copy of Iowa State's football poster which features this image: 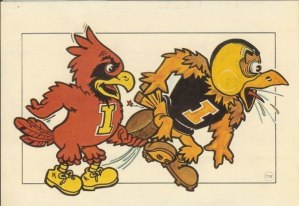 Kirk Ferentz: Whadda' ya mean their poster is fine? Its much more offensive than ours.

Gary Barta: Boys, settle down. You see, the reason they're all so upset about this year's football poster is because, you know, its the lady with the chain around her neck, getting raped by the defensive back. Their poster just features Herky getting cornholed by a Cardinal.

Greg Davis: Ohh... Its because, our poster has a woman and their's has a bird.

Gary Barta: Yes. Exactly. That's the genius of it. That could have been your idea, but yours was stupid. Its a fine line you know?

Kirk Ferentz: Yeah. Its such a fine line between stupid, and uh...

Well folks, there you have it. The guts, the glory, the passion, the... the... brilliance.