The NFL Opens Its Presents

Time for good little teams all over the country to find out what they got in the draft.

Share All sharing options for: The NFL Opens Its Presents

It's Sunday morning in April. But this is no typical Sunday; this is the Sunday after draft day in the Eneffell household. A large, bustling household, the Eneffell's currently have 32 children, some adopted, some not. Now don't kid yourself, taking care of all those children can be a chore. More often than not, the little ones fight a few times a week, usually Sundays and Mondays. Sometimes Thursdays. But deep down, the Eneffell's love each other unconditionally.

And the Sunday after draft day is a very special day, a day of wonder and delight for the Eneffells. A day for every team to shake brightly colored packages, rip the wrapping paper off their acquisitions and make wild predictions about all the fun they'll have with their new toys.

Why, look here! It's Carolina, first down the stairs! One of the youngest members of the Eneffell clan, Cary was adopted in 1995, and is as precocious as the day is long. After experiencing unprecedented success at a young age, Cary hit an awkward patch in the last few years, as teenagers often do. But with age comes maturity, and the last few draft days have been very good ones for Cary.

Befitting Carolina's youthful spirit, Cary just dives into the pile of presents with glee! And what does young Cary emerge with? Why, it's everyone's favorite, AJ's Kleinopoly! While Cary just got a very similar toy last year, Kleinopoly provides hours of fun for the whole family. A game that requires intelligence, a high level of skill and speed to play, Kleinopoly takes a minute to learn, but a lifetime to master. Cary should be VERY happy with all the options Kleinopoly will provide for those lazy Sunday afternoons in the fall.

And who's next into the room? It's lucky, jovial San Francisco! Francisco certainly has a lot of presents to choose from this year, I wonder which one he'll pick?

Well, this is a delightful surprise! After a little trading with his brothers, Francisco unwraps a brand new bike! A red and gold Bykowski, with a handy Cart on the front. This Carter Bike-owski is a tall, sturdy model, suitable for driving around fields. And that Carter! That will undoubtedly come in handy for hauling trophies and other assorted hardware back home to the bay area. Who's got it better than him? 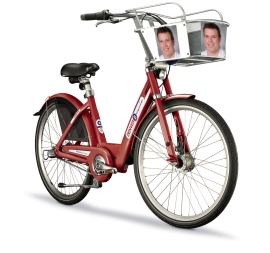 Next in line to open their presents is little Philadelphia. What Phil lacks in size, it more than makes up for in attitude. Phil can be a bit of a bully at times, but his heart is in the right place. Just don't turn your back on him; he might whip a battery at you (That Phil! Such a prankster!)

Oh, little Phil... He sure opened his gifts quickly, but it looks like he still isn't happy (Little guy never is! He should learn the meaning of brotherly love!) But how about that, it seems that Phil found another nine presents stashed around the house! And the finest of this extra bounty is a Knott Wheels toy car! The toughest toy car on the market, Knott Wheels can stand all manner of abuse and keep on running smoothly. Even if a wheel falls off, you can just pop it back in its socket and Knott Wheels will keep running all through playtime! It looks like this Knott Wheel is a little banged up from previous playtimes, but it runs just like new. One hopes that little Phil loves his new Knott Wheel just as much as the former owner did.

Well, who's this now? Boastful Jet flies into the room and practically tackles the first present he sees! That Jet quite is the excitable fellow, although sometimes his mouth could use a good scrubbing with soap. But that's to be expected from the curious, quick-tempered Jet.

It seems as if Jet has torn through all his presents, but his avarice knows no bounds! He's moved onto his stocking, to see what awaits him there. And what should his wondering eyes spy perched atop the mantle? It's an oversized, cuddly McDonough bear, all for Jet! Long arms and a low center of gravity, perfect for hugging all of Jet's brothers. Why, this McDonough bear cuts a mighty impressive figure, it should have no problem adjusting to its new home. 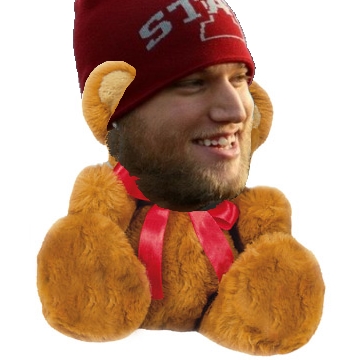 Last but definitely not least, who just awoke from his slumber? Why, it's gruff old Chicago Barry, rubbing the sleep from his eyes! He ambles in to sift through his gifts, yawning all the while. Although Barry is one of the oldest children in the Eneffell family, he's been a little down in the dumps lately. Maybe this year's draft will cheer him up!

And just look at what Barry finds in his stocking after he's unwrapped all his presents. A brand new G.I. Josh Lenz! A receiver, with kung fu grip. Barry could always use another one of those; most of the receivers he currently plays with aren't very nice. This should cheer sleepy old Barry up.

Yes, it certainly has been a wonderful draft day in the Eneffell house. All the children look forward to playing with their new toys, and hopefully they'll provide years of enjoyment for little Cary, Francisco, Phil, Jet and Barry. At least until this fall, when they declare that every last one of their toys suck after a particular rough afternoon of play.