Like many of you, I'm eagerly anticipating the return of Arrested Development and I'm sure I'm not alone in that I've spent the last several weekends binge-watching every episode on Netflix to get caught up. Even when enjoying a great program like Arrested Development, I still find myself (for better or for worse) drawing parallels to Iowa State football. Going into his fifth season in Ames, one could argue that the football program itself is in a state of arrested development. Yes, Paul Rhoads has brought respect and excitement to Cyclone football, but the facts are this; Iowa State has three straight losing seasons, has never won more than 7 games under Rhoads and from a talent perspective, ISU still ranks near the bottom in the conference when it comes to pure talent on the field.

Now, please don't confuse this with some sort of bash session, because that couldn't be further than the truth. You won't find a bigger Paul Rhoads fan than me, but I'm just trying to make a point for the sake of tying a great show and my alma mater's football program together, and besides, as Iowa State fans, our sanity depends on being able to laugh at ourselves from time to time. Which leads me to this...

I know this concept isn't unique and many have pulled off something similar, but I was struck by how many quotes the show had to offer that paralleled a certain aspect of the ISU football program. So here are a few of the more famous quotes from this terrific show and how they made me think of Iowa State football.

J. Walter Weatherman: And that's why you always leave a note.

How unfortunately apt this quote is to Iowa State's off season. It was revealed in April that Iowa State had self-reported recruiting violations to the NCAA, the majority of which included improper documenting of phone calls to recruits. As a way to teach his children valuable life lessons, George Bluth Sr. would often call on his friend J. Walter Weatherman, who'd lost his arm, to carry out these hilariously graphic lessons. This lesson in particular revolved around leaving a note as you can tell, which immediately made me think of all the undocumented calls Iowa State placed to recruits which appeared to be minor in nature, but could carry serious consequences. Given that Iowa State self-reported the violations and conducted their own thorough investigation, one can hope that Iowa State has learned its lesson and that the NCAA doesn't feel so inclined to carry out further punishment.

Michael: (To G.O.B.) I really think the reason you and I always fight is that, since we were little, Dad's always played us off each other.

Michael and G.O.B. carry an interesting dynamic throughout the series. Although the younger of the two, Michael is tasked with carrying out the day-to-day operations of keeping the family together and that often involves corralling his brother G.O.B. This is how I picture the relationship between defensive coordinator, Wally Burnham, and offensive coordinator Courtney Messingham (and Tom Herman before him). In an offense-comes-first league like the Big 12, ideally, the Cyclone offense should be leading the way. Instead, it's been Burnham's defense that has kept Iowa State competitive. Through four years, the Cyclone offense has finished second to last in the conference in total offense every single year and only managed to crack the 25 points per game barrier this last season. The Cyclone defense, however, has been fairly stout under Burnham, including 2012 where ISU finished third in the Big 12 in points allowed with 23.3 per game. I don't know what goes on behind closed doors, but I imagine that Burnham (and Rhoads) have had enough of the defense being forced to carry the load and are ready for the offense to step up. The good news is that by all indications, the 2013 Cyclone offense could be the best yet under Rhoads, which makes me hope that what we saw in the spring game was not another one of G.O.B.'s (Messingham's) illusions.

Michael: [after George Sr. has been handed a jail sentence] They're going to keep Dad in jail until this whole thing gets sorted out.

[silence amongst the family]

Michael: Also, I've been told that the company's expense accounts have been frozen...

Michael: ...Interesting. I would have expected that after "they're keeping Dad in jail."

Just as Michael is surprised by the reaction he receives from his family after delivering that news, I continue to be surprised by the reaction our fan base has had toward attendance figures. The fact is, attendance has never been better in Jack Trice Stadium. Iowa State set a season ticket record in 2012, selling more than 40,000 season tickets for the first time and the ticket office had a release last week that stated they expect to surpass that amount and set another record for 2013. Couple that with the recent additions of the gigantic video board in 2011 and the new football facility that opened toward the end of last season and its obvious that things are going well. Fan enthusiasm is at an all-time high, Paul Rhoads is finally getting the upgraded facilities he needs to recruit against more established programs and Jack Trice is packed every week, regardless of the opponent. So all is great then, right? Not so much, at least according to what you read and hear from the ISU fan base. S-E-Z. S-E-Z. S-E-Z. That's right, instead of being thrilled with where the program is and the progress Rhoads and Jamie Pollard have made, it always comes back to bowling in the south end zone. Look, I'd love to see Jack Trice bowled in and packed with 65,000+ just as much as anyone else, but given the current debt ratios the athletics department is facing paying for these other projects, the time just doesn't appear to be right. The SEZ will happen at some point. It was a pipe dream when Pollard originally took over in 2005, but if we fans continue to buy 40,000 season tickets every year and Rhoads throws in a 10-win season or two, that SEZ project might be closer to a reality than many of us originally thought. In the mean time, let's just enjoy the progress that the program has made. 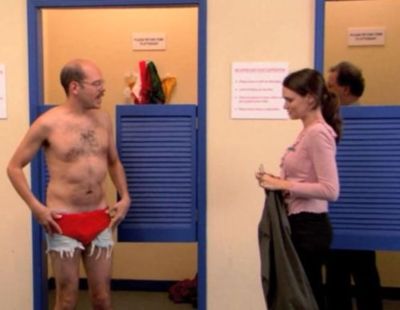 Tobias Fünke: [Tobias trying on a Speedo with his cut-offs on] Excuse me, do these effectively hide my thunder?

One of the best quotes from the show. It had to find its way in here somehow. This is what I imagine Paul Rhoads says every time he tries on a new pair of pants.

Tobias: I blew my wad on what was supposed to be a dry run and now I have quite the mess all over my hands.

Michael: There are so many poorly chosen words in that sentence.

One thing Paul Rhoads has been excellent about the past two seasons is firmly handling the non-conference schedule. Of course, this manifested itself in 3-6 Big 12 performances in both seasons. While both of those seasons have included some impressive conference victories, too often ISU has struggled to truly take care of business in conference play and has dropped numerous close games (see KSU every year, WVU last year, Baylor 2011, TTU last year) that really could have helped the program gain some upward trajectory. To demonstrate that we're making progress as a program, Rhoads is going to have to not only handle the non-conference season with the same results as recent years, but add at least one conference win to the overall total. Essentially, don't blow your wad in the non-conference schedule.

Lucille: Buster, what happened to your head?

Buster: Nothing. G.O.B. was just teaching me how to hit it with a hammer.

As the youngest Bluth sibling, Buster took a lot of abuse and punishment from his older brother G.O.B. Some of that abuse was the result of having a narcissistic, deviant older brother like G.O.B., but most of it came because Buster was young and didn't know how to protect himself. In that same regard, Sam Richardson similarly experienced some physical beatings as a young quarterback getting his first action in Iowa State's last three games. Not really known for his athleticism, Richardson surprised us all with his mobility, scramble-bility(?) and deceptive white-guy footspeed. In those three games, Richardson rushed for 43 yards against Kansas, 119 against West Virginia, and 46 against Tulsa (he also tossed in 25 yards for good measure against Western Illinois in mop up duty). Having a mobile QB is never a bad thing, especially when he's got the arm and accuracy to complete the total package, but I often found myself cringing every time Richardson took off last season. He hasn't mastered the art of avoiding hits yet and more than a few times, he was slow to get up after failing to get down and more importantly, get in a safe position. My hope is that this was just a product of inexperience, but if Richardson continues to play that style, we may see more of him on the sideline undergoing concussion examinationsthan on the field leading the offense.

Lucille: I'm having a problem with Buster.

Michael: Oh, we can just flip the mattress over and pretend like it never happened.

Ah, if only it were that easy. I don't know about you, but after that bowl game bed-wetting, I wish I could have just flipped the ISU football mattress in my mind and pretended like that didn't just happen. The fan turnout was incredible. The opponent was beatable. Iowa State got off to a great start, and then...what the hell is this? Three quarters later, we woke up to wet sheets and the unmistakable stench of our own piss. Unfortunately, this was the second year in a row this happened in a bowl game, meaning that "the mattress" can't simply be flipped and forgotten anymore.

2013 is going to be a challenging season for a young Iowa State squad. Ideally, after three straight losing seasons and consecutive bowl losses, this team would take the next step and finish the year on a high note, above .500 and with a bowl win. That's going to be awfully difficult. Nearly the entire defensive front 7 needs to be replaced and we're putting all of our eggs into the Sam Richardson basket. With all the young talent on the roster, there's reason to be excited about the future of the program. At some point though, Iowa State football needs to get out of this perpetual state of arrested development.