Share All sharing options for: Fred Hoiberg: Just Another Weekend In Awesomeness

But in the interest of keeping my average word-count-per-story up, and because my fiance is watching Real Housewives: New Jersey and I really needed an excuse to get away from that muff cabbage (the Housewives...not my fiance), let's recap The Mayor's weekend and count the ways he continues to shatter his monthly awesome quota.

The Mayor was invited to play in the Principal Charity Classic Pro-Am on Thursday, May 30th, in a pairing that included Indianola native and long time big leaguer, Casey Blake, as well as former Masters and British Open champion, Mark O'Meara. I don't know what type of golfer Hoiberg is, but I'm guessing he's probably good at that too because let's face it, what isn't he good at? And besides, even if he's not that good, all he has to do is flash that million dollar smile and everybody will forget about that drive he hooked on #7 that tagged an unsuspecting patron in the throat, but we all know that guy wasn't paying attention anyway and was "get in the hole!" guy, so nobody really minded (This did NOT happen).

Okay, so there he is, playing a round with with a two-time major champion and a borderline Major League All-star. This should be the highlight of Hoiberg's weekend, right? For any of us, this would probably be one of the highlights of our lives. For The Mayor though, bigger things await.

I Don't Do "Rebuilding Years"

So Hoiberg teed off at 9:00 AM on Thursday, played most of his round and then said good bye to his group and headed back up to Ames without even signing his scorecard (the tournament director invoked the "he's too cool to DQ edict" and just filled in pars for the rest of Hoiberg's round). Why was Fred in such a hurry to get back to Ames? Because he just so happened to be hosting one of the most sought after transfers in the country in Marshall transfer, DeAndre Kane.

After only a few short hours, news broke that Kane had committed to Iowa State and in turn, bolstered the Cyclone back court in a huge way. Naturally, Kane spoke glowingly about "Coach Fred" and his style of play and mentioned how excited he was to play his final year and to be a part of Hoiball. Here's what he told Randy Peterson of the Des Moines Register:

"The coaches – who wouldn’t want to play for coach Fred?" Kane said when asked about his decision. "Coach Fred’s been in the pros. His team plays that up-tempo offense that everybody wants to play. That style fits my game perfectly."

So now that Hoiberg had landed an experienced play maker to round out what is shaping up to be a promising rotation, you'd think he could put business on hold for the rest of the weekend, right? Not so fast. 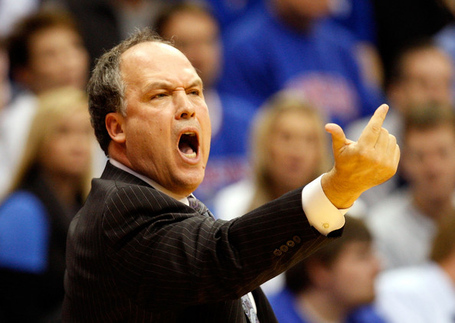 The departure of assistant coach T.J. Otzelberger left a gaping hole in Hoiberg's coaching staff when he announced he was leaving for Washington. It's been rumored for weeks that former Nebraska head man and more recently, Director of Basketball Operations at Kansas, Doc Sadler would be taking the open position. Chances are, this deal was probably worked out weeks ago, but Iowa State announced on Friday that Sadler would be joining The Mayor's staff and from Iowa State's release, Sadler had this to say:

"I am excited to work at a program like Iowa State and for a coach like Fred Hoiberg, who has quickly become recognized as one of the best coaches in the nation" Sadler said. "Having coached in the Big 12, I know how important home court advantage is and Hilton Coliseum is one of the best."

Sadler is known as an X's and O's specialist with a knack for both scheming and coaching defense, which oh by the way, just so happened to be one of Iowa State's weaknesses last year. Sadler may not have the recruiting reputation that Otzelberger had, but he does figure to be an upgrade in the planning and in-game coaching aspect. While we're on Otzelberger, that brings us to the conclusion of Hoiberg's incredible weekend.

The Guest of Honor

Like the rest of us, I'm sure Fred Hoiberg enjoys a nice wedding reception now and then. Who can turn down a free meal, some booze and a couple laughs with old friends? When you're Fred Hoiberg though, even when you're relaxing and having fun, you're still the center of attention. So while Hoiberg traveled to Otzleberger's wedding over the weekend to former Cyclone, Alison Lacey, he still couldn't escape his celebrity status. Just check out this picture Hoiberg tweeted out on Saturday night from the wedding.

Okay, so it's not the greatest picture quality, but that's a guy wearing a Fred Hoiberg jersey at Otzelberger's wedding. Though blurry, that appears to be Craig Brackins and Diante Garrett in the photo as well. I don't know what the hell was going on, but I'm just going to guess some dude heard Hoiberg was going to be at the wedding and decided to go all fanboy and rock The Mayor's jersey over his vest and tie. Can you really blame him?

Okay, so let's recap. A casual round of golf with a two-time major champion and a long-time major leaguer. A critical signing that could help put Iowa State in a third consecutive NCAA tournament. A brilliant coaching hire that might make Hoiball even more dangerous. And some guy randomly wearing Hoiberg's jersey at somebody else's wedding. Yeah, The Mayor is fucking awesome indeed.