Because it's the attention to detail that truly matters

Share All sharing options for: 10 Best Moments from the Channel 10 News Video

He's a great safety, but the latest 'Channel 10 news' video also shows Jacques Washington is a media-savvy guy with a good sense of humor and a great awareness of his audience. If there were any justice in this world, he'd be replacing Mark May, Skip Bayless, or any of the other out-of-touch hacks currently working in television today.

You know it's good when cameos by the Lord and Lady Fauntleroy of Big 12 coaches just barely makes the list. 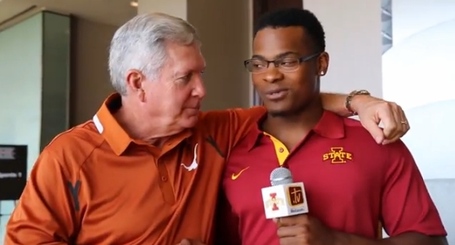 I love the stark difference at play here in these two little segments. Mack's tight-lipped "smile" seems forced, and clearly he's even uncomfortable with being described as the silver-tongued devil he is. Then he becomes self-conscious of that wariness. And then in true Mack Brown fashion he overthinks it and starts in on some sort odd non-sequitur rambling about being old that sounds like it might or might not be part of his standard recruiting pitch.

Stoops on the other hand seems very personable and plays along well enough to make you think he's almost human. Talks about playing under Hayden Fry in the early 80s and makes a point to get Jacques' name pronunciation right. (To the point where WRNL commenters were actually regarding him as a decent human being.)

Now ask yourself if you were a 4 star recruit, which of these two would you rather go play for? All hail our crimson and cream overlords. 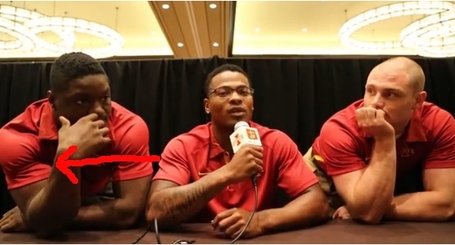 That guy is going to go Ivan Drago on someone this year.

8. Paul Rhoads Being a Big Dork 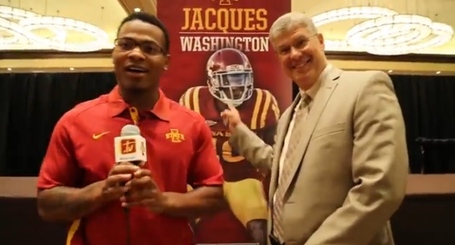 There's a reason it looks familiar - that's the same grin that a 5-year old makes when they walk past the digital video cameras at Wal-Mart and suddenly realize that THEY are the person on the TV. 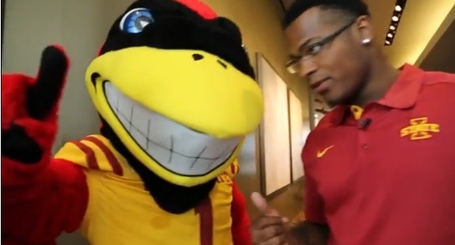 [Cy has no f*cking clue, makes #1 sign with opposite hand instead]

[Cy then proceeds to spasm erratically in what is supposed to be a dance.] 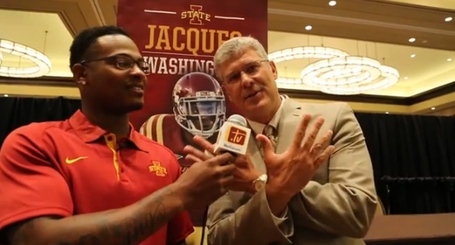 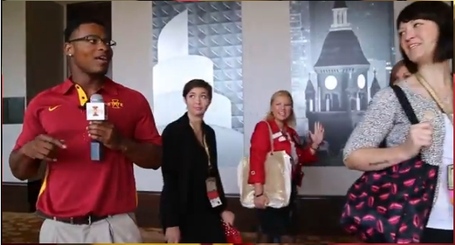 That's Channel 10 news for ya. Bringing diversity into the love lives of bored entrepreneurial housewives across Texas. 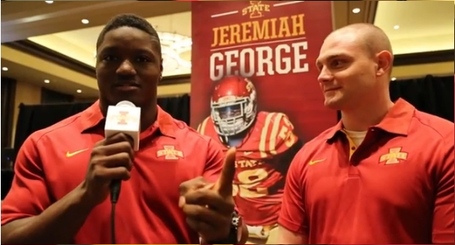 It's no secret that Woody is a melanin-deficient bulldozer when compared to the other 4 RBs on the roster this year. And while his response to Jeremiah's question about contributing is accurate, there's something very Iowa about self-deprecation coming from the guy who scored the game winner in the biggest win in ISU history.

Roles reversed, Jeff suggests that Jeremiah George is not an All-American Linebacker like Klein or Knott. Jeremiah suggests that he's right, and furthermore anyone who doesn't like it can go eat a proverbial bag of dicks. 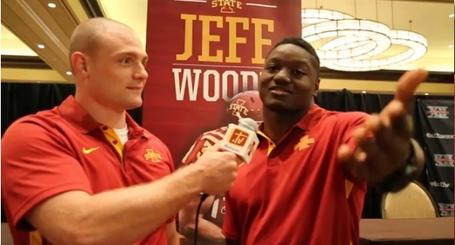 By the way, the drop he describes (from the top of the scoreboard) is over 100 feet.

It's no secret that we here at WRNL think it's kinda bullshit that the blogger responsible for covering the Big 12 for ESPN has never been to Ames in the three years he's held that position. Hell, he's already been to Morgantown. (And every other stadium in the Big 12, for that matter.)

Hell, this year we even offered to pay his way to come see the Thursday night game against Texas and he declined, despite no other Big 12 games actually happening that night.

So imagine our delight when we all saw this tweet:

Iowa State fans: You can see Jacques Washington grill me on my Ames absence at the :30 mark here. http://t.co/wSQ6OtN6tq

And at 47 seconds in, he delivers.

Ubben's reaction tells the whole story - that's the laugh of a person who knows he's just been called out on his mountain of bullshit and has no recourse. 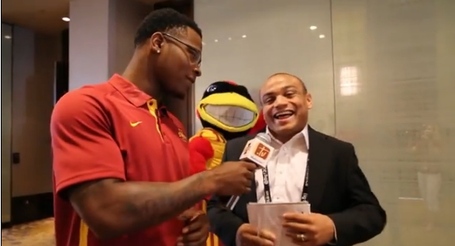 He recovers and claims to have been up there during "his first year on the job." (I'm going to assume that since he hasn't been there during his tenure at ESPN, he's referring to his time at the Columbia Missourian covering the Tigers.)

Not that we weren't fans already, but this is some god-tier trolling, and a solidly entertaining 9 minutes of video. Well done, Jacques. Well done indeed.

Honorable Mentions: Iowa State players not being allowed to actually touch the crystal football, Purposely mispronouncing "Lache," and @danivarley for her continuously incredible work in the ISU video department.