[EXT: Parking Lot outside of Big Tenitech - Iowa City branch. Gary Barta pulls his black 1977 Trans Am into a specially marked parking spot (License Plate: BLDPNCH) . He activates the alarm for his vehicle and walks in, waving to a disinterested Kirk Ferentz as he passes.]

[INT: A massive cubicle farm. As we follow Kirk to his desk, we hear a sing-song female voice continuously answering the phone and transferring calls with the same annoying introduction:]

[Kirk tries to tune out the annoying receptionist. He grabs a stack of recruiting reports and sits at his desk, chomping on his gum and staring into space. His boss approaches.] 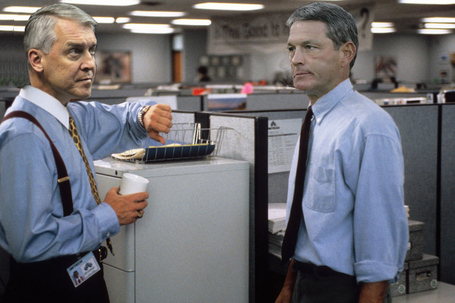 Hello, Kirk. Whaaats happening? Uh, we sort of have a problem here. Yeah. Apparently you didn't put one of the new B-1-G logo cover sheets on your BCS reports.

Yeah, sorry about that. I forgot.

Yeahhh... you see, we're putting the new B1G logo on all BCS reports before they go out. Did you get the tweet about this?

Yeah, Yeah. I've got the tweet right here, but uh, I just forgot. But uh, the BCS isn't until January, and I've already attached the new logo and re-sent the form, so there's no problem.

: Yeah. If you could just go ahead and make sure you use the new B1G logo branded coversheets, that would be great. And uh, I'll make sure you get sent another copy of that tweet. Mmmm, OK?

[Barta wanders off, mid-sentence. Kirk sighs, slumps dejectedly in his chair, and tries to resume reading his recruiting reports, but is interrupted by noises from the next cubicle over. He stands up and peeks over the cubicle wall to see that his co-worker, Greg, is listening to the radio.]

...THAT'S RIGHT. I'M TELLING YOU RIGHT NOW THAT CONFERENCE REALIGNMENT ISN'T OVER, AND NOW THAT WE HAVE PROOF TEXAS IS A TIRE FIRE WE'RE GOING TO SEE THE REST OF THE BIG 12 CRUMBLE UNTIL THE CY-CLOWNS FIND THEMSELVES HOMELESS AND THEN JAMIE POLLARD IS GOING TO HAVE TO OIL HIMSELF UP AND THEN WEAR A PARTIAL GIMP SUIT AND FLAGELLATE HIMSELF FOR THE AMUSEMENT OF THE MISSOURI VALLEY CONFERENCE BOARD MEMBERS...

Greg, could you turn that down a little bit?

I was told that I could listen to Miller and Deace at a reasonable volume from nine to eleven while I'm reviewing film...

No, no. I know you're allowed to. I was just thinking as like a personal favor, you know? It's hard to pick out the best two-star tight ends with the noise...

I, I told Barta that if Fran's going to listen to his anger management tapes while he's working, I can listen to Miller and Deace when I'm watching film....

I enjoy listening to the radio at a reasonable volume from nine to eleven.

[Kirk, defeated, sits back down. Another manager, Jim, approaches the cubicle.]

Hey Kirk, whaaaat's happening. Listen, we need to talk about your BCS reports...

[Scene: Lunchtime at the Cafeteria area inside of a nearby Hy-Vee. Kirk sits at a table with his friend Phil and his son Brian. Both also work for Big Tenitech. Kirk stirs another packet of sugar into a styrofoam cup of coffee.]

I mean, what if I'm still doing this when I'm 60? Calling the same four variants on a dive play and falling for fake punts?

It would be nice to have that kind of job security.

Barta's gonna have me work on Saturday. I, I can tell already. I'm doing it, well, because I'm a big pussy. I was scared of the League. Which is why I'm still at Iowa to begin with.

Uh, I work at Iowa, and I don't consider myself a pussy.

Yes. I am also NOT a pussy.

You watch your mouth.

[Pulls out notepad, looks directly at Brian, writes something down.]

They're gonna find out the hard way that I'm not a pussy if they don't start treating their assistant coaches better. I could negotiate a contract with complex incentive bonuses that would nickel and dime that whole athletic department dry!

Nah, I have to go to this hypnotherapist with your Mother. She thinks it will help me become a more aggressive person. Apparently he's been working with Fran and helping him express his anger in a healthy way.

Didn't he throw a chair last year during a game?

Yeah, I know. Like I said, he's really good!

[Scene: Parking Lot, Outside of Big Tenitech. As the three friends return from lunch, Greg Davis approaches in a half-run, sweating profusely and gesturing towards a piece of paper in his other hand. Upon closer inspection, it is a printout of a Deadspin article titled "The Hottest Seats in Coaching."]

HAVE YOU GUYS SEEN THIS? WE'RE ALL SCREWED!

What are you talking about?

They're bringing in consultants! That's how I know! That's what this staff meeting is all about! They're going to downsize us!

Greg, every day you say you're going to lose your job, and somehow you're still here.

You know, there's people in life who don't have to put up with this shit. Like that guy who invented the 3-3-5 defense. You see, THAT'S what you have to do! You have to use your mind to come up with some really great idea so you don't ever have to work again!

That guy had a DC job in The League! You know, I had an idea like that once...

Really? What was it?

This is the worst idea I've ever heard.

Yes, this idea is shit.

Hehehe Yeah! It's bad like poop! From a butt!

[Takes out notepad, scribbles something down.]

Uh, look - I have to get out of here. I'll talk to you guys later, assuming I still have a job.

[Scene: Kirk and Brian's Apartment. Due to the relative low quality and thickness of the Section 8 housing walls, various muffled screams and thuds can be heard throughout the building.]

...so then I thought "Naked Bootleg in our own end zone?" They'd never see it coming...

Dammit, Dana! Can't you just pretend like we can't hear each other through the wall? Just come on over.

[10 seconds later, Dana enters. He excitedly flips through the channels, finally settling on a close-up of a sand-covered female ass wrapped in spandex shorts.] 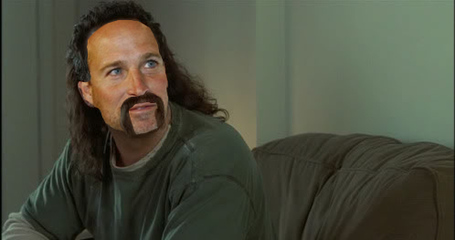 Shit man, I thought you'd want to see this.

[Dana sits and stares intently at the action on screen. Kirk is lost in thought for several minutes before speaking.]

What would you do if you had a 20 million dollar buyout?

(Without hesitation) I tell you what I'd do, man, Run two QBs at the same time, man.

That's it? If you had a multi-million dollar buyout, you'd run two QB's at the same time?

Damn Straight. Always wanted to break 1,000 passing yards in a game. And I think if I had a two QB offense and that kind of job security, I could hook that up.

How about you? What would you do?

You know what I'd do? I'd sit on my ass, and I'd do nothing all day. Absolutely nothing.

Shit man, you don't have to be rich to do nothing. My defense is broke, they don't do shit all day.

[Scene: Later that evening. The hypnotherapist's "office" is located in a strip mall, nestled in between an out-of-business Office Depot and an all-you-can-eat Chinese Buffet. Kirk glances at the crudely stenciled "Professional Hypnotherapist - Nights Only" sign and walks inside to meet the doctor.]

...and then the copier jammed again. Wait, Are you sure we've never met before? You look awfully familiar.

So anyway, I'm sitting in my cubicle today and I realized that ever since 2009, every single day of my life has been worse than the day before it. So that means that every day you see me, it's on the worst day of my life.

What about today? Is today the worst day of your life?

But is there any way that you, you could just sock me out so there's no way that I'll know I'm at work? Right here? (points to his head.) Can I just come home and think I've been fishing all day or something?

That's really not what I do, Kirk. However, the good news is, I think I can help you. I want you to try and relax. I want you to relax every muscle in your body, from your toes to your fingertips.

Good. You're beginning to feel your eyelids get heavy as you slip deeper and deeper into a state of complete relaxation. Your concerns over eligibility and ACLs are melting away. Down, Down, you go. Your worries are melting away.

[Dr. Rhabdo's eye begins to twitch, and he begins to sweat profusely]

Now, when I count backwards from three, you will be in a state of complete relaxation.

["Dr. Rhabdo" collapses on the floor, stone dead. We pan up past a very serene-looking Kirk to a day calendar on the late therapist's desk. The date is August 30th, 2013.]