A genuine plea from one fanbase to another

Hey, Hawkeyes. It's hateweek, and the CyHawk game is just a few days away. This is one of two weeks a year that I pay any attention to your school, and I imagine you're probably the same way. So this is probably as good a time as any to say something that needs to be said. Now, what I'm about to say might sting a bit, but trust me; it comes from a place of love. A love for the state that our respective universities share.

You need to stop embarrassing Iowa.

I don't mean the University of Iowa directly embarrasses our state. The university is just a collection of buildings, ideas and faculty. These buildings and ideas aren't embarrassing (well, the time you nearly burnt down the Old Capitol Building was pretty embarrassing) It's more the actions of your fans, coaches and players that are so mortifying.

You tout your reputation as the flagship school of this state. It would be nice if your fans, coaches and players acted slightly more respectably. Iowa has a reputation as a friendly, intelligent, humble place, but your actions lately have been anything but.

In recent years, there's been a rash of illegal, illicit and flat-out embarrassing actions emanating from your fans and athletic department. Below is a by-no-means complete list of just a few things from the past few years that I could remember off the top of my head. I know this kind of behavior is ingrained in your DNA, but WRNL is begging; no, make that pleading with you to please not act like this in the future.

Hawkeye House Painter: Buddy, we all have dreams. Some of us dream of writing the next great novel, working for NASA and flying to Mars, playing in the NFL... Your self-described dream was to have Kirk Ferentz come autograph the house you painted black and gold. Maybe set your goals a little higher.

And it's fine if you're not a great artist. Most people aren't. But most people don't paint Hawkeye logos that look like they're afflicted with Marfan Syndrome on their goddamn houses, either.

The story behind this Hawkeye house (via kccitv)

Top party school in the nation: You may not realize this Hawkeyes, but this designation is not a good thing. The methodology the Princeton Review uses is a combination of student surveys and arrest reports from the university. Hell, West Virginia won the top "honor" last year. While West Virginians are excellent people who know how to throw a damn good riot, no one can make the legitimate argument that Morgantown has a better atmosphere than college towns like Athens, Austin or Madison. The students in those schools just hold their liquor better and don't get arrested.

This ranking isn't impressive to anyone over the age of 24. Why is your school trying to impress a bunch of 19-year olds? I don't know if you've met any teenagers lately, but they're kinda dumbasses. That's not saying they'll never grow up to be interesting people someday, they just aren't interesting people right now, because they haven't experienced very much of life yet. Stop trying to impress people with no life experience, Hawkeyes. 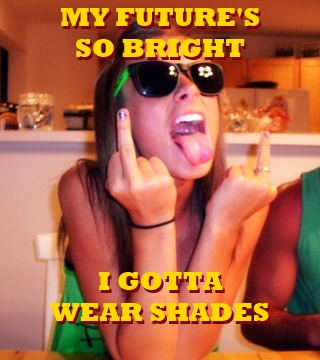 But if for some reason you DON'T want a career in the sex industry, you might be able to parlay your internet infamy into a gig as one of those liquor promoters. Just think of the years and years stretched ahead of you, drinking and snorting coke in exotic locales like Myrtle Beach, Cabo San Lucas and Lake Havasu. Beautiful vision, isn't it? Imagine it: 37 years old, taking care of the baby that no-good asshole Ron left you with, waking up at 2:00 PM in a motel room off the strip so you can pick up your candy shooters and beads and get down to the club in time for the happy hour crowd.

But maybe there's something else out there. You're getting a little tired of passing out at 4:00 AM after pushing Fireball on drunken spring breakers day after day. Those bags under your eyes are getting darker every day. Gonna stop the yip-yap too, starting today. All that blow really isn't good for your anxiety. And hey, you saw that ad on that billboard about insurance sales. What would it hurt to call them?

Yeah, insurance sales... Work in an office, get health benefits... Maybe today's the day your luck changes. It's been 15 years. No one remembers .341 anymore, right? Yeah, a career change could be just what you need...

"I'm sorry, you said your name was Samantha Goudie? Let me just run that through my computer..."

"I'm sorry, the position has been filled"

No, it's fine, you tell yourself. You didn't want that job anyway. You're doing fine just where you are. LIVING THE DREAM. Still... maybe a quick bump. Just to get your head straight.

Jesus, Vodka_Samm, your story is like the Metrodome-Bathroom-Sex-Lady: The College Years. Speaking of...

Metrodome-Bathroom-Sex-Lady: Hawkeyes, what the hell is wrong with your fanbase that this is typical behavior? Most people don't get so drunk at tailgates that they sleep with a complete stranger at a football game. If they do, they usually have the decorum to find a hotel room or an apartment or something. Even a car would be more private than the bathrooms of the Metrodome.

And good lord, the Metrodome opened in 1982. Just think about the years of encrusted piss, shit and vomit that you were rolling around naked in... If you didn't have every STD before that little episode, you definitely do now.

Kirk Ferentz and his obscene contract: As most Hawkeye fans will be glad to tell anyone who will listen, the University of Iowa's athletic department is in the black, and a financially stable athletic department can pay their coaches whatever they want. The University of Iowa happens to want to pay Kirk Ferentz $3.835 million dollars a year. That $3.835 million worked out to $958,750 per win in 2012. That's the worst return-on-investment of any coach in the nation, save one: Charlie Weis.

Dammit Hawkeyes, Iowans are known as a thrifty and fiscally responsible people! Your profligate ways are tanking our state's reputation!

Notti Boy: A pasty meth-addict that looks to be made up entirely of canned hams and Cheetos is not an appropriate person to write your hip hop anthem, Hawkeyes. The bravado he shows, despite his clear limitations is inspiring, though. Kind of in the way one might be inspired by a disabled kitten struggling to climb the stairs. Go lil' guy, go!

Iowa Gurls: Jesus, how many of these videos are there?

Rhabdoyle: People need their muscles. Specifically, people need their muscles inside their bodies. Muscles help keep people ambulatory and upright. Unfortunately, muscles can't serve their intended purpose when they're in the toilet after some poor sophomore pissed them out in a fit of agony after being pushed too hard by some sadomasochistic trainer who needs to find out which players "want to be there."

The rhabdomyolysis case is like Iowa football in a microcosm at the start of the decade. A program on the decline, reeling after an unsatisfying season. Players pushed to do things they physically can't do, which in turn scares more recruits away. A head coach, away on a trip, checked out and unavailable. A cursory investigation by the university, which recommends slight changes but finds no real wrongdoing.

We've seen this pattern repeat over and over again. Whether it's the university explaining how someone like Vodka_Samm managed to make it through school, or an addled fan in Rippey turning his house into a gigantic eyesore, or Kirk Ferentz berating reporters who happen to question his job performance, this shit gets old. It gets tiring for everyone. So please, for all Iowans; step your game up. Stop embarrassing our state, Hawkeyes.