The Ten Best Moments From The Hawkeye House Story

Because it's the attention to detail that really matters.

Share All sharing options for: The Ten Best Moments From The Hawkeye House Story

Yesterday, WRNL introduced you to Cory Brown, a Hawkeye fan from Rippey made famous by an extremely slow news day (and KCCI) for turning this: 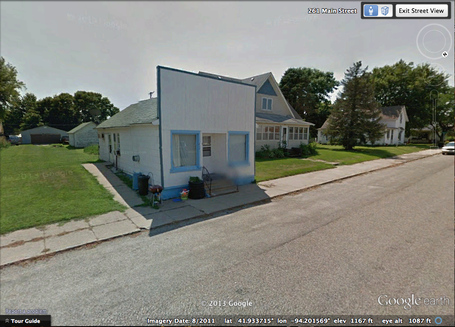 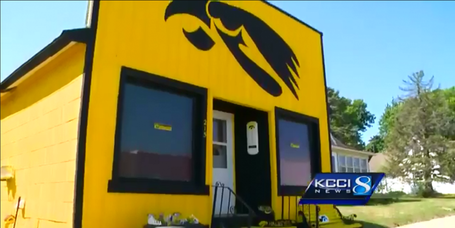 WRNL was so smitten with Mr. Brown's curious blend of addled exuberance and commitment to bringing down property values in his neighborhood that we felt it necessary to explore this video in more depth. So without further ado, the ten best moments from his transformation, presented in chronological order:

1) Not even a rock is safe from AIRBHG 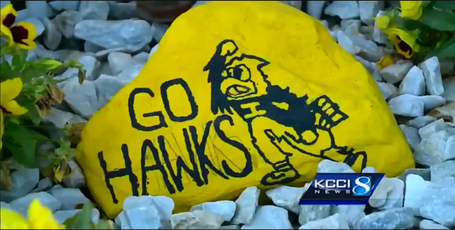 Poor Herky. That left knee is suffering some serious Jermelle Lewis/Albert Young/Marcus Schnoor/Jewel Hampton/Jordan Canzeri/Barkley Hill-level stress. Get a brace on there before you suffer the fate of anyone unlucky enough to tote the rock for Kirk Ferentz.

2) Wonder at the splendors of the Hawkeye Rock Garden! 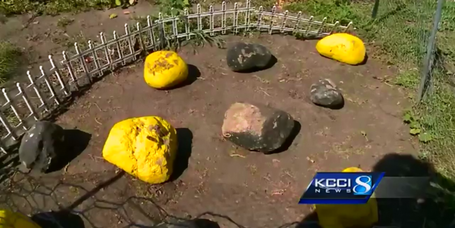 Gaze upon the glory of eight sadly painted rocks placed in a scattershot pattern in a fenced-in enclosure. The yellow rocks represent the total number of wins from Iowa's 2012 season, perhaps? 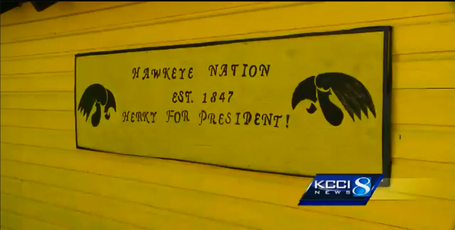 Those poor logos. They look like those dogs that need to have their eyelids periodically trimmed so they can see. Not so much a Hawkeye in Mr. Brown's depiction, more of a Hawkeye. 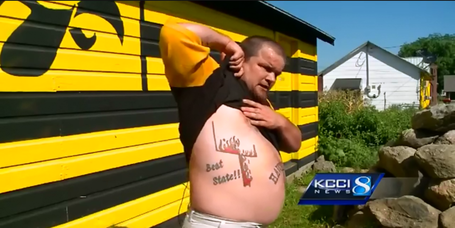 Anytime you take a needle and permanent ink to your flesh, you're making a statement that says, "Yes, this is something I feel very passionately about." Or you're blackout drunk in Tijuana. One of the two.

Both are very real possibilities in this case. Mr. Brown wants his favorite team to beat Iowa State (and burn down a goal post too, I guess?) so badly he had it permanently drilled into his torso. IOWA FANS DON'T CARE ABOUT THIS GAME.

Okay, small comment. Notice the little backwards stumble as Mr. Brown looks up to the camera? That is stumble that says, "Hell yeah, it's 1:00 in the afternoon on a Tuesday, but I am on the TEEVEE. Of COURSE I'm four beers deep." 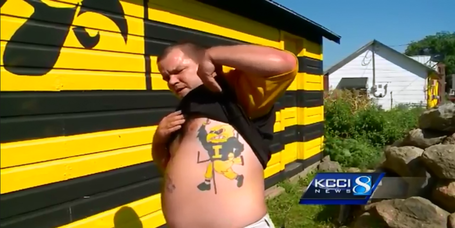 Good god Cory, stop drawing Herky before you kill the poor bastard. Hawkeye running backs have had an exceptionally bad string of luck in Kirk Ferentz's time in Iowa City, but at least none of them have ever been gelded by a goalpost (yet). 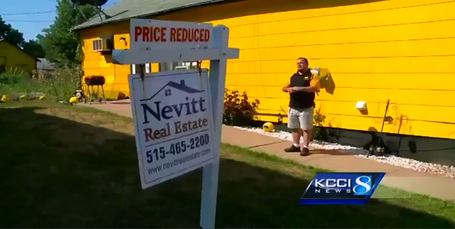 "Yeah, I painted it before I wanted to sell it."

Indeed you did, Mr. Brown. You did, and the results are glorious. Sure, maybe there aren't as many offers as you'd initially imagined. But fuck the haters. They just can't handle your SWAG. That die-hard Hawkeye fan will be along any day now, just chomping at the bit to pay you straight cash for this black-and-gold beauty. 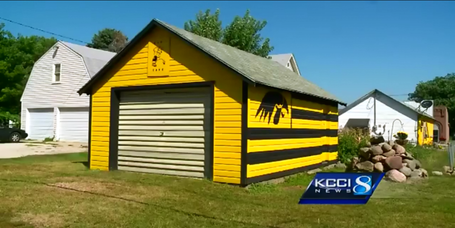 "Hey, can you tell I missed a spot out back? I think I hid it pretty good with that pile of boulders."

C'mon, Mr. Brown. You had enough paint to cover the garage, but you couldn't finish the back of your house? Hayden Fry is spinning in his grave right now (What? He's not dead yet? Good lord...).

And while we're back here, Calvin should probably hydrate more. That color doesn't look healthy. 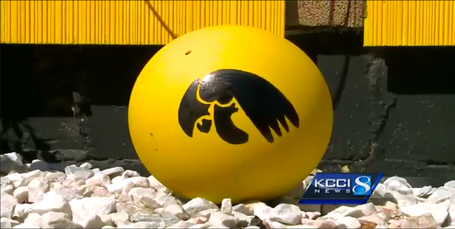 Herky, you need to realize that you are beautiful just the way you are. Well, not beautiful exactly. But you have a certain... unique charm that can be very appealing in the right light. Don't listen to those bitches in the fashion magazines, you don't need a nose-job. Your nose balances the rest of your face!

Oh, it's for a deviated septum, is it? That's bullshit. Herky, you've never snored in your life. This is pure vanity and you know it. Just don't come crying to me if the doctor botches the operation.

The story behind this Hawkeye house (via kccitv)