BHGP and Gary Barta can't pull their weight this year, so WRNL ponies up some dough for a charitable donation in their name.

Share All sharing options for: Thank You For Finally Helping Farmers, Hawkeyes

2013: Another year, another CyHawk game, another hate week coming to an end. It's been a wonderful ride this year, with lots of banter between Iowa State and Iowa fans. Hawkeye fans made a lot of Super Bowl and little brother jokes, Cyclone fans implied that Iowa City was some kind of soul-destroying nightmare-factory from which there is no escape.

Unfortunately, everything wasn't as great as it could've been. Last year, Hawkeye fans were so vociferous in defense of their beloved Hawks, they gave WRNL enough pageviews to fund their very own States-level donation to the Cyclone Club. Thanks, Iowa fans! Your support makes Iowa State athletics possible!

But this year, not so much. There just haven't been many Hawkeye fans mixing it up on WRNL this week. Kinnick attendance is down, too. The fewest amount of fans since 2003 turned out to see Iowa limp past Missouri State last week. What's going on, Iowa fans? Was it the 4-8 record last year? Was it the loss to Northern Illinois to start this season? Is it the grim specter of six more seasons of Ferentz-ball staring you in the face?

But still, there's been enough of a spike in in WRNL's site traffic for SB Nation to give our editors an early bonus. And being the giving souls that we are, we realized that this money isn't really ours. It's your money, Hawkeyes. Money that we'll graciously invest back in the community for you. Last year, Hawkeye fans were so generous with their attention that you allowed the Hawkeyes' excellent SB Nation site Black Heart Gold Pants to donate $199.80 to the Cyclone Club; an amount that had special significance for fans of both teams.

Now this is tough to say, but unfortunately Iowa fans just haven't lived up to the bar they set last year. There's just not as many bandwagon-riders around this year, and site traffic is down. A few bad seasons, and a bunch of you just vanish. Shameful.

But we still wanted Black Heart Gold Pants to be able to donate an amount that had a specific meaning for both fanbases. So Hawkeye fans, pat yourselves on the back. You've generously donated $96 to the Cyclone Club this year. You can see your receipt at the top of the page, and your thank you letter and Cyclone Club materials will be sent directly to Gary Barta so he knows exactly how much you enjoy this rivalry.

Still, something wasn't right. Only $96? That's such a small amount for such a storied rivalry. Then it came to us: WRNL's AHF t-shirt was the best-selling shirt in the entire SB Nation network last month. WRNL is ROLLING in that t-shirt money right now! 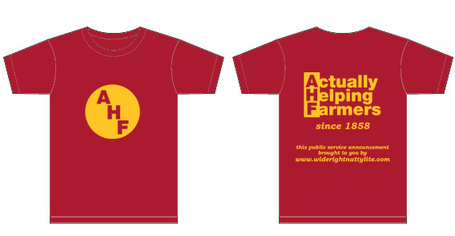 So rather than rely on the fickle nature of Hawkeye fans for a donation to the Iowa State athletic department, WRNL decided to take the AHF message to heart and actually, you know, HELP FARMERS. The profits from WRNL's AHF shirt sales have been donated to Iowa State's College of Agriculture, ensuring that Iowa State will continue to provide farmers all across the world with the cutting edge tools and research they need to feed the planet, combat climate change and create a sustainable future in Iowa's rural areas.

So thank you again, Hawkeye fans. True, you weren't as supportive this year as you have been in years past, but that's to be expected from a program in decline. But take heart, Iowa fans: You're all Cyclone boosters now, and you're finally helping those farmers!